It would be a 07:00 departure to make sure that we were all secure in Mylor in advance of the gales.  It was me up and about first, busying around the boat getting her ready to leave.  It was pretty calm on the water in Fowey, but we could see waves just outside the entrance.  We were eating breakfast as we exited Fowey’s sheltered waters – we weren’t sure that any of us wanted to make food when we were out there!

Pete seemed determined that we were going to sail as much as possible, so we were hauling the mainsail just about as we were off the mooring!  It slightly interfered with me making breakfast, but no stopping him!  We had a reef in the main, and the yankee – ready for the forecast winds, but there wasn’t quite enough to get us going very quickly… Just as well as we were trying to eat!  All credit to the skipper, he had the engine on for all of five minutes.

We noticed that Harmonii was off her mooring, so she was on her way.  We thought she’d be making much the same course, heading for the shelter of Falmouth.  We were somewhat surprised to hear her radio an anchored ship off the Manacles.  No worries, we thought, she’s getting as far ahead and will be off to Penzance.

Pete and Tim were ‘racing’ a Halberg Rassey 39, which we drew near at Gribbin Head.  At one point he seemed to be keeping pace with us, but soon enough, he was disappearing in our wake.  We couldn’t really understand why, but the guys seemed pleased.  Tim was trimming the main constantly, but Whinchat was flying.  Pete helmed all the way; Tim and I were all good just wedged in the cockpit.

The miles passed quickly, and we made excellent time.  Approaching St Anthony’s Head in many ways is like coming home – we’ve sailed in Falmouth Bay on many occasions.  Our destination was Mylor Yacht Harbour, where we kept her for a few weeks last year too.  Almost her second home!  The mooring guys were there to help us in – thankfully.  Mylor is exposed in an Easterly, and it was know blowing 25knots.  We were on E pontoon, mooring in a very tight space with this roaring crosswind.  Tim and I couldn’t get onshore at first, but Chris (I think) sweated us in.  It was remarkable, but we were on a port tack alongside!  Whinchat was certainly heeled over against the wind – despite mooring lines everywhere!  An extra long line from the stern, just incase.  I noticed that the lazy jacks for the stack pack had broken, presumably caught by the main at some point.  It’s the first time that it had broken, which is testamount to the strength of the wind. At 11:30, we were all secured.  Brilliant passage time from Fowey!

We had a lovely Remoska’d lunch of pasties bought in Fowey – I have no idea who said so, but it’s apparently supposed to be bad luck to eat a pasty on stage. Hey ho.  Pete doesn’t seem bothered, but then he’s not really superstitious. 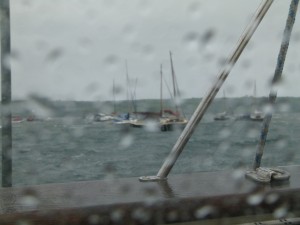 What about Harmonii?  Well, one of the joys of AIS is that you can track boats you know the name of.  We checked later, and she was in the Scilies.  Between Tresco and Bryer.  In a gale?  Oh my!  No real protection, and all of us believed she would have had a horrible night.   However, she was still there the next day… And possibly the next.  When we’d got back home, Tim was still following her.  He texted us to say that she was in Dartmouth – or somewhere along the south coast.  Clearly whatever had happened in the Scilies, hadn’t been great, so she was not going on to Ireland.  The last we noted, was that she was in Port Hamble… where’s she’s been for a while.  Part of me keeps on meaning to see if she’s for sale.  Apparently it happens from time to time – an over zealous skipper testing things a bit too far, resulting in his wife saying “it’s me or the boat…”