Our exit from Dartmouth was far less eventful than our arrival, and was completely as scheduled.  07:00, we were slipping our lines, with no errors in the setting of the alarm on this occasion by your truly – that’s because I wasn’t to be trusted, and Pete set his… ;-(

I’d promised the guys bacon sandwiches when we were on the way, with the lovely rye style bread that I’d picked up in M&S.  There is something so very delicious about the smell of bacon across the water, and we had a really yummy breakfast on the move.

The wind was forecast to be lighter than it had been, and the forecast was spot on.  There wasn’t really enough to give us the speed we wanted for our passage, so we motor sailed a great deal of the day. The wind was dead on the stern, so the guys rigged a jibe preventer with the rigging that Pete had set up – it worked very well! 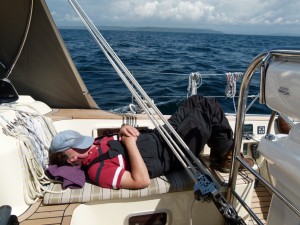 It was a day of engine noise, and sunbathing (in jackets)… Ah, look at the guys… hard day at sea! I believe Tim, later in the day, even deployed his summer sailing cap. 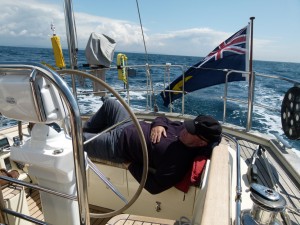 We were debating along the way what our destination should be.  We’d seen a weather warning for a storm a-brewing towards the end of the week, so we were all keen to get ahead of that.  Our friend, “Jonah” Crawford, was due to set off in Nettie for Mallorja so we knew that the weather would be bad – he really charms dreadful weather.  We were deciding whether to pull in before Fowey (like the Yealm), or to make a bid for Fowey.  Even though there wasn’t great sailing wind, it wasn’t raining, and with beautifully clear visibility.  We agreed that we would make Fowey, giving a short hop for the last leg.

We saw three different Navy ships on the water, all heading for Plymouth, presumably.  I wondered if there was a party going on!

I think that Fowey has to be one of the prettiest places to stop, it feels so quaint, with many brightly coloured houses perched on the steep sided hills that frame the water. 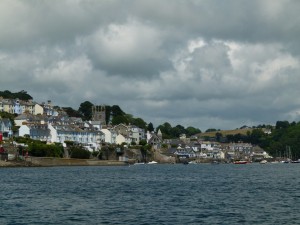 It was surprisingly empty, giving us a whole number of moorings to chose from.  I definitely felt out of practice, and not exactly prepared.  I had to dig out so much crap out of the port lazarette before I could fish out the boat hook – forgetting the magic gadget.  In the end, Tim laid down on the deck and grabbed the mooring buoy, making easy work of the act.  All good.  Then followed a fair amount of pfaffing, as the mooring strop was recovered, deployed, until Pete found the other, longer mooring strop (the right one, and yes, they were both amongst the stuff in the lazarette).  Tim and Pete pumped up the dinghy so that proper deployment of the mooring ropes could be set…. Finally, we were all settled.  We had lunch on board, and decided to foray to Fowey (!).  Pete then realised that he’d left the harness for the outboard in the shed at home, meaning we had nothing to lower the engine off the back of the boat… so Pete bore the penalty, and rowed us ashore.

Summer had arrived in Fowey, and after a little provisioning (at an amazing butchers) we went for a ‘we have arrived’ beer – only it was a delicious jug of Pimms.  Pimms o’clock was well-earned!  We headed back to Whinchat, with Tim rowing us back.  I managed to escape rowing duties – but I think that we’d still be out there now, if I’d been left to it.

We watched a Nijad circling in the waters around us, a 49fter with all sorts of gear on it.  We chatted across the water, and they’d set off from somewhere in the east and were on their way to Ireland.  She’s called Harmonii.  We told them to moor anywhere, which they did without much fuss (from memory).  We would see more of her, and certainly follow her on AIS.

We ate on board, with me making a sausage creation in the Remoska.  Our entertainment of the evening was spent torturing Pete with a kind of “pop master” – having to guess the band/track…. Tim and I were in charge of the music selections, and it was highly entertaining.  We were later to bed than we might have been, particularly as I’d checked the weather forecast, and the gales had advanced… We reckoned we had a weather window of the following morning to get to Mylor.  That meant another 07:00 departure.