Oh dear.  Our early start was nearly even earlier.  I made a fundamental error in setting the alarm, and set it an hour early.  At 03:30 instead of 04:30, that’s quite a material difference.  It wasn’t my best move, and the hour of sleep after the mistake-alarm until the real-alarm wasn’t of the best quality.  We were all up and about and ready to leave at 05:00, bang on schedule.

As we eased out of Portland, we could see a whole flotilla of boats over the outer wall, reassuring in some ways as it meant that we were all after the same tidal window to take us around Portland Bill.  We’d hauled the sails by the time that we’d left Portland Harbour, with the promise of a nice sailing breeze for the day – and hopefully less rain!

The passage around Portland Bill was not what I was expecting, we almost hugged the coastline, and we were the closest in of all our neighbours in the flotilla.  Tim and Pete were slightly incredulous – why wouldn’t you?  Tide is with you, wind is with you, it’s ‘neapy’ and the pilot books tell you it’s OK.  Apparently you should be able to chuck a fender onto the shoreline, or something like that. 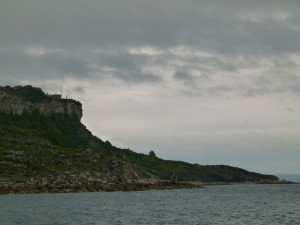 Anyway.  It was very spectacular – the last time I’d sailed that way past it, it was in the dead of night, and I was solo on the helm as my skipper was prostrate suffering from seasickness.  This was a whole order of ‘better’ way of doing it.  We didn’t feel that we were sailing that quickly, as there wasn’t quite enough wind, but we made 8 knots an hour for several hours.  Progress was good – and it was still not raining.  Look, cheery crew! 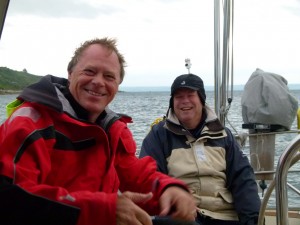 An interesting diversion was HMS Illustrious on manoeuvres.  They were heading out to sea, for some live firing, and were understandably asking for a ten mile exclusion zone.  Pete had a note of the position, but we heard a whole succession of boats calling her up and checking their position – only with not really seeming to understand where they were relative to the destroyer – with the radio operator of HMS Illustrious – who was incredibly professional and patient.  Pete, wondering about our course, double checked the position, and he realised that we were on the edge of his zone.  Having recently become involved in a disciplinary matter at the Yacht Club, Pete was very concerned to be totally compliant, so he had a conversation with the radio operator too – and we were cleared to proceed, with him adding that we were visible on his radar.

The wind started to die off, as forecast, and our speed was dropping, so the guys voted to fly the cruising chute – which I really did not want to do.  I refused to have anything to do with it, as they scuttled around the boat, laying sheets, lines, and huffing and puffing.  It didn’t go entirely smoothly, as a stop knot hadn’t been tied somewhere, so our beautiful kite was flying a bit loose.   They recovered the situation, and we flew with the kite for an hour or so, perhaps more.  I have to admit that it is a thoroughly beautiful sight – it’s an astonishing sail, but it really stresses me out…. It and I have previous, although I have to concede, that in these conditions (the right conditions, please note my skipper) it worked well.  The photo below doesn’t really show how much Pete is beaming at it, but he sat there for ages, just gazing…. 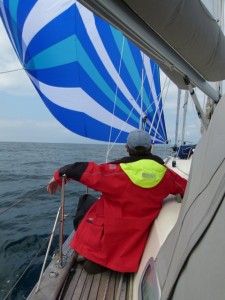 As we approached Dartmouth, a fleet of small sailing boats were heading out, drifting out.  Dartmouth was host to the world J-40 class racing, with teams evident from France, Spain, Ireland – and the UK.  We felt for them, as there was little wind to really give them much of a work out.

I radioed the Harbour Master, who told us that we could go on a walk ashore, alongside the town quay.  We had to tuck right in to the corner…. which meant reversing into the berth.  This was all going well, but the tide was ripping a little more than expected, so there was a slight munch as Pete moored.  Of course, on the only part of the pontoon without a rubber bumper strip!  No real damage on closer inspection – it had caught the wood of the toe rail, and no gelcoat damage.  All good.

We were tied alongside by 01:30, and we were all ravenous.  We headed over to Cafe Fresco (I think), where Tim had been, and had an excellent lunch, washed down with a local beer.  The afternoon was spent mooching around, dodging rain showers and wondering whether to investigate the showers…. we didn’t bother.  In the end, we ended up eating on board, having restocked in M&S.  We had a great evening, drinking too much red wine for a mid-week!  We were all shattered, and early to bed.  Our skipper had checked the passage and the tides, and we had a more leisurely start ahead the following day – 07:00.