So, the ‘will we, won’t we?’ decisions went through different iterations.  We agreed with Tim that he’d report at noon, with several exchanges of messages in the morning.  The winds were behaving, seemingly, but the elements were threatening.  Rain, much rain, was forecast.  In a turn around from the norm, it was me that was most keen to set sail.I really wanted to get some of the miles under our collective belts, and the wind was favourable – and as the weather patterns have been so unsettled, you’re only really as good as the current or the next forecast…. So.  Rain or not, I thought that we should go.  Pete had calculated that more favourable tides would be for a 14:00 departure, which would mean arriving in the evening, but at least it would be daylight!  So, after some deliberations, lunch, we decided that we’d leave.

At 13:45 we were all togged up in full foulies and had slipped our mooring lines.  Pete was the most waterproof of the three of us, having the newest foulies, so Tim and I decided that he would be on the helm when it really chucked it down.  We had the sails up, and the engine off almost as soon as we’d left Yarmouth, and the engine wasn’t deployed until we were approaching Portland.  Incidentally, we’d debated whether to go to Weymouth and raft up, or go to Portland.  We decided that we’d have a nose at the facility for the Olympic Sailing Venue.  We knew that we’d eat on board, a la Remoska, so Weymouth wasn’t going to offer us anything else.

I was on the helm through the Needles, and out across Poole Bay.  It was a cracking sailing wind, with us on a broad reach, a fast point of sail.  The seas surprised me, as it was very bumpy.  I’d’ve thought that there wasn’t enough fetch from the land to create any significant sea.  Well, I was wrong.  Fortunately I have a growing steadiness of sea legs, so I had a brilliant helm, ploughing through an aggressively choppy sea.  I helmed straight for two hours, in the rain, and then handed over to Pete, as I was getting weary.  I’d had a great workout!  Bang on schedule, the heaven’s opened, just about as I’d handed over to Pete, so he was able to test his new Gill gear!

The only incident on the trip across was an error of judgement on my part, sprinkled with a hefty dose of stupidity.  I was sitting in the companionway, sheltering from the rain and trying to warm up a bit.  Pete had forgotten to take his glasses off – when it’s raining, he hates wearing his glasses as he can’t see well enough… He handed them to me so that I could stow them down below.  Here comes the moment.  Whinchat was heeled over, of course, it was windy.  I made the mistake of going down the steps forwards, with his glasses in my hand.  Silly girl.  Should always go down like a ladder.  I also ‘forgot’ that we were heeled over, so I reached for a step that wasn’t there.  The impact?  I fell in a heap at the bottom of the companionway steps, rapidly disappearing from Pete’s view at the helm. I was a bit hurt, as I’d tried to grab the rails on the way down and just bashed my hand.  Ouch.  Pete’s glasses seemed to be OK, but actually, they were bent.  In trying to straighten them later, Pete managed to break the arm off, and crack the lens in two (fancy frameless frames, you see).

As we approached Portland, I went down below (correctly, like a ladder) and started assembling food in the Remoska.  I completely surprised myself, as we were still heeled over, and for the first time EVER, I felt comfortable chopping and cooking at an angle.  Pete was deeply impressed, as was Tim, and more importantly, as was I.

We arrived in Portland completely soggy, and all of us were looking forward to getting out of the rain.  Portland Marina was vast, and the guys on the VHF very helpful.  They were not busy, so there was 10s of metres of pontoon.  Pete chose the most complicated approach, going port-side to inside a visitors pontoon, but he’d misjudged the wind, so we had to go around.  I’m not sure why he had chosen that spot, and the guy who came out to take our lines (never knowingly refuse help, me) was also wondering what we were doing.  Neither Tim nor I wanted to go out in the damp night to investigate the facilities – so we waited for a report from Pete.  Pete had to walk miles to the Marina office, telling us that the facilities were excellent.  It was certainly the best 3G service that any of us had experienced – Tim later found out that this was for the Olympics, and that as soon as it’s all done, the BT engineers, apparently, are going to come back and strip out all the technology… so get it while you can! 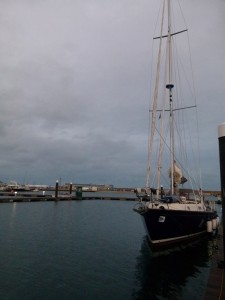 Our meal was soon ready, and it was great to have something warming.  Some summer passage!  We checked the weather, the tides, and determined that we would make a break for Dartmouth on Tuesday – a longer day in prospect, but we had to leave at 05:00 to make the best of the tides.  So, it was early to bed, all of us feeling pleased that we had some decent miles on our side.