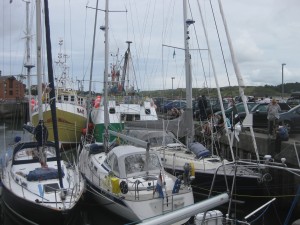 We were always going to spend a day in Padstow… we’d arrived after a long days sailing and the exit to time the tidal gate to Penzance would have been an early start… not what you need!

It wasn’t a day when anything happened very quickly.  We road tested the Padstow showers (not bad, a nice dry floor in the changing area for a change), I updated the blog, we had lunch!  Guess what – stopping in a St Austell brewery pub.  It was really good, crab salad and a pint!  A new ale called ‘Trewlany’ which comes highly recommended by both of us.  We decided that the afternoon would be devoted to mooching.

We had checked the weather forecasts, as obsessively as usual, and had several conversations with different yacht crews as to when the best time was to leave to head south.  The weather was looking OK for Tuesday, but the wind was forecast to be a strong south-westerly – which would just have been a tiresome beat down to Lands End.  Nope.  None of us voted for that passage.  The weather forecast for Wednesday showed a shift in the wind direction to the north, perhaps north east, which would suit us very well.  We all agreed that we’d leave on Wednesday.

Our mooching involved much peering over the harbour wall, and for me, being astonished at how little water there was out there…. 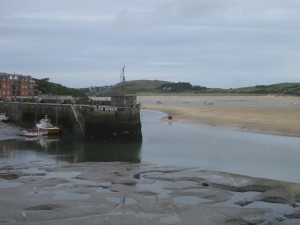 When we’d come in, it had been at high tide, but still!  The photo shows the port buoy (the red object) actually leaning on the sand!  You wouldn’t want to trim that too much!!

We did some retail therapy – not just me!  Pete tried on more gear than I did!  And purchased more clothing!  He is his son’s father, after all!  We decided that Tom would approve of Padstow – Quba, Crew, Musto… Rather than the complete range of tat at the other end.

We had dinner ashore!  Our friend Stowie had recommended ‘Pescadou’, so we opted for that one… and it was really excellent.  Service a little slow to begin with, but that’s because we didn’t follow the required format of a drink in the bar beforehand (we had to make sure we visited a St Austell pub…).  The food was delicious.  All in all a very happy day ashore.

Today we decided that we’d do the Camel Trail – hiring bikes to complete a ‘there and back’ route as far as we could.  I woke at stupid o’clock (04:00) thinking about the orphanage I’d visited in Uganda and some financing ideas… I know!  I gave in at 06:00 and got up.  The weather was decidedly dodgy – really mizzly and generally grim.  I knew that it would clear (being a weather obsessive is useful at times, just needed the warm front to pass through) and that it would be good enough to cycle.

We made our way to the cycle hire place at peak time!  We had to queue for a short while, but were given two fairly decent looking Land Rover trail bikes…  This was impressive, until we sat on them.  Not much gel in the seat!  You kind of knew that bum ache would set in over the miles…

We cycled for about 22 miles in total, mostly pretty flat.  Because about 200 bikes have been hired, some parts of the trail were crowded.  Lots of families, so we were doing a lot of overtaking.  The views were lovely – the Camel Estuary at low tide, so we saw loads of wading birds picking at the banks.  Favourite spots – a curlew, our old friends the oystercatchers and a grey heron swooping low over the water. 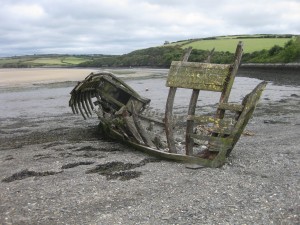 Pete spotted a wreck on shore – a little boy next to me claimed it was ‘definitely a pirate ship’… Bless!

The cycle path from Padstow is in different parts.  The first part to Wadebridge, about 5 miles, which is where most families seemed to stop.  Beyond Wadebridge, the path climbed gradually, with Bodmin being the next mark… we nearly got there, but stopped at a pub for lunch just before.  Beyond Bodmin, the path steepens, apparently.

On the return we made a detour to Camel Valley Winery…  Up a very steep hill!  Totally ridiculous!  Pete had to make a phone call, and found something convenient to lean on… 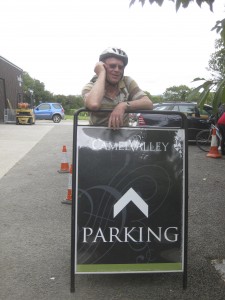 He was saluting the efforts of the Tour de France guys, who do many more miles than we did…

The only thing with the trail bikes is that they had no mud guards…  Which meant that both of us were completely splattered in mud!  The rain overnight had made the path sticky in places… So much so that we’ve just shoved all the clothes we were wearing in to the laundry! 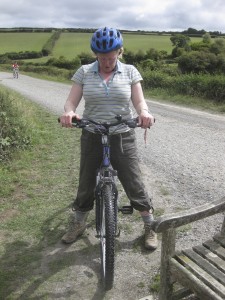 I’m checking for mud splashes… I don’t like getting muddy!

We’ve consulted the weather, again, and the forecast is constantly shifting.  The strong winds have been downgraded, phew, but the concern now is ‘will there be enough wind’?  It’s something that’s very hard to predict.  We have another long day, and it would be nice for the elements not to conspire to make it any longer….