03:45 came around all too quickly, but fortunately those six hours of sleep were good ones…  For breakfast, we dosed up with stugeron, ‘just in case’, which was a very good move…

Leaving the anchorage was easier in dark than exiting the marina in Holyhead, with just the anchor windlass to operate… When I pulled up the anchor it was caked in thick black mud, but it was all to dark and complicated to consider doing that in the dark.  I had duties to spot for lobster pot buoys with the big search light.

As we were heading out of the anchorage, we were very happy to see that a massive tanker being escorted by four tugs was inbound, and had cleared the channel that we needed to pass out of.  Meeting a monster tanker was one of the potential stresses, and we’d just missed it.  We also knew that as all four tugs were being used, there was no danger of another peering out of the night.

Exiting the channel was easy enough.  The visibility was really good, and the sea not so bad so that the lights marking the channel (and the odd obstacle) weren’t disappearing in the swell of the sea.  We had about 6 miles to make before we got to open water, and the point that we’d raise the sails.

The wind, as forecast, was set to be very favourable to take us south.  With the direction due from the west, or north-west, it would mean that the wind would be on the beam, or just behind it, making a very fast point of sail… one that shouldn’t tip too much either.  We’d hauled the sails about 5:30, without any fuss or incidents, just as the light in the sky was from the sun, switching shifts with the moon.  I was on the helm as we raised the sails, so therefore I was on the helm for my first shift… in an act to wake up a bit, I didn’t hand over to Doris!

Almost as soon as we had raised the sails and killed the engine, we were treated to our first interaction with dolphins.  I saw something dart through the water out of the corner of my eye, but couldn’t quite make it out.  A couple of moments later, I let out the inevitable long cry of “doooooolllllllphiiiiiiiiinnnnnsssss”!  Wonderful.  We think only four or five, but they swam alongside and around us for a short while.  The water was really clear, so you could see them torpedo under the surface and gauge when they were due to pierce the surface, and then dive back down below.  It was great, really wonderful – but not so good for my helming.. the excitement meant that my ability to hold the course to steer wasn’t great!

Mum… skip to the bottom… but take in any photos.

The sea was of the vilest roly-poly kind.  In sea area Lundy, with the wind from the west, we were exposed to the rhythmic swell of the Atlantic.  And unlike the Atlantic, which has several hundred feet of depth, the waters here were relatively shallow, about 60-80 feet, so the waves pile up a bit more.  The seas weren’t that big, perhaps a one-two metres (with some whoppers that you could see looming and running towards you from the horizon), but the frequency ran at about 5-10 seconds, so we were being put through a cycle of up-dooooown-up every 5-10 seconds.  To old salty sea dog skipper (aka Pete) this was no trouble, but to me, well it was all rather wearing.  The wind direction meant that the waves were coming from the side, so we were kind of sailing across them, again, making it feel more roly-poly.  No bother to Whinchat, so it wasn’t hairy, or even scary, just a relentless motion… for the best part of 12 hours.  You try and tell me that’s not tiring!  I couldn’t stay in the saloon for any length of time (just about to pee!), so Pete was the one making all the snacks and cups of cuppasoup.

We operated a watch system, one hour on and one hour off.  For the hour on watch, both of us let Doris do the helming, with us just being on ‘watch’… on the look out for other boats in the water, checking that she’s on course, and for me, looking out for more dolphins.  One the ‘off watch’ hour, then I used the time to sleep – or at least doze.  Anything to try and alleviate the feeling of the sea for an hour… I managed many dozes during the day.  I was just about to head for a catnap at 09:00 when a bunch of dolphins showed up – many of them – around 20 – and stayed with us until 09:25… eating into my dozing time!  I didn’t mind!  It’s really hard to describe the utter joy they bring… you’re constantly scouring the sea to see where they’re going to pop up, and in that time, I didn’t notice the motion of the sea at all.  Pete suggested that we take some photos, so he went to the bow to snap-snap (partly as I’d failed so spectacularly before to capture a single shot, and partly as it was way too bouncy).  Pete was far more successful! 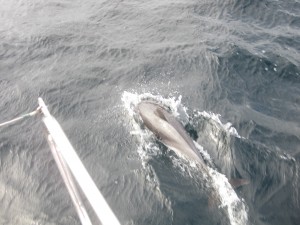 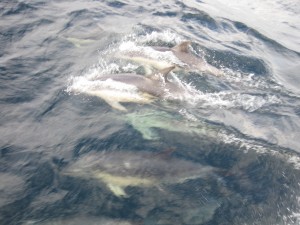 Throughout the day we were treated to four different ‘dolphin displays’, but the 09:00 group were the most spectacular…

The plan in getting up before dawn was to make the tidal gate into Padstow, with a brief anchor stop in the bay around the corner if needed.  It was a day where we made cracking progress, given the wind, so we arrived early!  We dropped the sails and approached the anchorage, only to find that it was full of lobster pot buoys.  GROAN!  Pete then basically drove Whinchat in and around the bay as I made some lunch and we waited out the hour that we needed to clear the gates.  I commented that it was like waiting to get into Heathrow, a kind of holding pattern… only not over Kent or Berkshire, but in this tiny bay off the northern coast of Cornwall.

We motored around into Padstow, this time with the sea and wind against us, so we ploughed through the sea.  Pete seemed surprised quite how much sea there was – it wasn’t to me!

The approach into Padstow has its own challenges, there is the “Doom Bar” to get across,  but fortunately it is well marked by channel markers.  We couldn’t raise the harbour master on VHF so I called him up, and gave us clear instruction to tuck in alongside the quay wall, the one with the car park!  Well.  This was a new experience… I had no idea if I needed to leap, which line to secure first, or where the fenders should be…  And all very typically, it was a lovely sunny afternoon in Padstow so the harbour was full of tourists – eating ice creams, drinking beer, and watching the world go by… or at least yachts trying to moor up.  I mused to mum today it was role-reversal in Fiskardo.  It can be great sport.

Fortunately, we managed OK.  Pete was slightly stressy – the fenders were too low, and the tidal range meant that the lines had to be quite long.  It seemed to take a while to settle.  In the process “Cavalier” arrived to raft next to us.  We’d sailed behind them from Peel to Holyhead, and again as we went down to Fishguard.  Funny that we’d end up next to each other after a gap of a week or so!

We were able to go ashore and have a ‘proper‘ “we have arrived” beer… of course in a St Austell Brewery pub… We liked the first one so much, we took a second.  What a long day!  But how good does it feel to be back in England?  It’s really amazing.

We ate on board, and I totally conked out about 20:30, heading for bed. I‘m not sure that anything very much would have disturbed my sleep, but all the same, it’s great being securely tied up in a harbour, particularly when you know there’s another depression a-brewing out west…