Monday saw the arrival of Tom and Emma, joining us for a few days sailing.  Tom is an old hand on the sea, but this would be Emma’s first go at sailing.  Tom had joked that as they’d bought Emma a full set of foulies, that this would mean that the weather would mean sunshine… what he really meant that Emma would have no use from them as the weather would be too vile to set sail!

We never planned to leave on Monday, so had a very moochy day.  Lunch out, and I got a pedicure!  Oh the luxury!  We had big plans for Tuesday, and were looking at heading towards Tenby, Swansea…. perhaps an anchorage off a little island.  That was before Autumn arrived early!

We were going to leave around noon, to make the free-flow out of the marina, but when we checked the forecast, it was not good.  The ridge of high pressure was to give way to a whole series of Atlantic lows – Pete made the comment that he wouldn’t set sail on that forecast if it were just the two of us, so with a novice crew member, he really didn’t want to stress, scare or make her seasick on her maiden voyage!  So, new plans were made.

Tom and Emma had driven down, so at least we had his car to take us places!  We decided that we’d go to Pembroke Castle and then head for the coast.  The castle was good – interesting in that it was home to Henry Tudor, whom I’ve been reading about in The Red Queen…. so I had a little bit of context.  We had a guide book, so Pete was nominated “Red Coat” for the tour of the castle.

An indifferent lunch was followed by a drive to the coast and a lovely wander over the cliff tops.  Pete was really disheartened when we got there as the forecast wind hadn’t arrived, it was gloriously sunny and the sea was flat calm… perfect sailing conditions!  We wouldn’t have watched the baby seal on the beach suckling it’s mum, and then crying as she headed off into the water…. 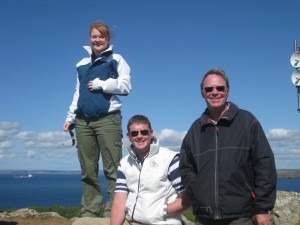 Enjoying the sunshine, if a little breezy! 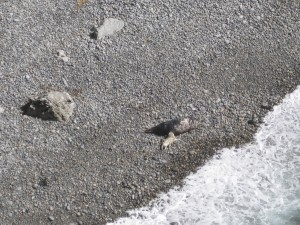 Baby seal, small white ‘shape’ near the breaking wave with mum (not a rock as we first thought)

There was only one thing to do when we got back – Pimms O’Clock!  Taken in the warm sunshine in the boat’s tent.  A very civilised day! 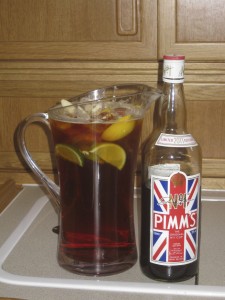 Wednesday brought an even more grim weather report, with winds blowing around the marina.  Gale warnings in the sea and the coastal area north of us… All to be taken seriously, although Pete was wavering given the inaccuaracies of the day before.

We decided to heed the weather warnings and make a day trip to Newport.  Pete had found a guide with a good pub and a good walk… a good combination!  The pub was excellent – The Golden Lion in Newport if you’re ever there – good service, great food served promptly… such a contrast to the place in Pembroke!

The walk was great – except for the blister that poor Emma suffered – a two hour stride out from sea level to the high hills behind Newport, taking in estuary, woodland and ‘mountain’ (as described in the guide).  Unlike Tuesday, it really was blowy, very gusty on the hills and when we got back down to sea level, there were ‘white horses’ charging over the sea’s surface.  It wasn’t the day that we might have hoped for, but it was good enough! 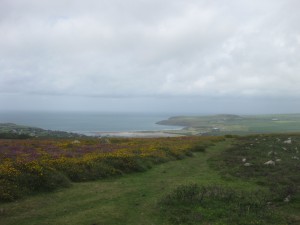 View from the ‘mountain’

The weather was just about good enough to try sailing, and after all, that’s what Whinchat’s latest addition to the crew had set off with the intention of doing!

We had to wait for a lock to get out (aside:  I am so glad, with hindsight that we didn’t go for Chichester as our home port, even though it’s probably closer, as the restrictions on when you can and cannot leave are frustrating)!  We had some lunch on board, and then set out, just with the intention of sailing out into the bay, and then back into Milford Marina.  The lock was much easier than anything on the Crinan Canal!  No easing of lines.  The difference is that there’s a  floating pontoon that you tie up to, which effectively does all the adjustments for the tide for you.  It’s also an enormous lock, so the surges of the water within are barely noticeable.

Anyway… We are all in our foulies, as it’s not great weather, and the wind is blowing a Force 3-4.  Not a  bad wind.  Emma is given the job of driving us down the channel, which she does admirably!  She didn’t look that convinced about it, but either Pete or Tom was standing near her.  It takes a surprising amount of concentration when you first drive, and Emma declared that it was “much harder than a car!” 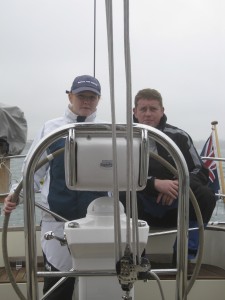 Emma drives (not quite sure why Tom is frowning!)

We hauled the sails, and the first point of sailing was guess what?  Into the wind!  So Whinchat heeled quite a bit!  We had the full mainsail out, but only the staysail as the front sail – there was a fair amount of wind.  Pete invited Emma to helm, but she declined…

We sailed out towards the bay, but it wasn’t great… The sea was a bit lumpy, it was trying it’s hardest to rain and the industrial landscape of Milford Channel isn’t that inspiring.  All in all, not a brilliant introduction to sailing!  We decided (Emma and I) that it was time to turn around and head in.  This time the wind was behind us, so Whinchat wasn’t being tipped to one side by the wind, but she sat firmly in the water.  You’re also not driving into the sea, so the feeling of the water is much more gentle.  Tom was on the helm, Emma still not wanting to.  We gibed up the river to the toll bridge,  Emma being given the job of winch wench!

We were out on the water for a few hours, but had to time our arrival back in Milford for another lock…. we arrived on time, but there was some delay, so we had to wait on the waiting pontoon before we could get back in.  Frustrating!

I’m not sure that it was a wholly successful introduction.  I think Tom should have followed in the footsteps of his dad – Pete took me to the Greek Islands for my introduction to sailing… I commend that to Tom!  Perhaps that’s an idea for a trip next summer?!

Saundersfoot and then Tenby

The weather had not improved, and so I reckoned that we shouldn’t put Emma off any more than she might have done.  Tom and I consulted over the weather and deemed the ‘drizzle and fog patches’ as a good reason to have another shore day.  Pete found a ‘good pub guide’ pub in Saundersfoot, so that was the declared destination.  I think he’d been resistant to going here earlier in the week (despite a good recommendation from Karen about the lobster in Tenby) as he really wanted to sail there.  We’d basically run out of potential days, so here we could go.

The pub at Saundersfoot was OK – the food was OK (the ladies loos were not a patch on the pub in Newport), but the town was a bit gloomy somehow.  We walked around to the harbour to see where we might of moored.  It’s a drying out harbour – which means the water totally disappears out to sea at low tide, which in turn means that your boat ‘leans’ against the harbour wall… I knew this might be a possibility, but having seen the harbour ‘dry’ I cannot imagine that Pete would be happy with it at all.  He’d never set foot off Whinchat all the time that we’re there! 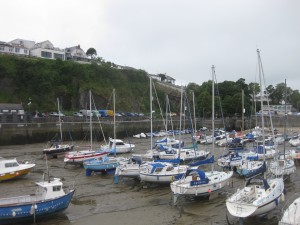 From Saundersfoot we drove the short distance to Tenby… What a lovely little town!  Lunch looked like it would have been a better prospect than the pub (as Karen had said).  We mooched around and the guys had ice cream.

For the last night on board, we had champagne!  How delicious was this! The last of a ramoska meal for Tom and Emma (Emma is another convert, and asked me to write a food blog on the meals created… I’ll think about that one, Emma!!).  It was a lovely end to their days with us on board.  Not perhaps the sailing adventures that were planned, but a good few days all the same.