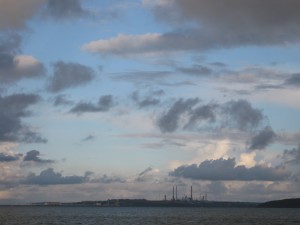 Photo shows Milford oil refinery, on the way to the marina…

It was another horrible sleep for me.  For some reason (as the pilot book warns) there is a swell in the bay.  Pete told me “it’s not that bad”.  That’s as may be, but it was hard work for me.  After some long hours at sea after a bout of feeling seasick I just think I’m at saturation point for the feeling of constantly moving.

I had to move bunk in the night.  The fore peak was too bouncy for me, so I shifted to the ‘couch’ in the saloon, which in theory is more solid.  I think it worked, as I went back to sleep.  I woke feeling all discombobulated, again.  I felt that I just wanted to be still.

We could set off at 10:15 so that we could make the lock ‘free flow’ in the marina.  At least it wasn’t at the back end of the day… I think it would have sent me loopy!  We sailed out of the bay, until the wind wasn’t giving us great speed.  We were blessed again by there being no tankers being moved around, so the hazards were few.

Milford Marina staff are so helpful, so friendly.  We were able to refuel, with Pete on the nozzle, so we were able to control the flow and minimise the overflow flooding (we must have a dodgy valve, as we keep on getting diesel on the deck from the overflow; it’s not pleasant).  We were allocated F01, which was a little more effort than it needed to be… due to poor signage by the marina!  It’s really hard to describe in words, but we tied up where we thought F01 was – in between the F and G finger pontoons – alongside the backbone of the pontoon.  F01 clearly marked, however, there would be no chance for the guy in G01 to get out.

We moored to a complete audience, people peering over the side to watch us ease in.  I did a monumental leap onto the pontoon to take the bow line, as I heard a little boy saying “why does that lady have to jump?”

I shouted up, “it’s to tie us on, and it takes a massive amount of bravery on my part”… his granny laughed.  We tied up, in this mad space, and Pete went to check.  He came back saying it was all good.  About 20 minutes later, a marina guy leaned over and said, “you’ve got that wrong”, so after walking Whinchat back into the ‘non-berth’ we had to walk her forwards to the correct berth… actually F02 on their signage, but hey, whatever!

It is so very lovely to be still.  There’s little wind in here, and with warps secured at all ends, very little chance that we will move much at all.  It’s just the ticket…