I slept for 11 hours, and emerged from my cocoon of sleep like a new woman.  All the misery of the day before restored, although I still had some of the ‘scars’ of the rough ride, and was certainly feeling anxious about another longish day – although Pete had promised it would be much shorter!

The passage to Milford Haven took Pete some time in the planning, consulting various sources.  There are a couple of tricky navigation passages which the books say to pass around slack tide.  So, with a complex set of equations solved, our scheduled departure was at 11:00.  We weighed anchor, this time with it coming up the right way.  Pete has been swapping messages with Tim and his trick is to go astern as the anchor is beneath the surface… guess what?  It worked!  This was very pleasing.

The wind was pretty good, so we basically sailed out of the bay, which felt pretty good.  We had a good sailing wind, and completely flat seas.  Just what I needed!  It was a good start.  However, we had to change course and the wind was then bang on the nose, and not really strong enough to sail with any speed.  We were making terrible progress – the foul tide was much stronger than Pete had reckoned on, so his calculations were rendered useless.  We would miss the ‘slack water’ gate needed to pass through two islands, meaning that we’d have to sail around them… this was adding time and frustration to Pete.  He was really fed up, and couldn’t really make sense of it.  Had we have known, we could have left two hours previously and made the tidal gate.

Progress was also so slow under sail, that he put the engine on… adding to his misery!  As he recorded in his log “several hours of plugging tide ahead of us”.  And then it started to rain!  Not a happy day at sea.

As we approached Ramsey Island, the wind picked up a bit, and because the passage took us over some stronger tide, the sea got a bit bumpy.  Nothing too mad, as the tide was with us, but it was good to see a sensible rate of progress being shown on the chart plotter screen!

The wind was sufficiently favourable to begin sailing again, so we hauled our sails and had a cracking last few hours under the elements as they should be for sailing.  A good wind, and ideally, a kind tide.

I was on the helm when we rounded the second island.  What Pete hadn’t told me was that this passage involved riding over some overfalls.  Well, I didn’t know what they were before this point, and I honestly don’t want to meet them too often.  An overfall occurs due to the topography of the sea bed, creating kind of waterfalls in the tide.  We had wind over the tide too, so suddenly, we hit this very rough and wild patch of sea.  I was on the wheel, steering and bending with all of my strength as we careered down waves, getting bumped about a bit.  It was a scary moment, and I asked something of Pete that I haven’t done in ages.  I asked him to come and stand by me, as I wasn’t convinced that I had the strength to direct us where we should be going.  As it was, I was off course, unable to point Whinchat exactly where we needed to be, but it didn’t actually matter (no hazards).  I guess this must have lasted for about half a mile… not long, thankfully.  When we were spat out the other end of it, I looked back and you could see this torrid sea, churning up.  I made a mental note to avoid them in the future… and to think that this was the preferred option to the missed tidal gate!  *shudders*

Pete took over on the helm for the last part of our journey… we had only super tankers to look out for!  Fortunately, the ones that were about were at anchor waiting for the tugs to take them into port.  There was little traffic to look out for.

We decided that we would head for Dale Bay, and either take a space on the floating pontoon or anchor.  In the end we opted for anchor, we have every confidence now in the Roca.  There was lots of space, and the anchor set solidly on the first go.  Despite it being a ‘shorter’ day, we were still at sea for eight hours, two more than Pete had reckoned on.  5.25 average is not that great.

We were treated to a spectacular series of ‘cloudscapes’; the light and colours was amazing.  I took loads of photos, and have chosen a couple here.  You’d think they were airbrushed… nope.  All nature in her glory. 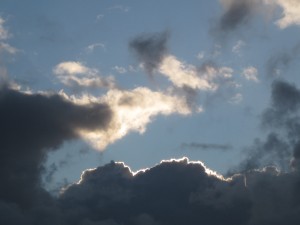 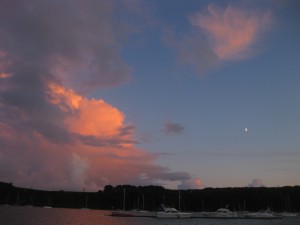 Cloudscape with a half moon visible to the right 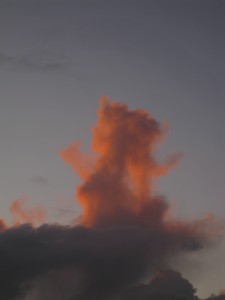 We saw a ‘teddy bear’