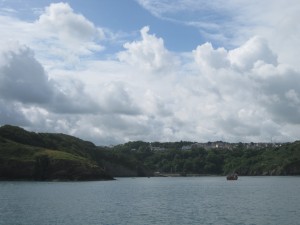 SW 4-5 initially, then dying off to a breath of wind.  Very rough seas initially, through moderate and then slight…

If Wednesday’s passage was endurance, then today’s, for me, was misery! Mum, just skip to the bottom and know that we got where we were scheduled to..

It was a very early start with an alarm call at 03:45, but I’d woken long before the alarm went off.  The wind had shifted in the night (as forecast) through to the north, and was blowing us head on on the pontoon, so that the mooring lines on the bow were snatching and pulling.  We were being jolted from side to side.  Not a comfortable night, and not an ideal start to a long passage.

Exiting a marina in strong wind is always a challenge, but add the cover of darkness into the mix and it becomes pretty tricky.  I’d remembered the red-light head torch, which I wore, so at least I could see the warps and fenders (and where I was putting my feet) without destroying my night vision.  We slipped out of the beth OK, but the wind wouldn’t let Pete steer Whinchat out in reverse; it was pinning our stern, which meant that Pete had to do a gazillion point turn in the marina.  All pretty stressful.  We exited from the marina, again with me on the bow with the mega search-light torch spotting the obstacles in the mooring field.  All successfully negotiated.

With hindsight, we both should have paid heed to Pete’s observation and comment, “it might be rough out there, there’s spray coming over the wall”…  I’d checked the marine weather on my phone, and there was certainly nothing heavy forecast.  “We’ll be fine”, I said.

We rounded the harbour wall (incidentally, the longest in Europe) and were faced by a wall of sea.  Rolling waves, flowing rapidly in succession. From the absolute calm of the harbour, we were pounding into a very heavy sea.  Waves of 3-4 metres, firing at us so quickly.  Pete said, “well this wasn’t in the forecast.”

I thought it was just the sea, blown up by the wind, piling up against the sea wall, and that therefore it would ease as we headed for deeper water.  It didn’t abate that quickly.  Now, I think it was wind over tide, which is a hell of a scary thought.  The tide was pulling the main body of the sea towards open water, but the wind was blowing the surface of the water the other way, giving these short, steep waves.  We were absolutely stunned.  As Pete later commented, there was no chance of turning back.  Once we had committed, we had to keep going.  Even through these heavy seas, we were travelling at a speed over the ground of 10+ knots.  We weathered into this sea for about 45 minutes, and then it gradually eased.  Still fairly roly, but no longer this complete fairground ride.

I had looked at Pete at one point, and saw that he was beyond stressed – a gritty look of pure terror.  We were closer to rocks than he would have liked, and was helpless to steer any other course.  It was just awful.

Rather unbelievably, neither of us felt anything close to seasickness, although I think it was arguably the roughest sea we’d been in.  There was almost no time to acknowledge it.

When we’d come out of the worst of the sea, we thought we should try and sail.  It was a good sailing wind!  Pete had gone down below to sort the carnage in the cabin (things were flung all over, despite us always clearing things away before we set sail), and had emerged with the contents of his stomach sitting high in his throat.  The motion of the boat was not pleasant, and it had gone straight to the queasy feeling… I made him sit back on the helm, and we didn’t raise any sails until he was feeling OK.  When he’d recovered, he ground up the main, with the effect of exertion making him feel queasy all over.  Therefore, it was only fair that I launched and winched in the yankee…. which had much the same impact on me.  Instant vileness! My insides were churning, so I just sprawled in the cockpit, trying to draw cold air deep into my lungs.  I was also feeling sleepy.  It was sometime around 06:00.

Pete sent me down below to sleep.  Usually this is the very best cure to ward off feelings of seasickness.  We have a pilot berth, on starboard side, which you can wedge into and generally feel safe.  I tried to settle into the berth, but because we were on a starboard tack, the berth was on the ‘up’ side.  I felt like I was lying in a coffin, straight out, when all I wanted to do was curl up in a ball.  The feeling, well all I can think to describe it as is like when you’re being driven in a car and you hit a hump in the road too fast – your stomach lurches and lifts.  This was like this, hump after hump, wave after wave… continuously for a couple of hours.  It was no rest; no chance for sleep. I knew that getting up would make it worse, but I really needed the loo.  Oh, that was such a bad move to be vertical.  I kept my eyes tight shut all the time, but the violent churning of my stomach was so grim.

I went up on deck, to try and get some fresh air.  This initially gave me some relief, but it was very short lived.  I felt wretched, miserable.  I sobbed and sobbed.  The awfulness of being vertical was dominating.  The churning ‘heat’ that you feel in your stomach, bile turning over and over trying to make its way out.  The point is crossed where you are afraid of being violently sick, to one where you are willing it to pass so that you can be rid of this toxic, heavy, hot feeling in the pit of your stomach.  I lean forward, moving towards the side of the boat, aware that Pete has grabbed me by the strap on my foulies.  I wait for the relief of being sick, but the wave of nausea passes.  I sit back up, making all manner of groaning and moaning noises.  Another wave of nausea is building pace and force , so I throw myself forwards over the side of the boat.  I am staring down at the sea.  Again, nothing.  No relief.  I collapse back into the cockpit, curled over on my haunches.  I can feel myself drifting into sleep, and this feels like a joyful escape.  It is such a relief.  I pass out, curled up in a ball in the cockpit as my exhausted body shuts down.

I wake an hour later, knowing that I have passed the worst.  I am pretty certain that the biliousness will not come back.  The sea is calmer.  The wind is dropping.  What I’m left with is a debilitated feeling, of being totally washed out.  I just want to be still, but there is still a constant rolling of the swell of the sea.  A day ago this sea wouldn’t have troubled me, but today it feels tortuous.  I wish to be anywhere else, but there is still another 40+ miles to go.  Pete makes me eat something, so I get a sugar lift.  It is restoring, enough for me to be on watch as Pete goes to get some rest.

The day passes in a blur of watch and rest.  For every two hours, I need an hours sleep.  Within the first hour of my watch, the wind dies, and so we have to motor sail.  The sun is shining.  We have a great spot on the back of the boat, Tom’s spot, where you can lie flat out, head on a rolled blanket, cap shielding you from the sun and doze.  It is pure escape.  I was quite surprised to see the photographic evidence on the camera…. 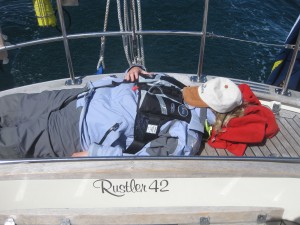 To add to the length of the day, we received a VHF call from Aberforth Marine Control… They were coordinating a live firing exercise, bang where we wanted to sail our course to.  We were asked to make a diversion to give a 10 mile radius of a particular coordinate, which of course we did!  The change in course added an hour to the day – not exactly great – but I think Pete enjoyed the little drama that it added. They were extremely appreciative of our cooperation, which is something!

We reached our destination at 18:30, so it had been 14 hours on the water.  We were both shattered, and very happy to see that there was plenty of room in the anchorage.  We anchored off Lower Harbour, made some supper and I’d crashed out by 20:30.  Pretty much dead to the world.