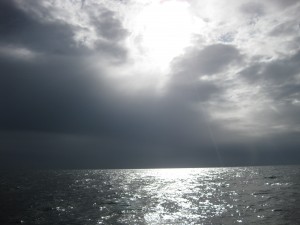 S or SW 4, slight then moderate then slight seas, fair and then wet and yucky!

Our passage to Holyhead, for me, was mostly one of endurance.  It was frustrating at the outset for me – knowing that we could only leave after several hours of daylight have passed, meaning for certain a night arrival.  We had calculated that the passage should take 50 NM, with a cautious estimate of 22:00 arrival in Holyhead.  That was without the wind and tides to conspire against us!

We left Peel just about as soon as the swing bridge was opened, along with a few other boats.  One of them was “Stryker” our neighbour, who was heading home towards Conway.   The route that Pete had plotted for us took us close in to the coast of the Isle, to give us maximum opportunity for spotting basking sharks.  For about 90 minutes I scoured the waters to no avail.  I think that was our best chance of seeing them – the skipper of Stryker had seen them from the coastal path, so we knew they were around.  Not to be!  Stryker took a course between the southern point of the isle and Calf Island, passing through a little sound.  We took the off-shore route, around Chicken Island.  I reckon it cost us an hour of the 12 hour journey.  The wind was doing as forecast, coming largely from the south, of course the way we wanted to head…. We were motoring, but our progress was really slow, particularly when we hit what must have been a merging of tidal streams.  The sea piled up into short, steep waves, more lumpy than choppy… and we just crashed through them, each wave seeming to slow us up.  It wasn’t that I felt queasy, it was just uncomfortable.  One of those moments when you just think “what am I doing here?”  I don’t do fairground rides for kicks, so why am I content to be put through the equivalent of a washing machine spin cycle? (at least it wasn’t wet – that would have been a rinse!!)…

We could see Stryker in the distance, and the navigational choices then just feel depressing.  We thought we might do better with the sails up, so we motor sailed, which did punch us through the waves at a better rate.  Believe me, that extra knot or so is a big morale booster!

So, you’re feeling all messed up internally, not quite whole.  We were taking it in turns on watch, and I was on the helm supervising Doris… when I let out what can only be described as a complete ‘squeak’, as I saw a dolphin torpedo along side us, about 5m off the port side.  “Dolphinnnnnnnsssssss”!  It’s very quick to lose the feeling of endurance, as a moment of pure joy surrounds.  I’m not sure how many came to play, perhaps five or six, but they we careering around.  We were sailing into the rolling waves, and I could not believe it when we watched a dolphin seemingly body surfing down the surf.  Remarkable.  They didn’t stay with us for very long, perhaps 5-10 minutes, but they really lifted my spirits.

It was my watch when the storm that was approaching (as shown in the photo above) was looming large.  Full foulies deployed!  Pete was just musing whether to raise more sail (the yankee instead of the staysail), but I was the voice of caution – who knew what squalls would come with the rain.  It turned out I was right, and we were able to sail for a while… it was just about manageable to hold the course, and I have to say it was much better sailing than motoring.  My skipper had all but abandoned the course that he’d originally set – the direction of the wind wouldn’t let us hold that one – so we were sailing as close as we could to it.  I got pretty wet, but at least the hour on the helm passed with me feeling like I’d done something (even if my helming wasn’t brilliant).

Of course, my ‘reputation’ as the wind finder was only reinforced.  When it came to Pete’s helm, the wind died off.  To be fair, so did the rain!  We had a difficult moment when I looked at the speed we were travelling, four knots, and at 23 miles still to go, we were looking at another six hours on the water.  Pete, reluctantly, put on the engine.

We had an interesting conversation about sailing over the afternoon and into the evening.  Pete said (when we got into harbour) that he would have sailed all day… “it’s a sailing boat” he said, despite the fact that it would have taken some 12-14 hours to achieve the passage.  For me, for a trip of any length which involves night sailing, then it’s ‘get me there as quickly as possible’.  I don’t enjoy it – I endure it.  This led to a whole discussion about tolerance, but that’s another story!  I get that you have to do the passages to get to other places – we wouldn’t have had some of the amazing times over the summer had we not slogged up the Irish Sea.  It’s endurance, for me.

Particularly at night, I find the whole impact on my body really unsettling.  The motion of being at sea is cumulative, to the extent that you get ‘sea legs’ when you right yourself on land.  Your brain is still desperately trying to accommodate for the fact that you’re constantly in a rolling motion.  When the sea is lively, as it was for much of yesterday, then it’s worse.  Bring on the night, when you can’t see the horizon, and you have no point of reference.  The strain is somehow worse, for me.  I hate the fact that it leaves me completely discombobulated.  It is 12 hours since we moored up, and I still feel very much ‘out of body’, like all the bits of me don’t fit, and that my head is swimming in a slight mist.  I’m not in my body… It’s hard to find the words when you’re brain’s gone missing!

Anyway.  Back to the voyage.  As darkness fell, we were making our way across the shipping separation scheme towards Holyhead.  We could see the lights of the town on the horizon.  We had a new (or repeated) issue for us to deal with.  Pete had heated up the bolognese sauce and made pasta, so we at least had hot food in our tummies!  He was back on the helm, and as the light was fading, we needed our sailing lights.  Only they kept on failing (as had happened when we came into Howth).  In the space of an hour I must have reset them 20 times… having to come into the cabin and press a sequence of buttons and reset the fuses (all adding to the washing machine effect, I guess).  Very tedious.  In the end, we (illegally) set the sailing lights (not the motoring lights).  But then the wind came back, so we were able to sail again.  I guess this must have been somewhere between 21:00 – 22:00.  For a while, this cheered my skipper.

For a while – that was until he saw the progress we were making over the ground.  The tide was stealing 4-5 knots from us, and he couldn’t understand it.  The Almanac had made no mention of it (the Pilot book did, when we checked this morning).  I think this was his low point, particularly as it had started raining heavily again, and the lights that we could see disappeared in the mucky night.  We were heading for a lighthouse (as a point to steer to, not literally), in search of a cardinal marker to steer around (9 flash sequence on the lights).  It took us ages to spot it, and we were creeping towards it about 2-3 knots.  I’m sure he was carrying some ‘guilt’ for ‘making me’ endure the passage, and there was no telling him that we had to enjoy the same things.  I really think he’s worried that I will hang up my sailing boots when we get back to Falmouth…  I won’t.

Anyway.  We are plugging away into this foul tide, with the elements chucking everything against us – at least the wind wasn’t too strong!  We turned to round the cardinal, into the wind (again) so we had to motor the last few miles of the journey.  The last couple of hours actually passed pretty quickly…. you have to be alert to the lights that are there to guide you, as well as be vigilant for other boats out on the water.  Fortunately there was no one else as insane as us out on such a foul night!  From the 9-flashes of the cardinal, we were heading towards the green light of the harbour wall….  Which we crept towards very slowly.

It was a good feeling to get inside the harbour wall, but we still had to drop the main, which I was anxious about.  We need a fair amount of space, and I would have preferred less wind.  Pete said that there would be loads of space inside the wall – which there was… and the breakwater made a massive difference on the tidal stream.  It was one of the smoothest ‘drops’ we’d made.  There was some kind of pier, or terminal (who knows in the dark) which acted as a massive wind break, so I was able to point Whinchat into the wind so that Pete could drop the sail, and then I was able to stop her dead and hold her (not always one of my strengths), giving Pete time to go up to the boom and fold in the sails and secure them.  All very satisfying.

From here we had to make our way to the marina.  I insisted we use this calm place for me to get the fenders and warps out… one less thing to do in the final moments of mooring.  Pete had phoned ahead and made a reservation, and was told to radio in.  The most charming lad was the nightwatchman, who was brilliant.  He was expecting us, told us where to go – and then had to call us back as we’re longer than the 10m pontoons.  We were to get to F-pontoon.

We had to get to the marina entrance first… without being able to see very much at all.  Pete said that we were approaching a mooring field, full of boats on swinging moorings… I couldn’t see this at all.   I went to get the million candle searchlight, so that I could stand on the bow and sweep the water in front of us so that Pete could weave our way to the marina entrance.  It worked well, except that it took my fender/warp tying time.

When I looked up, we were in the marina, but had found our way to E and not F… but the nightwatchman was very forgiving, and he helped us in.  Again, quite tricky in the total dark.  I couldn’t see the cleats on the dock, so seeing what I was securing was a challenge.  It probably wasn’t our finer mooring, but given the time of day I think it wasn’t so shabby.

We arrived at 12:30 on Thursday.  As Pete recorded in the ship’s log.  It was rather more of a mammoth trip than either of us had hoped for. 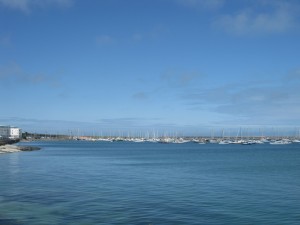 Needless to say, we had a day ashore today.  Well, if you can call doing laundry a day of rest and joy!  We walked into Holyhead, walked around, and headed back to the marina.  There is nothing much to celebrate in Holyhead.  You have to feel for the Duchess of Cambridge!

Pete has calculated the tidal times, and the best time for us to leave port for Fishguard is 04:00… a very early start and a very long day in prospect.  Let’s hope it’s a good rest this evening.