SE 1-2 , with slight seas (except the exit from the lough) and fog!

The forecast had significantly improved – so no chance of turning back over to sleep on this day of sailing.  The only trouble was that it was forecast to be a ‘no wind’ day, so neither of us really expected to be able to sail.

We exited the berth with no drama – having seen a couple of yachts take off the previous day and get scooted around by the tide (and then very bizarrely seem to plug into the very foul tide to get upstream… very hairy to watch them, let alone think about doing it) – Pete was taking every caution in timing our departure.  We set off an hour later than we would have done on Sunday.  Pete was on the helm as I was stashing the fenders and mooring lines.  I thought we were travelling a bit faster than usual, but was staggered when he announced we were travelling at 10.24 knots over the ground.  I’m not sure what the air speed was.  We were being hurtled out by the tide.

The harbourmaster told us that there might be a “bit of swell” at the mouth of the lough.  Pete had read in the pilot book that when you leave the lough, you really are at the mercy of the elements, and that once you’re on your way, when you hit the mouth of the lough on an ebb tide, that’s you committed.  No turning back.  Consider that we are travelling out with no wind to speak of, so it’s only the tides that are affecting us.  The ‘hazard’ at the mouth of the lough is two colliding tidal streams.  So, when we were being spat out by the ebb tide, we met the south-flowing channel tide in the Irish Sea.  Two powerful forces, which sent us into a very violent swell.  I’ve never experienced anything like it.  Short, steep waves, which had the impact of stopping us nearly dead in the water.  It lasted for all of 200-300 metres, just pounding us up and down.  I’m glad it didn’t last that long.  I couldn’t read Pete, who’d gone very quiet.  I was ‘gushing’ and commenting on the power of the water, but Pete was stoney silent.  He later said that it had surprised him; that there really would have been no chance to turn around (and try and fight the tide) and that if we’d left yesterday in all of the wind, we’d have been in big trouble.  Cheery thoughts!

Just as quickly as we’d been thrown into it, it was behind us, and we were back in very slight seas. A general murkiness and no wind!  Bah. It would be a day of sailing under the engine.  The motion through the water, and lack of wind, meant that the mainsail would have flapped around, annoyingly, so we didn’t even bother to raise it.

Carrying the information from the aquarium, I had renewed energy to look out for sea creatures.  Leather-backed turtles (unlikely in the sea) and basking sharks… However, it wasn’t to be.  Not even a wee dolphin.  Plenty of guillemots, a jumping fish, gulls and a solitary gannet (now confirmed as an identity after checking online).  It wasn’t much of a haul!  Pete

Somewhere mid-channel Pete managed to get a phone signal, so he was able to reserve a berth in Peel (they said that they would, even though they don’t, which was reassuring)!

The mist and murk descended around us, and for about an hour we were sailing in thick fog.  Pete’s least favourite! 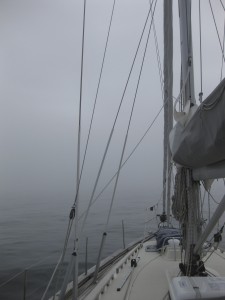 However, this gave a chance to give the radar a good workout.  There were a few ‘blobs’ on the radar which Pete then tracked.  He said there was a really large tanker nearby, about 500m away.  Neither of us could see it, but we heard it sounding its foghorn – very eerie.  The radar showed it passing behind us, which matched the horn sounds, very reassuring.

The fog lifted, but Pete was still ‘playing’ with the radar.  It was still murky, so the radar was picking up things before we could see them with the naked eye.  Pete announced that there was a fleet of six boats coming upon us – it turned out to be fishing boats, trawling.  And you don’t want to get too close behind a trawler, so we had decisions to take about whether we needed to alter course.  However, the six of them weren’t travelling in formation, but we staggered, so we had to make a call at a time.  In the end it was all good – no course changes needed.

Both of us had expected to be able to pick out the Isle of Man easily as we knew that it was fairly mountainous and pretty sizeable.  However, the mist didn’t allow us sight of it until we were pretty close.  It was good enough to navigate when we needed, but I think we both felt a bit cheated not to see land looming towards us.

We had to wait in the bay for a little while as the swing bridge was opened and a flotilla of boats were let out.  We’d seen a steady trickle of boats leaving over the last few miles (both on radar and through the binoculars).  The harbour at Peel is tidal, which means that you can only access when there’s enough water to get over the sill.  It isn’t a ‘lock’ as such, but there has to be enough water to get in and out.  The swing bridge is a pedestrian bridge which has timed openings.

We were called in through the bridge by the harbourmaster, waving at people waiting to cross.  We were both staggered at the number of boats in the marina; it seemed totally rammed, so we were happy to have been allocated a berth.  B20, we had to find.  A very helpful marina man waved us through, and we squeezed through.  It was a bit tight, but with the help of him and the skipper on the boat in B19, we were in.  All tied up by about 13:20… time for lunch!

We had decided that we’d spend two nights here, spending the afternoon in Peel and then doing something further afield on Tuesday. It was still a little murky, but during the afternoon, the murk lifted and it ended up as a really pleasant afternoon. 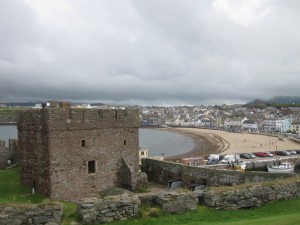 View over Peel from the castle….

We spent a couple of hours mooching around the castle.  It’s ruined, but with skeletal structures of buildings still identifiable.. particularly given the audio guide that we were given.  This was quite informative about the buildings, but got a bit ‘samey’ after the 30th building… The thing it lacked for me was any overall context.  I know that an “Edward” built it – but why?  Why was it extended so many times?  How many battles were fought?  This, for me, is the interesting part of history – the ‘how’ and the ‘why’ and not just the ‘what’ (which was what the descriptions of the buildings was).

Anyway.  We stumbled upon a delightful ice cream parlour, Davidsons.

Our friend Marc, his wife is from IOM, so I’d messaged them for some suggestions.  Davidsons in Peel was certainly on her list, which we were pleased to tick off!  She gave caution to the local pubs, but we had no issue with the one that we visited last night – we sat outside in the sun, Pete said the beer was good, and we had a great chat with a fellow yachtie.  All in all, a good day.

Our day of shore leave began under yet another shroud of mist!  Would we ever get to see the landscape of the Isle of Man?  Using a combination of Marc and Lee’s suggestions, we set off to discover the southern part of the Isle – at least bits of it.

We took a bus from Peel to Port Erin.  50 minutes of views of mist!  From Port Erin we caught the steam train to Douglas…. another hour of misty views!  It was a fun way to travel, with me ending up covered in speckles of soot which blew in through the window! 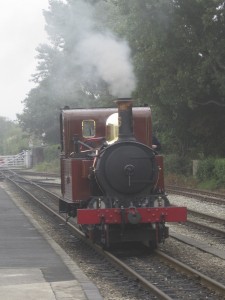 In Douglas, we were in search of some Admiralty charts for the Welsh coast at the Chandlers – they didn’t have any in stock, but would have got some if we’d been staying longer!  We also were in search of lunch.  We lucked out at a really great place, 14 North.  A slightly frosty waitress, but an utterly charming owner – he was a food and “Man” enthusiast, singing the praises of the island produce.  I had an amazing salad and Pete opted for a pizza-like flatbread.

As we left Douglas, the sun had finally managed to burn through the mist, so the return bus journey was a reward for persevering with the mist in the long journey to Douglas.  It took about 30 minutes to get back, and it was lovely to actually see the green lands of the isle’s interior.

Pete has taken our laundry into the town, where he spent a couple of hours babysitting it.  I’ve been journalling.  Time to test that the beer is as good as it was yesterday and make some supper.

Tomorrow we head for Holyhead, Anglesey.  I’ve peeked at the weather… no wind!  And at 60 miles to go, that’s going to feel like a long day, particularly as we can’t leave the marina until the tide’s over the sill…. 12:30 tomorrow!