The wildness of the wind died overnight, mercifully, so we were able to make our early exit from Bangor.  Both of us woke feeling a bit jaded, a bit tender… something had disagreed with us on our rare posh meal out!

We decided that we’d go anyway, sitting around all day didn’t feel like the right thing to do.  We left Bangor at 07:00, bang on time.  The wind looked like it might be favourable, so we hauled the mainsail just about as soon as we got out of the marina.  Pete decided that he wanted to motor through a slightly tricky navigational passage – and with both of us not feeling 100% it was a sensible call.

This was the island, Copeland Island, which we were supposed to sail between (between it and the mainland) through the Donaghdhee Sound on the way up to Scotland… but the conditions were so awful that we took the long way around.  This time the conditions were good, but the crew was a bit dubious!  Anyway, it was no problem.  The only problem that we encountered was that the wind died off… it just drifted somewhere else.  Pete was flagging, so I sent him down below to get some more sleep, leaving me with Doris to steer the course.

It was pretty tranquil.  The visibility was amazing, giving clear views across to Scotland, the Mull of Galloway.  There was a boat that had left Bangor just after us, who was desperately trying to sail.  I could see their spinnaker flailing as the wind half-heartedly puffed enough to fly it for a few seconds at a time.  There was no one else around.  I watched some sea birds diving fish, we think gannets, but that’s an unconfirmed identification!

Pete emerged after an hour or so, feeling brighter.  We continued to steam southwards.  It was a little frustrating!  I was trying to raise the harbourmaster at Portaferry, but couldn’t get any response… Slightly frustrating.

We’d heard good things about Strangford Lough from various people; at the beginning from Kevin and Sue but this was supported by numerous people we’ve met along the way.  They all also cautioned the approach in the same breath.  There are some serious tidal issues to plan for and traverse.  These are the Strangford Narrows… at points the channel is little more than 400 metres, and at springs (which is where we are) the tide races at up to 8 knots.  You don’t want to be tackling that when there’s wind over it!  Needless to say, our skipper had timed our arrival to be at just about the most benign.. around slack tide.  He’d judged it brilliantly.

The issue was where to berth.  The Irish Sea Pilot gives a few options.  Pete wanted to moor at Portaferry, but we had no idea if this was possible.  We decided that we’d go in and take a look…

I tied fenders to both starboard and port side, as we had no idea which side we’d need to moor – if there was a space.  With the binoculars I was able to read that there were visitor bays available (lots of them, as it happens), and it was just a first-come-first-served.  Why didn’t the Pilot Book say so?  Pete identified one that he would go for, giving me about three minutes to lay the mooring lines, and then prepare to leap!

I leapt, all good, but the angle of Pete’s approach wasn’t great (as he said himself), so I was trying to heave all 13 tonnes of Whinchat off the pontoon.  The fenders were trying to squeeze up, under the pressure, and so I was trying to push off to allow them to drop down.  Forget about tying off!  With a very loud screeeeeaaaaaammmm, I did it, and then tied off the midships.  The bow next, and then between us, we were able to walk her forwards and set her snuggly in.  All good, in the end!

We had picked up a guide to Portaferry in Bangor, so our afternoon was a trip to Northern Ireland’s Aquarium and Seal Sanctuary and then a coastal walk…

The aquarium was pretty good; interesting displays.  We learned that we might even see Basking Sharks (a new creature to look out for on our way over to the Isle of Man), and in the lough, turtles!  You never know.  There were no seals in the outside pens, but we saw five babies (of only a few weeks old), in the seal ‘hospital’… so sweet! 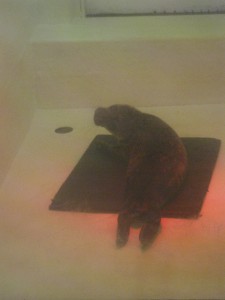 From here we completed a 5-6 mile walk around the coast, up the lough.  We decided that this lough is very pretty, but it’s not ‘stunning’.  I think we’ve been very spoiled by some of the places we’ve visited in Scotland. 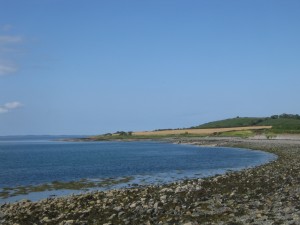 We took the ‘mountain road’ back towards Portaferry, which made a pleasant contrast to the coastal walk – giving some shade to protect my very sensitive skin.  We were so thirsty by the time we got back to port, so we decided to call in at the pub on the shoreline.  What a mistake!  Daylight robbery… two pints of soda/lime cost £10.80!  Pete was in total disbelief!  We made them last….

We decided that we’d spend two nights here, as we’d also been told (by Kevin and Sue) that there is a lovely National Trust property near Strangford.  This would be our excursion for Saturday.

No alarm clocks this morning, so for the first time since I’ve been back from Uganda, it was a nice sleep in!  A very lazy start to the day.  Pete went to have a “porta-shower” on the marina wall (he said it was good, clean, plenty of hot water and a great view of the water through the air vent).  I didn’t fancy that; Whinchat delivered a luxurious shower (well, I knew that we’d refill the water tanks).

Pete went to get the papers (another luxury!) to read later, and we set off on the ferry to take us over the water to Strangford (even on a non-boating day, Pete will find the watery option!!).

We had to ask for directions to Castle Ward, the NT property, and were directed beautifully.  It was a lovely walk, through the extensive grounds.  We certainly took ‘the scenic’ route, not that it really mattered. 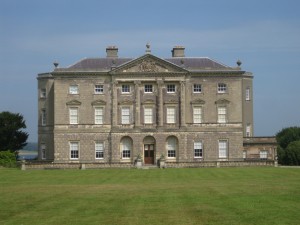 We joined a tour at 13:00 of the house.  The guide was really good, giving an account of the social-history of the house that formerly belonged to the lineage of the Lords of Bangor… The house was initially built in the 18th century, by a couple who couldn’t agree on the style.  He had the title, and she the money, so they compromised and the back of the house was built in the gothic style, and the front ‘modern’.  We thought this was a lovely story! We also learned that the children of the house were raised in the nursery on the third floor (you could see up to it through a glass window in the ceiling).  The boys were allowed down at the age of six, when they were sent off to boarding school, but the girls basically didn’t emerge until they were 21.  We decided that I wouldn’t have made a very good young girl in such a society!

We ate lunch in the sun, and then took the ferry back to the boat… stopping off for an ice cream… We’ve come back and read the papers; unfortunately the wind’s blowing off the sea into the cockpit making it a bit too chilly to sit on deck.

Tomorrow we hope to set sail for Peel, Isle of Man.  The weather is set to blow up overnight, as an occluded front approaches.  Let’s hope it moves through as planned, and that the tide calculations Pete is doing work just as well as when we arrived.  It seems a fragile balance at times!

Well guess what?  It did blow up, brought rain and terrible visibility.  So when the alarm went off at 06:00 both of us looked at.  “I don’t fancy that”, I said.  That was that – back to bed.  Not that I could go back to sleep.  I got up and read the bits of the paper that I’d missed…

We had a pretty lazy day.  I collected the papers.  We devoured them.  I sat online for a good chunk of the morning looking through all sorts of stuff on Uganda.  We headed out to have a pub lunch, choosing well… at least ‘google’ did.  The Cuan at Strangford, winner of all sorts of Ulster good food awards for good reason.  The rain was still coming down, so it was back to the boat for more strenuous paper reading.

And so the day passed.  We’ve a small collection of DVDs on board, and we watched a “shoot ‘em up” John Travolta “From Paris with Love”.  Avoid at all costs!  It was truly dreadful.  Not worth the effort of trying to justify why….