We had a morning in Glenarm, waiting for the tide.  There isn’t a whole lot to do!  The harbour master, the friendliest marina person we have encountered on our trip, had suggested a fry up at the local cafe – but they didn’t open until 10:30, so that was a vague notion cancelled!

I was captivated by the black guillemots in the marina, which occupied my attention!  They were nesting in the harbour wall, and were flitting about, squeaking as they went.  The have the most amazing red mouths – beaks shut it looks totally black, but open, is the most wonderful red!  They also swim so fast under the water… I watched one charging under the water off the back of the boat, to pierce the surface in the midst of some of its mates, causing a right curfuffle… very amusing! 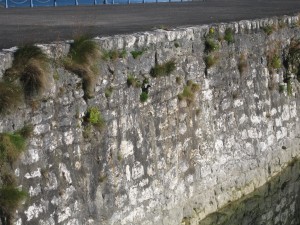 We had lunch and then set off, giving an exemplary tutorial in slipping out of an in-between mooring.  There were other boaters watching what we were doing…. which wasn’t straightforward, as we had to lay longer lines to the pontoons to ease out on (we were attached to the boat next to us, the small one on the right in the photo at the top, which wouldn’t have been very friendly to spring out on).  Anyway.  All good, and off we went.

The wind, well, there was enough of it, but totally from the wrong direction.  Every course change we made – bang into the wind.  It wasn’t the day for us, and as we were relatively late leaving, we didn’t really want to add the distance and sail… so we were very lazy!  Hour after hour under the engine.  A couple of boats set off just after us, and arrived at Bangor before we did.  My skipper likes to take an ‘off shore’ route, he really does… Happiest a couple of miles off shore.  Well, the other boats steered a course (also under engine) much closer in, and they beat us to Bangor by a long way!

Actually, we did sail for about 30 minutes, the last 30 minutes as we were coming across to Bangor.  Pete on the helm, always determined to sail when he can, even for a few minutes!

Coming into Bangor for the second time, was far less stressful than when we had rocked up in May.  It was just about the worst passage up from Ardglass… the sea, the wind – oh it was horrible.  And here we were drifting down towards the harbour.  It also really helps to have a “mental” map of the layout of the marina… So when we were directed in to “E” we had a vague notion of where it was.

We were told that we could moor anywhere on “E”, up to 21…. whatever that meant.  No idea for a port-side or a starboard-side mooring!  I rigged up the fenders for both sides, but the mooring lines were a last-minute laying.  We prefer port-side, and there was one in sight, so like a whirling dervish (Pete coined that today, and it so fits) I was flitting around laying the lines.  A bloke from the next boat came to take the mid-ships, which was very sweet, but I need to be tougher on directing any assistance.  Pete reckoned we’d have managed better without him, but I can’t say “no” to help – particularly when you’re the one having to jump off the boat… and these were wobbly pontoons!  Anyway.  Said bloke, ran the line forward, which wasn’t what I’d have done, so it took a bit more effort to get us alongside…. All done OK in the end, but a little more on the “pfaff” side.

I really like the facilities at Bangor.  We had decided to have two nights here, to allow us both to use the wifi, provision and do the dull job of laundry….

We had a good day ashore on Thursday, ending with a meal out at the “Salty Dog”… a hilarious french maitre’d, slightly pompous, but very funny (he had Pete weighed up so succinctly).  I had the most amazing mussels, cooked in cider… an absolute bucket full.  Pete nearly wished that he could eat shellfish!

The wind blew wildly on our day ashore, and had it been a sailing day we’d have probably stayed where we were.  As it was, the wind had died by the end of the day, and with a wifi connection we were able to check the Met Office online and work out that we could continue our journey southwards……