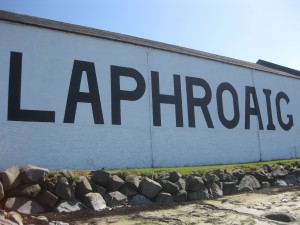 WNW 3-4, with slight seas becoming moderate for a time

The weather forecast broadcast that we heard at 08:10 made us think again about our plans for the day.  The forecast was for better wind (more of it) than for Wednesday, so we both thought that it was THE day to cross the North Channel that separates Scotland from Northern Ireland at the Mull of Kintyre).  The conditions can be horrible, but it seemed that this would be about the best weather window that we could hope for.

Pete did some initial planning, and he worked out that we would need to depart at 13:30, in order to get the favourable tidal streams running south through the channel. This gave us the morning to make a trip to one of Islay’s many whisky distilleries.  Pete found that Laphroaig was the closest,  a 30 minute walk, so this was the easy choice.  But first we had to move from our rafted position as the Germans wanted to leave before us… all executed perfectly!  It’s good when you’re on show that things go well.

Port Ellen in the morning seemed a whole lot prettier than it had done on the previous evening.  Perhaps it was the seal hanging about in the harbour, the swan and signets and the oyster catchers along the bay.  Perhaps it was the lovely walk that we took along the road to the distillery. Perhaps the hassle of arriving had eased.  Whatever the particular combination, we had a lovely morning in Port Ellen.  We tried two different ‘drams’ at the visitor centre, the 10 year old for which Laphroaig is well known… a very peated number!  The other was an 18 year old, which was much softer without the huge smokey overtones.  Pete favoured this one, so a forth bottle has been added to the whisky cabinet! 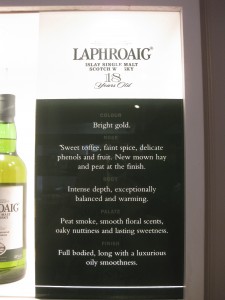 The other purchase was a cap!  One of the awful consequences of the anti-malarials is an acute sensitivity to the sun.  I managed this well in Uganda, but on the boat there’s been little place to hide from the sun, and I am sporting a serious “Rudolph” look which troubles me… I am paranoid about getting sunburnt at the best of times, but now.. well.  I’m wearing a cap with “Laphroig” on it.  What have things come to?

We eased out of our mooring at around 13:30, on time.  We had a lovely sail across the sea towards Northern Ireland…. said cap doing its job against the worst of the bright sun.  We didn’t have much wind to speak of initially, so Pete rigged the spinnaker pole (for the first time) so that we could goose-wing with the wind running behind us. I have to admit, despite a few nerves about it being deployed, it really helped our speed in the water. 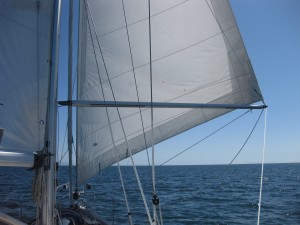 The wind then shifted enough for the spinnaker pole to be rendered unhelpful, so Pete had the joy of lowering it.  From my position on the helm it looked a little hassly, but Pete reported that it was easier than he expected it to be!

As we neared the tip of the Mull of Kintyre, the wind all but died, so we brought in all the sails and thought that we’d be set motoring for the rest of the way.  I set Doris with the challenge of taking us across the tidal stream towards Glenarm, and she didn’t do very well.  Her cross-track error was terrible, adding metres before my eyes.  I wondered if she’d need a little while to settle in to it, but no.  I had to take over…. just when I thought the last 20 miles would be chugging under motor, the wind came back.  We must have been in some weird wind shadow created by the headland (though why, I have no real idea) and the WNW was blowing as much as it had been all day.  This was a big relief, since we travel quicker under sail than engine.  Almost immediately, the “eta” dropped by about 30 minutes! Result.

We arrived in the approaches to Glenarm about sometime after 20:00, with no real idea if there was room.  On first inspection as we came through the breakwater, it would seem like a ‘no’!  However, I spotted the harbour master waving at the end of one pontoon.. he had watched us approaching and had an idea of somewhere that he could tuck us in.  Literally, between two boats!  Snug.  If he hadn’t have been there, we wouldn’t have had the nerve to do it, but he was really comfortable with it.  I had the job of standing on the bow to throw the mooring line, and really didn’t want to embarrass myself with a girly throw…. it was a good ‘un!

At 21:00 we were all tied up, and as Pete tidied up, I cooked supper.  It had felt like a long day, and I was certainly ready for my bed.