Another day of early rising for me… and another glorious sun rise witnessed.  Actually, I took this photo about an hour after daylight was seeping over the hills of Jura, as it was the warm hues that were being cast in the cabin that inspired me to get up.  This was the image that greeted me: 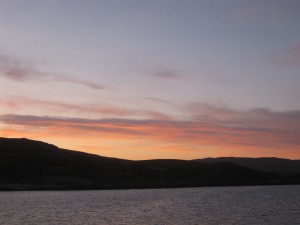 I saw a couple of seals swimming around the boat – not that close – but having been so ticked off by Pete the other day for not alerting him, I called for him to come and see them…. only they vanished!  For a short while only.  He nodded his appreciation and then crawled back into bed.  I tried to go back to sleep, but couldn’t rest.  Hence the second of the dawn photos, when the sun was actually appearing.

After such a calm night at sea, we were pleased that hadn’t move anymore!  No dramas at night.  Our destination for the day would be the Whisky Capital of Scotland – Islay, and the town of Port Ellen.  It is further than both of us were expecting, and it was crucial that we took the tidal stream south through the Sound of Islay… this meant leaving at 12:00 so we had a lazy morning (me writing!).  Our exit from Tarbet was high on adrenalin!

Firstly, the anchor that had just-about-decided-to-set came up without issue, except that there was a forest of seaweed that had wrapped around the chain and the anchor itself…. as shown below: 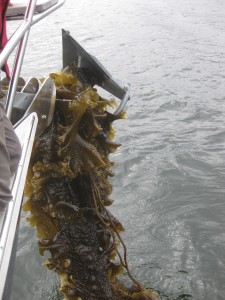 I called Pete to bring the boat hook, so that I could try and unhook the weeds as it came up, but the tendrils were so well wound around the chain that I was worried that I’d snap our boat hook (plastic).  He watched as I tried to flick the seaweeds off, but no luck.  He told me to haul it completely and that we’d have to lean forward and do it by hand when it was raised.  Only, because he was now not on the wheel, he wasn’t steering to my hand signals the direction that the chain was lying in (like an aircrew person guides in a plane to the stand, that’s me on the bow directing, only without the luminous paddles) so it was jumping off the runner…. and jumped off and ripped through the string that holds the bolt to secure the anchor at sea (lost? you might well be!).  So, back he goes to the wheel, with me continuing to raise the anchor… The downside of this was that the weeds just slipped down the chain as I pulled up, resulting in the jumble of spaghetti sea weed that you can see on the anchor.  Pete had come forward by now, and send me back to the wheel to drive as he tried to unpick all the seaweed off.  Here comes the next issue, which the photo above illustrates well…. One of the problems with the ‘super Roca’ is that it often comes out of the water ‘upside down’.  I’m not sure if its the roll-bar that means the weight distribution isn’t great for recovery, or if the chain was twisted when Pete and Tim attached it, but it comes up ‘upside down’ most times.  I’m not strong enough to turn it, so this is a job that Pete gets to do.  This morning was no different; he dropped the anchor back to the waterline and tried to turn it on the chain…. Then I heard a few choice expletives… the recovery of the Roca had dinted the bow of the boat.  Oh no, this was not our finest anchor recovery!  At least there was no one else around.

Pete then had to undertake a repair on the bow, to resecure the anchor bolt – cutting another piece of string to lash it on with.  Pete told me to steer slowly towards the first way point…  And then I realised that the chartplotter wasn’t working.  The ‘boat’ symbol which represents us, hadn’t moved off the anchorage…. I shouted the issue to Pete, who told me to turn off the unit down below – at least that’s what I thought he said.  He didn’t, so this miscommunication resulted in a heated exchange of words and Pete coming back to try and reset the whole navigation system.  We had speed, depth, windspeed and a GPS position… but nothing else.  I was still chugging us slowly out, but Pete came bounding up to say that there were many rocks and that I should turn back towards the anchorage…  He was up and down the companionway steps many times, resetting the chart plotter… and then came the command for me to “Steer 270”… he’d gone back to navigation the old fashioned way, and gave me a course to steer.  This was a much better idea; steering 270 out of the loch, and then when on a bearing of 245 to the lighthouse, to turn to the next course.  It was good to feel a little bit in control!

In the meantime, there was little else to do except appreciate the wonderful scenery, the fossil beaches left from a previous geological period..  I hadn’t really noticed these on the way in (due to the activities of getting down the sails and also scanning the landscape for the markers).  It was another moment in a geography text book! 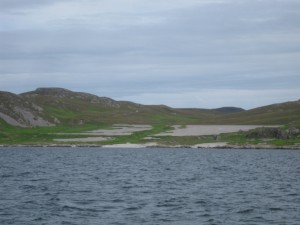 But back to the sailing…  Pete came up on deck, and I (very helpfully) suggested that we turn everything electronic off at the fuses and reboot from scratch…. *blank look*… “at least do the Furuno Gear then..”

So, partly to humour me, I think, he turned everything off, including the GPS feeder, and re-powered the system…. Guess what?!  It worked!  I’m not actually sure that I made any difference, but the gremlin that had taken up residence was gone.  We might actually be able to get on with the business of sailing!

It was a very pretty passage; the sound of Islay isn’t that wide, so there is lots to admire… and there’s always the hope of seeing dolphins.  There weren’t any, but I did spot some cows sunbathing on a beach! 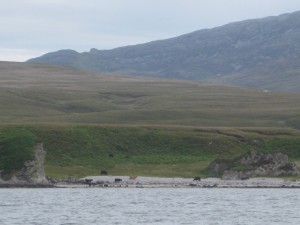 Pete’s tidal calculations were spot on, and we raced down between Jura and Islay, cruising with the wind behind us and the tide with us at about 8 knots… Sailing when it’s like this soon dispells all the angst that also happens – the wonderful landscape, the kind winds and the ease of Whinchat gliding through the water is enchanting.

The wind picked up just when we needed it to, when the tides had spouted us out of the bottom of the sound, and from being behind us, we turned onto more of a reach.  We were taking hour shifts on the helm, and without the effect of the tide, I just edged the longest distance achieved in an hour – 7.0 knots.  It was really good fun.

With a little under an hour to go, we dropped the sails and motored the course in towards Port Ellen – we would have been beating into the wind by then.   We had no idea what to expect, or if there would be any space for us…

Port Ellen is a funny place.  The marina, more like a yacht haven, is a ‘sort yourself’ and can accommodate 40 boats… Well, there were less than half of this in, and yet seemingly no room.  The inside berths lie at less than 2m, so we weren’t sure if we could take one of those.. Pete edged towards it, and then chickened out!  We were just deciding what to do, when the skipper of a German boat on the end of the pontoon asked if we’d like to raft.  Yes please!  They were taking up the space of four boats, Pete reckoned.  Of course, by this time the wind was still blowing strongly, across us, so coming alongside was a slow process.  We weren’t rigged to raft, so I first had to raise all the fenders and then tie the lines…. as we edged towards them.  I managed to not do a girly throw and got the midships line to the waiting crew, who held us alongside.  Then the bowline to the skipper, who secured us.  For some reason, the guy at midships then untied us… meaning that we drifted out!  The skipper on the bow was calling for a long line to take to shore, but Pete overruled.  It was all a little harder work than it should have been, but eventually we were all tightly alongside.  For the first time, we used the “Swedish” long line on the reel, to take an extra stern line to the shore.

Port Ellen was deceptive.  On our first trot around town, and it felt a bit run down… a bit tatty.  We ended up in the public bar of the Hotel for a beer, surrounded by loudly cursing Scotsmen, drinking whisky chasers and watching the game (Uruguay vs Paraguay, quite good actually!).  We dined on board, not really fancying the Indian.  As the sun set, the town took on a different character, and in the fading light of the day, was positively pretty… 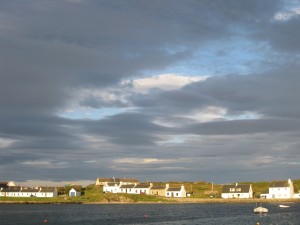 Both of us were ready for sleep, after quite an eventful day on the water.