Three weeks away from Whinchat, and I returned slightly apprehensive and overwhelmed by the experiences in Uganda – Karen and I had the most amazing trip, and it will take me a long while to ponder it.  I was apprehensive on returning as I feared my sea legs hadn’t followed me back north, and that I’d be deskilled in the finer arts of sailing.

Fortunately, the weather gods were shining on me.  I seem to have managed to bring some of the Ugandan sunshine to Scotland – which was a blessed relief! The weather seems settled, which more importantly didn’t mean crazy winds.

We were debating whether to try for an anchorage on the southern end of Mull, but in the end (when I was trying to clear a number of emails before we dropped the wifi), Pete suggested that we head for something closer… which brought us to one of the places that he’d originally set his heart on.

We eased out of the marina, for the last time on this trip, at 11:15, with me just about remembering all the points to watch and give the ‘clear’ yell on!  Fender clearing and mooring lines coiled – well, it was just like I hadn’t been away in that respect.

We drifted southwards under the front sail, the yankee, which gave a staggering rate of 3-4 knots, but that was OK.  The distance wasn’t great, and it was good to be sailing, well, almost drifting.

The entrance to the anchorage wasn’t as challenging as some we’ve encountered, which was also a good thing.  Nothing too taxing!  There were four boats in when we arrived, and we tucked up into a space and the anchor laid perfectly on the first go… another relief!  I had remembered enough of Pete’s rather haphazard anchor marking system to work out the correct amount of chain to leave.

We sat on the boat for a couple of hours, and then went ashore.  Pete had been talking to a guy at Dunstaffanage and knew that there was a nice walk to a pub to be enjoyed.. so we went ashore and indeed had a lovely walk.  Wildlife sighting including one red deer bounding across the bracken!

I’d completely forgotten that this was the place where you could see the famous “bridge across the Atlantic”, which was probably even more impressive when you’re not really expecting to see it. 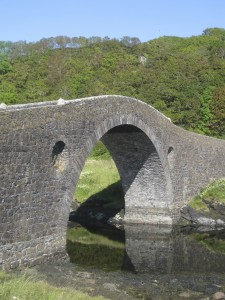 We had a drink in the garden watching swallows zoom about – presumably eating the midges in the air… The same guy that Pete was talking to warned of the midges, and so we were prepared with Avon’s ‘skin so soft’… and it worked!  Result!

Back on board, I felt it was my turn to chef, Pete growing a little weary of cooking for himself.  When things were under way, I went and sat on the bow seat with my glass of wine.  I was thinking about Amy Winehouse (we’d just heard about her death) and the contrast to the baked land of Uganda.  I was so thrilled when three seals appeared, and I watched them for a while.  I did try and shout to Pete, but over the music, he didn’t hear… and no, I confess, I didn’t go and get him… Bad me!

We were treated to a spectacular sunset, late in the evening, the picture below was taken about 22:20… remarkable.  A wonderful image to end the day with. 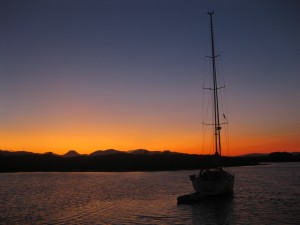