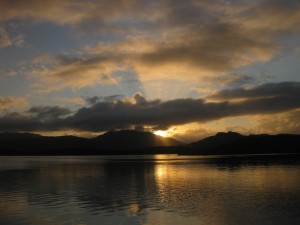 I’m happy to report that the alarms were set, they did go off and all was well.  I decided to change my alarm sound to make sure that Pete could rise with a smile (he’s not his best at 05:00, whereas I can be quite ‘Tigger’-like). He did laugh when he heard the ‘old fashioned car horn’ blasting out… We were treated to a wonderful sunrise.  The first we’d seen of the trip! I’m sure it won’t be the last either….

We had coffee and decided that we’d have breakfast when under way.  The wind was always on the nose through the Sound of Mull, and not always very much of it, with the odd rain shower…so we motored until it was a little more helpful, with Doris doing the hard work. At about 08:00 I made bacon and eggs, which was very welcome.  Delicious even!

At 08:50, some three hours or so after we’d set of, we were able to switch off the engine and get sailing.  This was really lovely, despite some hefty showers of rain!  We sailed for a couple of hours up Loch Linnhe, initally on a beam reach, then a broad reach to a run… Really cracking sailing up alongside a little island, Lorne… But then we had to turn to go south again towards Port Appin, so it was engine on again!

We moored at 11:30, six hours after setting off, still with most of the day ahead of us!  The winds were pretty gusty as we went to moor, with a very strong tide… I wasn’t sure that we were going to make it, but we did, no fuss.  It was a bit of a bouncy old mooring, a combination of the wind and the strong tidal flow… but we were where we wanted to be.

We decided to go ashore and have a lovely long lunch, which we hadn’t done in ages, probably since we were in Bangor (although we couldn’t hope to have a six hour lunch). We ate in the seafood restaurant at Port Appin, which was excellent…. although both of us were swaying a little with our sea legs!  We went for a short amble after lunch, but it’s never much fun complete with full foulies and a lifejacket when on shore.

We decided to go back to the boat and ‘chill’; it had been a very early start after all, and the sun was now out.  The afternoon was spent very lazily on board, but it was a bit of a rolly ride.  The wind and tide were seeing that we were constantly moving… not side to side as we had been in Penzance, but rolling backwards and forwards.  I went down below, and had to lie down, as the horizon was doing things it shouldn’t.  I did manage to cook supper, which was encouraging, as it really meant my sea legs were finally here.  We were both worried that it might mean a terrible night, with us making plans to sleep nearer the centre of the boat (more stable).  We didn’t have to.  Thankfully the wind did its usual trick of calming down over night, so in effect, we were gently rocked to sleep by the tide….