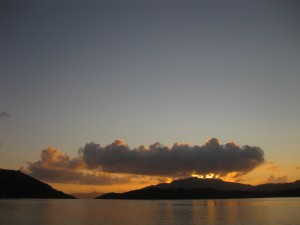 This would be the day that we would head southwards, so we needed a wind without any ‘S’ in it… But what did we get?  An unhelpful SWer!  Argh.  This, at least was the forecast in prospect, but we sometimes live in hope that the weather folks have it all wrong.

We weren’t in any hurray leaving, and we eventually dropped our mooring at 10:40.  We’d seen a gaff-rigged boat leave somewhile before us, rather impressively leaving its mooring under sail.  When we were leaving, we could see it across the entrance to the loch, sails fully launched.  “It’s not moving very fast”, I said…. Actually, it wasn’t moving at all.  It had somehow got grounded, proving that the channel should be respected (as we had) and that everyone can have a bad day at sea – even those who can easily sail off a mooring buoy!  Also in the bay, were seals.  I was hopeful that this would be the day for us seeing minkie whales…. having realised that sea otters don’t live in deep water…  Pete had ‘booked’ the whales, just in case, phoning the “whale booking line” who promised that they would be available near the island of Muck… Hmmmm….  I think he was just humouring me!

We passed the marooned boat, and they were trying all sorts to get themselves off… and I was pleased when we saw them sailing north some time later.  *shudders*…

To make up for the lack of sailing in the previous days, Pete was determined (read very) to sail, and to sail around Ardnamurchan.  This was an endurance event for me.  The wind was steadfastly from the SW, which meant that we had to tack around the point… great mile long tacks, making gradual progress south.  We sailed nearly all day, all 10 hours of it.  The wind didn’t help us as it wasn’t blowing that strongly either, and all day we plugged against the tide.  There were some mighty low points of the day!  It took us about six hours to sail the 20 miles ‘direct’ around Ardnamurchan….only because of the tacking, it was a greater distance.  The average rate of knots is not great.  The worst hour was somewhere just after lunch…

Slow progress = frustrating… but at least it was sunny!  The best part of the day, I admit, came because we were sailing.  We were off Ardnamurchan, and Pete spotted some dolphins who were steaming ahead on a mission…  Then before we knew it, they’d ‘missioned’ towards us with the intention to play.  It was AMAZ—-ING!  I grabbed my camera and headed to the bow, where I had a cracking view of them.  There must have been about 20.  They would come zooming alongside Whinchat, just under the water, and then jump up in front of the boat, and then dive down… drop back and sort of begin it all again.  Although I watched one dolphin who was weaving in and out at the front of the bow.  I was so certain these would be excellent photos, as I could ‘read’ what they were doing and therefore grab that winning shot of them emerging from the water.  Pete and I had swum with dolphins in Florida, and we were told that the dolphins respond better to cheering, laughing and noises of excitement… so we were both whooping and laughing to encourage them.  They hung around for about 10 minutes, and it felt magical.  All of a sudden it seemed they remembered they were about to do something else, so off they charged… not heeding my call to “come back, you’re much better than minkie whales…”

So, those photos?  Muppet of the day award goes to yours truly, as when I checked, I hadn’t taken a single shot.  I have no real idea what happened, but in my excitement, I can’t have switched the darn thing on.  Oooops.

The dolphins certainly broke the spell of the ‘endurance’ element to the day, which also changed as we needed to turn towards the east to head around the point, meaning that the wind was going to allow us to sail in the direction that we wanted to!  Hoorah indeed!

We had a choice of destination to make – either Tobermory or the lovely anchorage at Loch Droma Buidhe… we opted for this one, as it was so pretty.  Slightly further (which I knew).  I had the genius idea to fire up the Ramoska and cook supper as we were sailing along… so that when we eventually arrived we wouldn’t have to wait another hour or so for our supper.

In the loch, we anchored more or less in the same spot that we had done previously – this time with the right amount of chain out.  Dinner (probably sausages, for a change… not!) was very welcome, and the end of the day delivered yet another lovely sunset.

The plan for the following day?  I was adamant that I didn’t want another day of plugging tide, so that meant we had to move with the tides!  a 05:30 departure it would be then… if the alarm clocks went off!