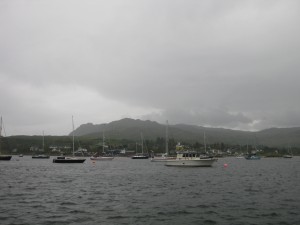 We woke to the continuing story of rain, a lot of rain!  We were heading southwards, back towards Ardnamurchan, and decided that we’d try Arisaig, which had come recommended by yachties that we’d met along the way.  Of course, the wind was on the nose, so it was either motoring or facing a longish day in vile weather!

We set off under power, and that’s where we stayed for the trip.  It wasn’t very good progress because we were plugging a bit of tide (a knot), into the wind, and the sea was a bit lively.  I was surprisingly cheerful, and we were singing quite a lot of the way… ‘how many songs could we sing about “rain”’; stuff like that.  It whiled away the hours.  Pete did muse, briefly, about sailing.  I couldn’t believe it when he said,

Arisaig’s approach is quite challenging; another entrance which is blighted by hidden rocks and narrow channels.  As for Moidart, Pete was driving and I was chief spotter of navigational aids… this time we did have some channel markers – not buoys, but long sticks out of the water… not always very obvious!  It was 2.6 miles through the navigational hazards, which was tense at times.  Especially during one part when the depth plummeted – we had expected that it would, but it was something else to see it fall.

I called the harbour office when we were through the channel, and he gave excellent directions to the mooring buoy – number 38 – which would be ours for the night.  Of course, as soon as we were entertaining the idea about mooring, a squall hit us…. it was pouring with rain and extremely windy.  I turned towards Pete from the bow, boat hook in hand, to announce that I could see a big squall approaching across the water (you can see the waves rippling as it advances).  In fact he didn’t hear me, but no matter.  He said the speed hit “0” just as we were alongside the mooring buoy and I calm as anything hooked the strop out of the water, pulled it through and looped us on.  It was a master class!  We were very pleased, and it was one of those occasions when you hope that everyone is watching.  How different to the one in Islay, which took 5 attempts?  I do think our skills have become more honed as we’ve done more of them, but it is such a satisfying feeling when everything goes smoothly.

The picture above shows Arisaig during the afternoon.  Grim!  However, during the evening we were blessed by the most amazing sunset.  You can forgive the elements of all sorts of things when you are treated to such heavenly wonders…. 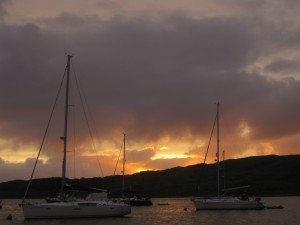