We had two options for Knoydart.  Pete had read quite a lot about Britain’s most remote pub, one that could only be accessed by boat or by a 7 mile walk.  It was on his list of ‘must visits’.  However, some friends of Mum’s friend Jacki messaged (via Mum) to go to Doune for a ‘great anchorage and great food’.  We decided to go with their recommendation.

It was a very miserable day, weatherwise, but as we had all of 5 miles to go, it didn’t really matter.  There was quite a bit of wind, well it was squally, and it rained and rained and rained.  We knew we had to book for dinner, and I was not expecting the questions about what we were allergic to (long list) and that we should aim to arrive at 19:30 for dinner.  I’m still not sure what the place was called, but we were intrigued.  We reckoned it must be more like a dining room, with food being prepared and served without choice.  No matter, we were going on a recommendation!

They have two mooring buoys, so we were able to moor up.  When we arrived, through the murk, there was no one else in.  Not much moving on the water at all to be honest (no one as mad as us at least).  We executed a master mooring, thankfully, as we were just keen to get tied up and in the dry.  Pete was deployed in the dinghy to tie another mooring line through the loop, and as he was fixing the line, I happened to look up and across to the shore, to a sort of valley along the cliff, and there was a magnificent stag munching the grass.  Of course, by the time I’d moved to get the camera, he’d taken off.  It was a wonderful sight, and I was feeling hopeful that this might be the place to see a sea otter….

We hung out on board for a few hours, and then decided that we should have a wander ashore.  It wasn’t raining, but it wasn’t exactly pleasant weather either.  Just damp and cold.  We took the dinghy ashore and ambled around, where we saw more red deer!  This time I was able to get a picture…. 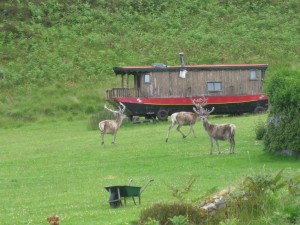 There were no paths, other than deer tracks, so we followed these around the headland, careful to not traipse through the marsh (reeds and cotton were good indicators).  It was lovely, utterly beautiful.  We saw some pretty wildflowers, and I’m certain some wee orchids.  There was a little bay behind the headland, and I was very interested by the rock formations… 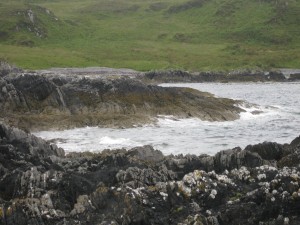 We had the offer of a shower at the place where we would dine, but we couldn’t be bothered to take all our gear with us, so we showered on board and then returned for dinner.

It was a fantastic meal, which began with a Kir Royale!  Heaven!  We then had beetroot and orange soup (perfect on a damp day) complete with homemade gluten free bread rolls for me, salmon and then homemade ice cream, and then local cheeses.  Washed down by a bottle of Mexican wine (really, it was ok) and then some peppermint tea.  No wonder it came so highly praised.

The dining room was primarily to serve the residents, and there was one large group and another table of three.  It’s a remote location where people come to walk, take in the wilderness and take nature/guided activities.  They have a launch, so they can drop you around the coast and you walk back.  I think it would be a real escape.  Check it out for yourself!

They take bookings from yachties, but only one or two.  We met a couple there who had phoned to be told that they were full.  The yacht that was due in cancelled, so the couple were able to dine there…. We didn’t get their names, but they were in Barosa.  They knew all about us, having liked our boat and googled it, coming up with this blog!  Fascinating!

We’d had a great day, despite the damp weather, and thank the recommendation that came from, well, I’m not actually sure who!