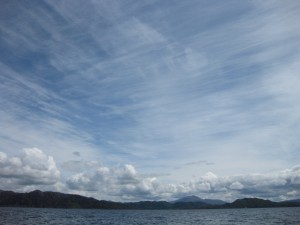 We thought we’d head for Mallaig and try out the new ‘marina’ facilities that were being built, due to open in May.  I phoned the harbour master (who was surprised to hear ‘a lady’!!) and he said that they were late with the pontoons, another three weeks, but that we could come in and take a mooring buoy.  We decided that we’d do that.

Before we set out, we thought we’d go and have a closer look at the castle, and Pete decided that I should row us ashore.  Silly me for complaining that I felt that I was losing my fitness levels (I am).  It’s about half a mile, which probably shouldn’t take that long… unless you have poor technique, which I do.  I have no natural ability – I’m good on a rowing machine, but this bears little connection to actual rowing.  I have no idea which rotational motion to use – arms towards you first or away?  Each time I broke my ‘rhythm’ (and I use that term very loosely), Pete had to remind me which way to set my arms.  It seems that I also have arms of differing strength, with the impact of rowing in semi-circles quite often.  You didn’t think it was possible to tack when rowing?  Well, welcome to my rowing world.  On the way there it wasn’t so bad, and Pete would tap the respective arm in order to row singly to correct the curvature of our course.  On the return, after a very pleasant mooch on shore, was painful.  Against the wind and tide, so progress was very slow, despite the considerable effort that I was making.  I got very frustrated at myself, and then Pete for saying that he’d take over (which would have been a million times worse) despite the growing blister on my hand.  We returned to the boat with me feeling more hassled, and less confident of my abilities.  It was like being in Maine all over again (when we nearly got swept out to sea).

Our passage out of Moidart was much less stressful, unsurprisingly!  It was a beautiful day, with much sunshine.  The wind was also largely behind us, which meant that it was warm in the cockpit!  What a change!  We pretty much sailed the whole way, and with the sun, it was a lovely day’s sailing.

The seascape was really beguiling to me today.  There was land around us, the Small Isles (Eigg, Muck and Rum) and also Skye, but not that close, so the expanse of sea was large and the skies.  Well, wonderful!  As the picture above shows, it was like the sky was curling over us (perhaps it is, strictly speaking) but it was one of those days when you feel small.  I took loads of pictures of the skyscapes (won’t bore with too many here), and the clouds that were coming over.  I was in my own little metereological bubble!

We were on the look out for whales and dolphins (again) but didn’t see any.  More frustrating when we learned from people we moored next to in Mallaig that they’d seen them in the very same water!  Grrr… It’s the story of the orkas all over again!

Mallaig, what can we say?  It is a working port, which has very little finesse!  The mooring buoys that have been laid are very close together, so when we tied up, we were almost on top of Free Will (a smaller boat), but they didn’t seem bothered (they were the ones who had seen the whales, 25 yards from their boat!!!).  The pontoons? 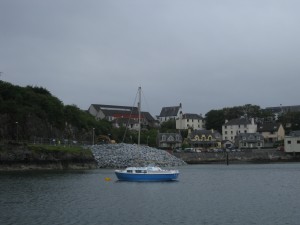 The pile of rubble is where they are supposed to be, not exactly looking like they will be ready in three weeks time?  2012 may be! 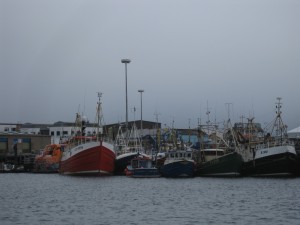 Mallaig really isn’t very pretty, but it’s a commercial fishing port, so lots of activity to watch.  Pete was loving all the comings and goings of boats, ferries…  We decided we’d go ashore, and chose to follow our neighbours.  It was a good call to wait, as there was no obvious place to dock the dinghy.  They were guided somewhere by a local, to the pontoon used to launch the lifeboat, tucked away from the lifeboat itself, beneath signs which very clearly stated “DO NOT OBSTRUCT THIS PONTOON”.  We followed suit, and accessed the land through the RNLI slip, hoping that they didn’t lock it after 6pm!  A night in Mallaig wasn’t exactly thrilling to either of us…

We couldn’t see the Harbour Office, and with no notices to tell you where to pay, then what else was there to do except find a beer!  We decided to hold with the plan to eat on board, partly as the land offerings weren’t exciting, but also to make sure that we didn’t swing into Free Will on our mooring.  There wasn’t much wind, and the tide had all boats lying different ways.  Very odd.  In fact, it was a restful night, without us clashing on the moorings.