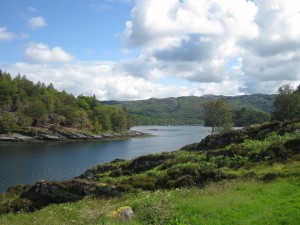 This would be a landmark day – the forecast was looking good for heading around the Ardnamurchan Peninsula, meaning that Pete could say that he had rounded the most westerly point of the Great Britain…  The forecast was good in that there were no strong winds forecast, but it was all in the wrong direction!

We upped anchor at 10:15, with no problems!  Phew!  We had made the better selection, and other than a little mud, no issues on leaving.  I was the one driving off, with Pete taking the role of winch wench for a change!

We knew that it was going to be a long day; we wanted to take advantage of the fine forecast and sail to Loch Moidart, which promised a wonderful setting after a tricky approach (lots of rocks and hazards to avoid).

Our route would take us north up the Sound of Mull, and then hanging right at the open water to round Ardnamurchan. Well, whatever way we turned on the whole of the journey, the wind direction sat squarely on the nose!  Unbelievable. 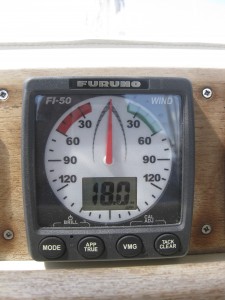 We motored up alongside Mull, as it would have meant lots of tacking to beat into the wind, and the batteries needed charging anyway.  It was also a day when we continually plugged against the tide too – only a knot or so, but still!  The good thing was that it was sunny!  Not exactly warm because we were going into the wind, which meant that we were in foulies.  All the boats we passed were coming south – we didn’t see a single boat going north – so we were beginning to wonder what they knew that we didn’t! 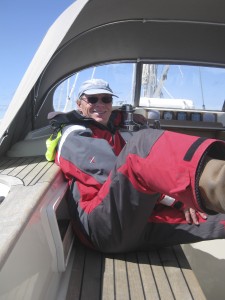 Pete relaxing ‘off watch’ in the sun…

Pete was really pleased to round Ardnamurchan, which had been a bit landmark event for him… and we’d done it weeks after he’d originally imagined too I think.  Ah well.  With the open sea, we decided to hoist our sails and sail when we could.  This was about four hours after we’d set off.  It’s so much more fun when we sail than motor (most of the time), and this wind, a force 4, is really perfect for Whinchat.  Her speed is much quicker than under engine, and she rides the seas much better.  Helming is enjoyable – more so than ‘driving’ under engine… which we generally delegate to Doris.

We saw our first puffin!  Only one, and Pete spotted it, but it was very exciting… it fluttered away out of the water.  We were on the look for minkie whales, or even dolphins – neither of those showed up.

At 17:00 we were approaching the entrance to Loch Moidart, which is described in detail in the pilot book – until you come to try and translate that to the landscape, when every little rock or islet looks the same!  It was very stressful.  I was on deck with the binoculars trying to spot and distinguish rocks, with the pilot book in one hand.  It was certainly a navigation where you have to hold your nerve, as you come very close to some of the rocks in order to avoid the ones that are hidden! 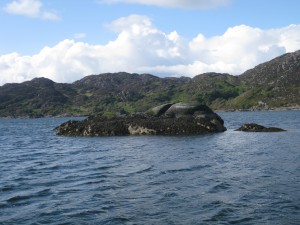 When we finally rounded the headland (which was invisible until we were almost upon it), the water opened up… it was utterly breathtaking.  Three other boats at anchor, and we were concerned not to anchor on top of them, so we decided to be brave and cross the bar (in theory you can cross at all times except low water, springs) but what did that mean?  The depth meter dropped to about 3.0m, which is what it meant.  We couldn’t find shallow enough water to anchor in tucked in behind a wee island – there were mooring buoys where we were expecting to be able to anchor, so we decided to head back out to where the other boats were.  We dropped anchor just outside them, in about 4m of water (only 20m of chain needed) and our anchor set well.  It was 19:10, so it had taken us a little over two hours after entering the loch, and it had been a mighty testing couple of hours!  Just as we were tidying up the boat, a guy was approaching us in his little dinghy.  I was ready to receive a lecture for mooring so close, but he actually was coming to say that he had taken a photo of us against the castle and would he like us to email it!  Lovely!  It was a lovely gesture, and both of us really needed that moment of kindness after the stress chemicals had been building during the approach!

Loch Moidart was one of Kevin’s recommendations, and it is easy to appreciate.  There is a ruined castle, on another little island, which adds to the atmosphere of the place.  Wonderful. 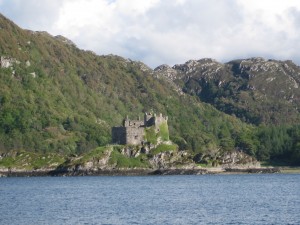 It had been a very good day on the water, and it was somehow finally in one of the types of places that I thought we’d spend more time at.