After a couple of days at home, it was really odd to be back on the boat.  I found it very disorientating to move from one ‘world’ to another, although I have to say it was very nice to sleep in our bed, stand under hot running water (without either switching on and off to conserve water, or wonder about whose feet have showered in the marina facilities before you….)  In a very girly observation, another thing I struggled with, was the full choice of a bulging wardrobe – it’s an easy ‘uniform’ on the boat, which is polo shirt, fleece, trousers, socks (sometimes two pairs) and sailing boots.  At home, well, it was all a bit overwhelming!  Goodness knows what I’ll be like when I have to dress for a black-tie event next week… Anyway.  Back to Whinchat…

Mary had messaged in the morning saying that she would be able to join us for dinner, if we were able to come to Loch Aline.  No contest! Plan formed!  She had realised that she hadn’t actually seen Whinchat, let alone been on board.  Our plan for the week, in theory, was to take us north, so Loch Aline would fit in well.  It wasn’t a short journey, but Pete wanted to get the tides right.  The entrance is narrow, well marked on account of the ferry, but can swoosh at times, and therefore Pete wanted to enter when there was less tidal flow.  It meant an easy start, leaving at 12:30 after taking ‘panda power’ back to the garage.

Our second exit from Dunstaffanage went very well.  Pete had watched a couple of boats leaving, and getting in to trouble, so he’d been thinking about this moment a great deal!  We walked Whinchat back along the pontoon, with me on a very short midship line (the reverse of how we came in), so that the bow didn’t run away with the tide.  Very neatly done, and we were both mighty relieved.

There was no wind when we left, not a breath, and we thought it would be a day of motoring.  Pete noticed some ‘sea’ ahead, which can indicate wind, and sure enough, there was quite a breeze to greet us somewhere out  on the sound.  We raised the yankee and sailed along nicely.  The forecast was for very light winds (3 or less) so we were a bit surprised to have anything.  It was another ‘lazy’ sailing day, as we headed north, and didn’t raise any more sails (it would have meant furling up the yankee to hoist the main and we just didn’t think the short distance would be worth it).  We were overtaken!  That doesn’t happen very often under sail, but we were seriously under-sailed!  When we were in the Sound of Mull, the wind died down, the land mass acting as a massive wind barrier, so we motored for the last few miles.

At the entrance to Loch Aline, the ferry was about to leave, so we hung back to let it out (as the book advises). 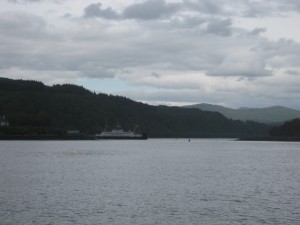 The entrance to Loch Aline, with the ferry leaving.. you have to weave around the channel markers, so not much room!

The loch opens out, and is very pretty (if you overlook the disused sand quarry works), as shown in the picture above.  We were looking for the anchorage inside the mooring buoys, avoiding the ledge off the bay.  We tucked in alongside another yacht, and set our anchor…. 40m chain (with me hoping I had the complex system tapped this time), and our anchor bit first time…. 2000 revs astern and we didn’t budge.  Marvellous.  Later, we watched our neighbours leave and they had a certain amount of trouble raising their anchor – presumably it had fouled on some mooring chains.  We were both hoping that wasn’t the reason that our anchor had set so well!

Pete went to fetch Mary around 6pm, and she spent a few hours with us on board.  It was a really lovely evening, and she was impressed with our living accommodation – presumably very different to the inside of most dive boats that she’s been on!!!  She did book a weekend to come sailing with us, with Michael too, which will be fun.  October, so the weather should just about be the same as now!

The unexpected event of the evening, was that on the day that we had given up (sold) our Take That tickets for Glasgow, Mary asked me to join her in Wembley!  How sweet the synchronicity.  Michael will be working, so I get to go… very exciting!