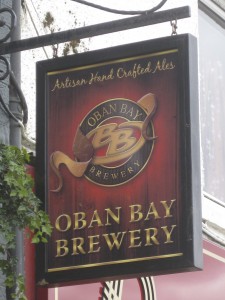 After the miserable day of Friday, we had a ‘come what may’ day.  Up early (06:30) to make the departure time of 08:00, to travel back along the Sound of Mull and into Dunstaffanage.  It was a dry start, something, but rather chilly.  Thankfully the visibility had returned.  Pete said that we would just motor down, whatever the wind (and it was a bit fluky, and directly at us) so that we knew we’d make the deadlines!

The main difference on this passage was the number of waterfalls that were apparent – I can’t believe that we’d missed them on the way up, but it must be as if they’d been ‘turned on at the tap’ because of the very heavy rain the day before.  Some of them were really wonderful – and of course, I didn’t think to bring out the camera!

Our mooring into Dunstaffanage was a master class mooring.  I think we were both a bit apprehensive about it, as we were asked to go back into the same place… starboard alongside mooring.  Pete had debated reversing in (making a port-side-to), but that would have meant a half-mile run up in reverse… We decided that we’d just get on with it.  It was perfect.  Pete stopped close enough for me to jump off (I knew the pontoons were a bit wobbly, so I knew to land hard and low), and I cleated off with the midships line as short as I could get it.  Whinchat was not going anywhere!  Perfect.  We then had to walk her forwards, but it was all as planned and very controlled.  We were both really pleased.

We also were in good time to get into Oban to collect the car and have lunch.  Rather ashamedly, the only picture I seem to have taken today is of the pub sign where we had lunch! And a good lunch it was too!

We have, or rather, Pete has, “Panda Power” for the next few days.  It felt really odd to be travelling ‘at speed’… after weeks of moving at maximum speeds of 9 knots, 30mph was quite a change!  Heaven only knows what being on a plane will feel like!