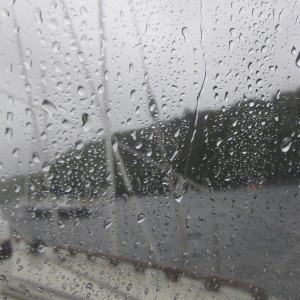 Today was a truly miserable day at sea.  The weather forecast which had promised such benign conditions – enough to have us head out to Coll – completely changed overnight.  Back were the strong wind warnings, and it turns out, some of the poorest visibility that we’ve had over the entire trip… hour after hour of heavy, thick rain falling from very low clouds.  It was a day when plans were shelved, and spirits fell.

Mary has arrived in the area, Loch Aline, about 10 miles from Tobermory, so our plan had been to cruise down to an anchorage there, have dinner with Mary, and then in the morning head onwards to Dunstaffanage so that we could make the hire car deadline etc etc…

Well, we hardly ventured out at all.  None of the forecasts promised any obvious turn in the weather, and Mary confirmed conditions were as bad in Aline – so we stayed put.  So did most of the boats in Tobermory, so it seemed, so that by the end of the day, boats were having to anchor behind the moorings.

Who knows what it would have been like over night, but I didn’t fancy anchoring with strong wind warnings wafting around us.   Better to be safe than sorry, and all that, miserable as it was!