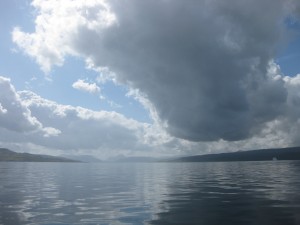 No wind then WSW (force 4-5) with smooth seas then moderate with the Atlantic swell!

We woke to a totally calm start to the day – the loch was totally glassy, and not a breath of wind.  Perfect conditions for an anchorage!  We listened to the weather broadcast, which was for totally benign conditions… and we decided that if there was ever a day to go beyond the Ardnamurchan Peninsula then today was it.  Pete said that I could chose, and was offered a mooring on Coll (which is apparently very sheltered in anything other than a southerly wind, as the swell from the Atlantic rolls in a bit) where we could hire bikes at the hotel and then cycle over to the western sandy beaches, or to head to Loch Moidart (which was one of Kevin’s recommendations) to an apparently very beautiful anchorage.  I couldn’t decide, so Pete said that the point of decision would come at a waypoint alongside the point at Ardnamurchan…

But first the upping of the anchor, which went without incident.  Sort of!  Pete wanted to see his system of marking the anchor chain, which he’d completed when Whinchat was still on the hard at Rustler in early May – marking with yellow cable ties the 10m intervals… I was confused at the time, and told him to write it down (he didn’t). Well, when the anchor came up (all winches working properly), instead of the 50m of chain that he wanted out, there was 30m (marked by 6 yellows, whereas I thought I counted 5, for 50).  Apparently the ‘yellows’ are doubled up for 10, 20, 30 and then possibly go to singles at 40 and 50 and 60? (no idea how much chain we have out).  Not exactly a straight forward system – and anything that has blue in it marks a ‘5m’ interval.  It requires observing as the chain goes down, but when it chunters away, quite frankly it’s tricky to count if there are anything over about 4 tags (clearly).  I was also very stressed out when it went down for the third (or was it forth time) the day before so I wouldn’t have trusted my judgement very much anyway.  Whatever the reason, we didn’t have enough chain out, but we were all good.  The anchor had dug in (evidenced for the first time) as the ‘nose’ of the anchor was buried in thick mud.   Must do better next time!

We motored out as there was no wind, and when we got to the stated waypoint, and my suggestion was to go north to Moidart (thinking that Pete really wanted to say that he’d rounded Ardnamurchan), but Pete was up for visiting Coll – and having a different kind of day with the bikes, exploring (which is more of what we had in mind when we were back in Sussex thinking about our trip many moons ago).  The wind had arrived (a bit unexpectedly) and was WSW, so Pete reckoned it would be enough to provide good shelter on the mooring.  Neither of us had really expected to sail, but there was a good breeze, so we decided to go for it, even though it was into wind!  We hoisted the mainsail, but we couldn’t get the mainsail to set properly – the bottom kept on slipping, meaning that it wasn’t tight against the mast, but gaping.  This would mean that wind would spill, and potentially put strain on the sail in the wrong place, so we put in a reef.  The wind was blowing force 5 at this time, so not unreasonable anyway – but not enough when the wind dropped a bit later.  The sea was a bit lively, more than we’ve experienced in a long time!  Mind you, there’s no land along the Passage of Tiree (the sea area) between where we were and America (well, perhaps not) but there’s not much land, so we were getting the full force of the Atlantic… and there was quite a swell, a couple of metres, meaning that we were crunching through swell and waves.  Sea legs effective!

We were approaching Coll, and looking for a green can marking safe water – not exactly easy to spot in the moderate seas!  We did spot it eventually, and took down the sails, so that we could enter the little harbour.  Firstly, the sea did decrease, so that the mooring would have been a bit sheltered, but it was still a little roly.  I couldn’t see where the mooring buoys should be, so I checked the pilot book, and the 7 visitor mooring buoys should have been exactly where we were!  Not one left, not even a lobster pot!  There was also an anchorage marked, but there was a boat in the bay.  I said to Pete that we should turn around and head away – we didn’t know what was still on the sea bed (it could have been fouled with mooring chains, and you don’t want to get your anchor tangled up in a mooring chain, believe me – it has happened to us a couple of times in Greece) and I wasn’t happy about anchoring in a potentially uncomfortable place – what happened if there was more ‘south’ in the conditions… I didn’t fancy two metre swells through the night. 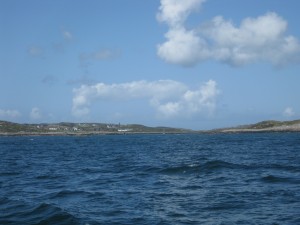 The barren isle of Coll – with no mooring here!

It wasn’t supposed to happen this way!  I was really looking forward to biking around the island (you can see that it’s pretty flat) with the sun shining the western shore of the isle would have resembled something from the Caribbean (except the water temperature).

It was an about turn for us – I made lunch as Pete held us in the shelter that the harbour offered, and then we set the yankee to take us back across the way that we’d come.  I called in the ‘my choice’ for the day, and called for Tobermory… all of about 6 miles from where we’d started in the loch, which was now a 40 mile day.  Still, neither of us had expected to sail and we had the sun with us most of the day (still in foulie trousers, in case you’re imagining us basking in warm sunshine).  This was a lazy sail, as we ended with the wind across the beam, a reach, rather than the run we were expecting, but we didn’t raise the mainsail… we could have got to Tobermory an hour earlier than we did, but it was nice to be sailing.  The swell from the Atlantic is a kinder motion when it’s from behind, more roly than ‘crunching’ (as I described above).  We watched Black Watch leaving Tobermory, presumably its passengers having richly spread their tourist dollars in the cutesy shops. 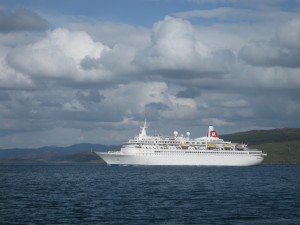 Black Watch leaving Tobermory, just as we were approaching (it’s enormous, it’s width twice as long as our length).  In the photo at the top of the page, you might be able to make out a white ‘blob’ on the very right hand shoreline of the image – that’ll be the Black Watch at anchor…

We selected a mooring buoy close to the landing pontoon in Tobermory Harbour, which we executed perfectly.  It gave us a great view of the boats coming into moor on the pontoons… for some reason, it’s been the aim of most people to moor alongside.  Pontoon rage!  As Pete says, it’s like watching cars looking for the last parking space in a crowded car park.  It’s not as if there are no moorings to be had – about eight when we arrived.

I said that I’d buy Pete dinner, so booked a table at the Water’s Edge Restaurant at the Tobermory Hotel.. well, what a wonderful feast!  All locally sourced food.  The smoked fish starters from the fish shop that we’d visited (the one we found on the second yomp up the hill), my langoustines (how messy did I get?) from around the bay, Pete’s halibut from the same fish supplier and our somewhat strong cheeses from local producers as our ‘after’.  Most excellent.

Not the day that either of us had in mind, but that’s turning out to be the theme of the trip – or perhaps I should remember that such is life at sea!