What a terrible night on the mooring!  So much for being snug and safe on a mooring buoy.  Actually, we were safe, just not very snug.  It was a very creaky buoy (the metal fixing on the top of the buoy sounded like it needed a good oiling, not that this would have fixed it, but that’s the sound that it made), but when the wind increased overnight, the noises amplified… with that adding to the sound of the wind whistling and howling, neither of us slept very well.  The motion also got to me in the fore peak, a slight bouncing up and down, so I decamped to the saloon about 03:00, with Pete deciding to ride it out.  At 05:30, Pete got up to investigate a new noise, a distinct knocking on the hull.  The tide had shifted, and presumably was struggling against the wind to move us through the water, so that the mooring buoy itself was rubbing against our hull.  I slept through my alarm at 07:30, with neither of us very much in the mood for getting up.  I got up to hear the 08:10 VHF broadcast weather forecast, which suggest that the wind force has been decreased around us (no strong wind warnings any more).  The winds that had blown over night had died away, leaving only the damp and dreary conditions of the warm sector following the warm front.  Neither of us were very sparky, and both not certain of where we should head for the day.  I have felt decidedly under par all day, which is why I think Pete set us up for coming only a short way, to Loch Droma Buidhe, a little loch ‘off’ Loch Sunart.  He had an idea that we might just lunch here, and then move on, but we’ve stayed.

The wind was ‘wrong’ and so we had decided to motor out of the loch.  It was really dreary weather, so Doris was doing much of the work, with either one of us supervising… under ‘nav’ mode, she has a tendency to cut the corners when making a change of direction at a way point.  The loch took on a different characteristic in the gloom of low clouds – very moody, in many ways matching how I felt! 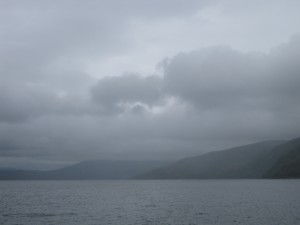 Sitting in the warm sector of the low!

The entrance to the loch was a real challenge – Pete didn’t trust Doris, so I was on the helm.  It was a real hold your breath moment, because we had to hold a course very close to the northern coast of the loch in order to avoid a submerged rock… it was a bit of an ‘eek’!  We made it through, where the loch opens up considerably.  We are tucked behind an island called Oronsay and the mainland – they are joined at low tide, so probably not technically an island at all!

The loch only has anchoring, so this was a time to boost my anchor nerves… Gulp!  Well, they were severely tested.  The area that Pete was hoping for was occupied by a yacht, so we had to edge a little further along (making sure to keep a wide berth of the fish farms).  He motored around for a good while looking for a good depth to drop the anchor…. Well, it took three attempts before we were confident that our anchor had held.  On the first go, I pushed the ‘anchor down’ button and nothing happened.  The winch going around, but it wasn’t purchasing on the chain.  Pete had to come forward and he reminded me about the little red switch (I think I’ve come across this before…. need not to be a Dory Fish about it!).  So, I am driving when Pete sorts it out… so we have to circle round and come in again.  The chain goes down OK, but the anchor doesn’t hold…. we are visibly moving backwards when the anchor should be holding us, so I have to bring it up and start again… Pete circles around and this time the ‘anchor down’ button works just fine – but then the chain goes into free fall, and all I can see is metre after metre of chain tumbling out of the winch.  I have my foot nowhere near the button.  I frantically jump on the ‘up’ button – nothing.  I am now jumping up and down trying to signal to Pete that there is a MAJOR problem, as I have no idea how to stop it, or how much chain there is, or what’s on the end to stop the whole damn lot disappearing on to the sea bed.  I call for him to bring the winch handle, and stamp on the red switch that Pete had activated… which brings the chain to a grinding halt.  I have no idea why I thought to do that – actually, I don’t think it was thought at all – just the desperate actions of a very stressed anchor wench!  I was shaking when Pete came forward, and could have burst into tears….  Pete tightened the winch with the handle, it had come loose, and therefore this now needs to be added as a check when the anchor hasn’t been used in a while… that is, if we want to avoid that particular nightmare happening again!

Third time lucky, which may have had something to do with the amount of praying that I was doing!  50m of chain deployed, and then Pete drove astern, and boing!  The anchor chained snapped (not literally!) taut… and we didn’t move backwards. Phew!  I took a note of the coordinates of our set location, which haven’t changed all day (I am very happy to report).  We had some lunch, and then I had a minor snooze…  Neither of us actually said anything, but we have been here all day.  This afternoon we went out in the dinghy and circumnavigated the loch, which took a good hour or so.  It was really lovely, just chugging around, sometimes paddling if there was too much seaweed.  We didn’t see any sea otters, but a heron, a couple of pairs of noisy oyster catchers and numerous gulls.  I’m not sure that we’ll actually see sea otters, but there’s no harm in looking!

When we came back, the sky was clearing, so we spent a very pleasant hour or so in the cockpit sitting in the sun (still with fleeces, in case you’re thinking it was too warm)!  Let’s hope this very calm weather holds overnight (it is due to) and gives us both a chance to rest well…. 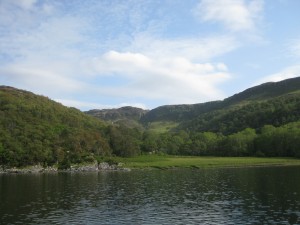 View onshore from the anchorage, when the sun came out!