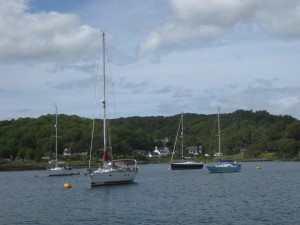 We woke having a new weather system featuring in the shipping forecast, bringing southerly winds our way – strong wind warnings, lively seas, all that threatening stuff which makes planning difficult.  We have to be back in Dunstaffanage on Saturday (to pick up my hire car), so we’ve only got a four day window.  Pete really really wants to get around Ardnamurchan, apparently the most westerly point of the British Isles, but the unsettled weather is conspiring against us.  I simply have to fly home on Sunday.  We will get one more go to get to somewhere like Skye, or the Small Isles when I get back, but suddenly time seems to be evading us.  I am so reluctant to get the wrong side of somewhere.   When we were heading for bed, Pete had marked Coll as our target for today – but the “E” in the forecast makes it untenable as a place to anchor.  Back to the drawing board… again!  I think that it’s really frustrating him, as the places we’re choosing are ‘safe’ rather than adventurous or more isolated.  What can you do?  We have to rely on the weather forecasts, but it’s annoying when they don’t get it right.  Another deepening low is approaching the West of Ireland – which may track our way, or it may not.  Only history will tell us, but for now, we take the prudent approach.

I have anchor-wariness!  I don’t exactly trust it when there are high winds forecast, and today it’s forecast to kick up this evening.  Not that there was much evidence of it in the morning.  Pete went ashore to pick up a couple of things from the chandlery, and the guy there said today was going to be the best in the coming days.  Yep, he’s seen the same forecast, and I have to say, that based on the synoptics we saw this morning online, I’d have to agree with him… a day to make the most of the sunshine!

We slipped our mooring at around 11:00, with the ‘safe’ Loch Sunart in mind… all of 12 miles away, across the Sound of Mull and then keep going.  I’d phoned and booked a mooring, so I knew that we had somewhere secure as our place of refuge.  The wind was forecast to be W (backing SE, before veering with the warm front to the S).  We had mostly a westerly, so it was a gibing sail along the loch! 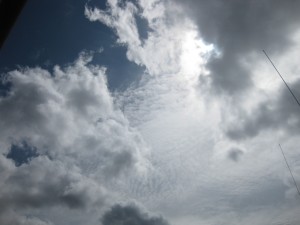 Cloud changes signifying the imminent arrival of the warm front…

The wind never really got going all day, just about averaging a ‘3’, which was enough to ghost us along at around 3 knots.  Pete was doing the helming most of the time; I just don’t hold the patience for the gentle drift!  It was a more active sailing day for me, as the course along the loch was a weaving one – around headlands and obstacles (such as rocks), so I was winch-wench!  That and hauling in the mainsail before we gibed.  I did the log entries, for a change, which was also good.

Our plan was to stop in a wee bay for lunch, anchoring.   However, it wasn’t a great location.  There was a small fish farm, a couple of mooring buoys, more isolated rocks than described and some guys diving (presumably for scallops).  We attempted to moor on one of the buoys, but I couldn’t lift the mooring chain, so that didn’t feel right.  We decided to abandon that one and head on up towards Salen.  We arrived about 4o’clock, having had a good sail, and lots of sunshine!  Pete was, for once, not in his foulies and I was in a t-shirt… I think that was summer!!

We decided to go ashore and check out the hotel restaurant, Pete saying he’d row me ashore.  Well, that was quite funny.  The stopper on the bottom of our mooring ladder has vanished, meaning it’s just metal (banging the boat) so Pete had bought a couple of rubber bungs… only he dropped one in the water, so there was a rapid ‘bung overboard’ rescue mounted, with Pete going after it with only one paddle, making his return quite hard work! 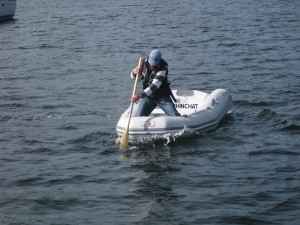 We had a beer in the hotel, and then decided that we’d eat on board.  There’s a bag of salad with my name on it for one!  And another, rain is forecast for this evening, along with the winds, so coming back in the dinghy later wasn’t sounding like such a good proposition…. and we know what’s on the way, with this warm front looming at the very least!