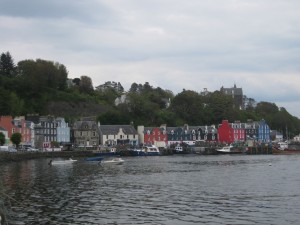 The weather forecast issued suggested that a deep low was going to arrive later in the day, and therefore I was all for making sure that we were either alongside a pontoon or on a mooring buoy – not at anchor.  Tobermory gave the best promise of both, and we thought it would be a good sail up the Sound of Mull – and with the tides with us, we might scoot up to the northern end of Mull….

Leaving Dunstaffanage was pretty stressful.  The Finnish boat next to us cast off first, and got fouled by the tide, so that they’ve marked Whinchat’s stern (it should buff out).  Pete was furious, as the skipper just roared off shrugging his shoulders when Pete complained… Not the best start to the day.  When we came to leave, we didn’t exactly make a great job of it.  Fortunately our dinghy tied to the stern made an excellent massive fender, keeping us off the alongside boat.  The tide got us in the same was as the Finns… No damage done.  We were heading to the fuel bay, so we got to try again…. All very smoothly, with no marina boys to help!  It was near perfect, with me laying the lines correctly for the tide.  We had to wait for ages for someone to pitch up, and when the wee lad did, he managed to create a diesel fountain, which meant that I had a job to scrub it off the deck – I haven’t done a great job, and need to tackle that before too long.

When we eventually got going, well, the winds hadn’t arrived! It was sunny though, so I was in just a fleece most of the day! We motored a great deal of the day, which was disappointing.  Pete had us on a course which would take us close to Duart Castle, on Mull, which looks wonderful.  Another one I’d like to have gone to see, and won’t get the chance to. 🙁 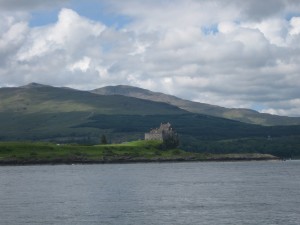 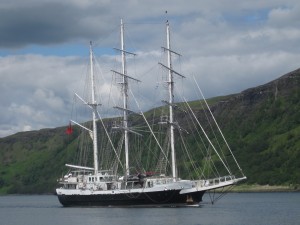 Passing by the Lord Nelson (a fake old boat with its furling sails)!

We did sail for about an hour, under the yankee, with Pete multitasking fishing and sailing, so I did the log checks for a change.  We were drifting along about 3-4 knots, so not exactly the tidal swoosh that I was expecting!  When I came to the helm, and saw that we were doing less than 3 knots, I overruled the sailing and put the engine on.  I could see Tobermory and wanted to get moored up.

I’d spoken to Tobermory Harbour Authority earlier in the day about a pontoon; you can’t book them but they were very helpful.  In the end we decided to opt for a mooring buoy, which was a good choice.  We tied up on the furthest one, near the shore and a pretty little waterfall.  No dramas in the recovery of the mooring strop, phew!  Mind you, there wasn’t exactly much wind to challenge us with!

We put the boat tent up and deployed the dinghy to take us ashore.  We’ve decided to spend two nights here, given the forecast, and even if the winds don’t arrive, then it will be a good place to spend some time.

We went ashore, to check out the things to do (another distillery!) and have discovered a good local coop – green vegetables and salad are the things we’re missing out on!  We sat outside and had a couple of beers, local brews, which seemed a very civilised thing to do.

Dinner on board, waiting for the winds to arrive….