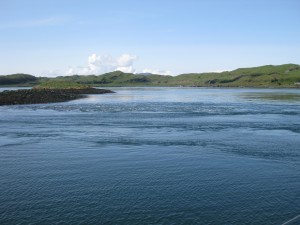 The picture above shows Cuan Sound with the pull of the tides on what was glassy smooth waters… see how it swirls, bubbles with random waves appearing..

The weather forecast was for very little winds and what the met office described as ‘fair’ (they never say sunny on the marine weather, not really relevant detail to sailors, apparently)!  However, this didn’t trouble us, because we had a navigational challenge to tackle, via Cuan Sound, which meant that we weren’t attempting to sail.  We would have to weave our way through some islands, avoiding hidden rocks and tidal complications!  Pete was driving through this passage, and I was spotter (also looking for sea otters and other interesting wildlife as we were quite close to land).  It was really exciting!  Pete was a kind of mix of nerves and excitement about tackling it!  The most challenging part was around a rock, Cleit Rock, marked… but this is where the tide really came to life.  Pete said it was like driving a canoe as he steered Whinchat through the slalom that was the tidal pulls.  He was grinning very widely, being very satisfied that he’d done it. 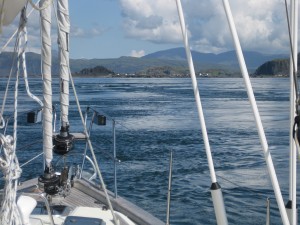 Coming through the slalom course….

As we made for open water, I saw some dolphins!  Not the sea otter I’d hoped to see, but it was a lovely sight.  They must have been fishing, as they weren’t much interested in us at all… a fleeting glance of them.  There was enough wind to have a drifting sail, so we deployed the yankee and the staysail to allow us to downwind drift along the Firth of Lorn (with Mull on our left and mainland on our right).  Pete tried fishing, but at 3-4 knots, we were probably going too fast to fish.  He didn’t catch anything.

We’d hoped to try and recreate the leak, but this point of sail wasn’t allowing us to heel over, so I suggested we sail off course and try and get Whinchat leaning into the sea…. Mainsail up, and off we went into the wind, nicely leaning over (although not getting any water down the decks, as we’ve had before).  Pete was down below, pulling up boards and searching for water flowing where it shouldn’t be…. and there was nothing!   We reverted back to course, and set back for Dunstaffanage, ending up with a lovely broad reach (where the wind comes across the stern at about “5 o’clock”, if noon is where the bow is pointing).  Pete sailed the last part of the day, and after a minor disagreement of where the entrance to Dunstaffanage Marina was, we were ready to moor up.

When I leave the boat next week for a couple of days, and when we leave so that I can travel to Uganda with Karen, Dunstaffanage is where we plan to leave Whinchat… We wanted to check it out, but had heard good things about it too.  It is a very tidal marina, which gives some mooring challenges, added to by the marina boys who were sent to help us arrive.  In a way am glad they did, as I couldn’t have jumped ashore (starboard tie up is always a bit more tricky), but they had no clues about the lying of lines – they had all of our mooring lines going forward, with the tide, so that nothing (only by us being in gear) holding us against the tide… so helpful and not.  We were all tied up, had some lunch, and were debating what to do next, when there was a knock on the hull – we had been placed in someone’s berth.  Ooops!  We had to move, right to the other end of the marina, which seemed to have a greater effect of tide.  The boys came with us, and again we had the same issues with their lack of knowledge of laying mooring lines.  No worries, all done.

We decided to walk to Dunstaffanage Castle, and visit the impressive sounding local shop.  The castle (which looks really good) was shut and the village shop didn’t live up to its own billing.  A bit disappointing….. and the heavens totally opened so we were getting soaked.  Not our finest hour on shore! 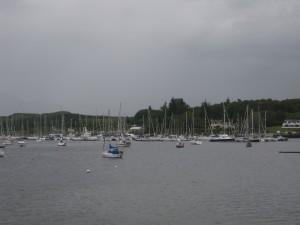 Dunstaffanage Marina in the murky weather….

We had dinner ashore, at The Wide Eyed Frog, which was a super meal.  We went native, Pete having Cullen Skink (a lovely soup) and wild venison with me having local scallops and then haggis (veggie) with neeps and tatties.