There’s not much to report for today, other than it was one of those days when you just tackle jobs.  For Pete that was trying to sort the ‘water’ issue and me that was a whole stack of laundry.

The sun was shining on us, although it was still a bit chilly.  Craobh isn’t very big – there used to be a village shop but that closed in December.  Provisioning here was out!  I think it’s one of the prettiest locations that we’ve stayed at, which might have something to do with the sunshine, but the views over to Mull were wonderful.

Pete spent most of the morning tracing various pipes and looking at valves and seals..  He spoke to Nick and Craig of Rustler, who were totally brilliant – with Tim also on hand.  I really appreciated all of them, as I was clearly totally useless (I’d given up making ‘helpful‘ suggestions).  Rustler offered to send an engineer from Ardfern to help out, if we needed it.  Pete felt totally frustrated, because everything he checked seemed to be in order.  No evidence of water leaking where it shouldn’t.   This didn’t really settle him, because he’s still no idea where the water came from or whether it will happen again. He couldn’t find anything to fix!  Grrrrrr…..  We will now add in water inspection checks when we sail. 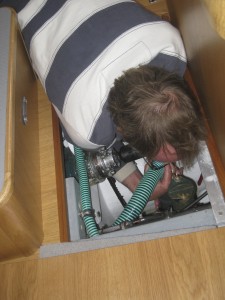 Me, well, I bravely tackled another washing machine!  It was the same make as I’d managed to wreck in Ardfern, so I was a little nervous.  It all worked OK.  The tumble dryers were useless, and I must have chucked about £10.00 in coins to try and get things aired.  I gave up, and turned Whinchat into something resembling a Chinese laundry – thank goodness for shore power so that we could use the fan heater.  Things eventually dried out. 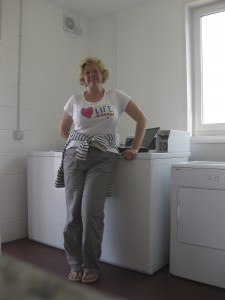 After lunch we decided that we’d walk to Ardfern, and visit their excellent village shop.  It was a 6 mile round trip, but was a glorious walk.  We had to walk up the hills behind Craobh and then back down to Ardfern, with the reverse on the way home (with me carrying the backpack full of food).  It was a great leg stretch, and we really enjoyed it. 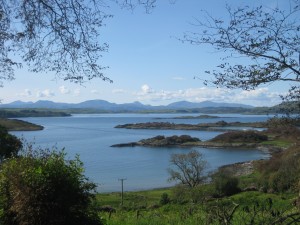 Views out towards Mull, on the walk from Ardfern…

One final thing of note, in that we were given truly wonderful views of the setting sun.  Something we haven’t seen much of!  I took the photo below about 23:15.  Amazing. 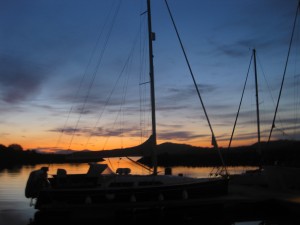