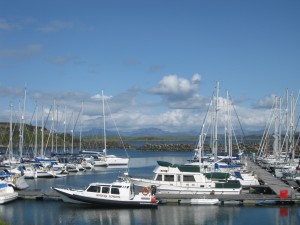 It was a very odd mix of things yesterday on the water.  A day that you couldn’t have scripted, really.  Our plan was to go to an anchorage – with a very long and unpronounceable name… Puilladobhrain said, ‘Puldohran’.  In order to do this, we had to make the right passage through the tidal gate at Dorus Moor…. so, working backwards we had to leave our mooring at 06:00, but I also wanted to listen to the updated forecast, at 05:10, so alarms needed at 04:55.  The wind was predicted to pick up overnight, which it did.  Howling down the mountain side, which gave me a pretty rubbish sleep.  It didn’t seem to bother Pete very much… snoring away (quieter than the wind was, so he wasn’t the trouble of my lack of sleep).  I woke about 05:30, realising that both of our alarm clocks had failed… phone batteries dead.  We’d missed the weather broadcast, so I was up for not setting off… and anyway, it was totally chucking it down.  We both turned over and went back to sleep.

When we eventually woke, we were trying to decide what ‘plan b’ might be.  By then we’d heard the 08:10 weather broadcast, and despite gale warnings rattling around Bailey and Fair Isle, the forecast for us was better, but the wind and rain were still bashing us.

We eventually decided we’d head to Craobh Marina, a shorter distance from the planned anchorage, but still dependent on a tidal gate.  We’d need to pass through the gate (to get the favourable tide) after 17:00, so leaving around 13:30. We wanted to do a timed pack up of the boat, so we needed to be ready to leap into action at 13:00.  The squally showers were hammering us, and I was a bit reluctant to set off, but as the morning passed, the number of blue sky moments between the showers was increasing, so I reckoned that as long as we didn’t leave in a squall we’d be good to go.  Our exit off the mooring buoy was good, and of course the wind got up at the time we were casting off.  It was the first time that I’d released us using the ‘mooring duck’ which worked very well.  We were on our way.

The mainsail was deployed for the first time in a week or so, probably since we sailed up from Campbeltown to East Tarbet… it still worked!  However, because of all the rain that we’ve been experiencing, the stack-pack was full of water, giving an additional shower when we raised the sail.  A design feature that needs some work!

I had the first helm, and we set off at a rate of knots, under a predominantly westerly flow, a lovely beam reach – a point of sail that’s fun to helm and generally you’re travelling at pleasing speeds.  We were cruising along at 7-8 knots through the air, but slower through the water as we were pulling an adverse tide up the Sound of Jura.  We hadn’t even passed the end of Craighouse, when the wind totally died.  It backed south, meaning that the wind was behind us, so it’s my most stressy point of sail… risk of accidentally gibing high, which I did… fortunately with almost no wind, there’s no risk.  Pete was down below, and I was shouting down, “We’re now going at 1.2 knots…. I think we’re going backwards… I want to put the engine on….” No response.  When he appeared, he said that the forward grey water pump (for taking water from the sink in the forward heads) was running constantly and he was worried that it was going to burn out.  He was pretty stressed about this, and nothing he could do would make it deactivate.  Pete hauled in the yankee, and we motored for all of five minutes, when wooosh… Hello!  The wind was back from the west, again, blowing nicely.  Yankee redeployed and me helming.  The sun had also come out, we finally seem to have shaken the showers, so I was down to my fleece hat (rain hood gone). 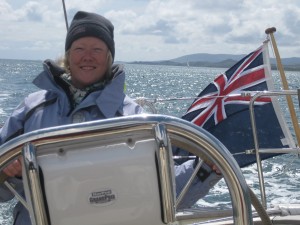 Pete went down below to do the hourly position report for the log, and he didn’t emerge for some time.  I’m not sure how long I was in my own little sailing world, musing that if the alarms had gone off, we’d have sailed in miserable rain and winds, and here I was having just about the best sail of the trip (the one alongside Arran also being stiff competition).  I heard a cry from down below… “There’s a lot of water in the boat…” I learned more about this later, when we were tied up, as Pete was incredibly stressed and very ‘closed’.  His face was set in anguish for the rest of the sail, about 4-5 hours until we got to our destination.  How did he spot trouble – our mat at bottom of the ladder was wet.  For those with a sharp intake of breath at the thought of water in the boat (Mother), then a bit is to be expected… after all the outlets are all under the water line, but there are mechanisms to prevent sea water cycling, and we have an automatic bilge pump which sends the water on its way when it reaches the float level.  The bilge pump hadn’t kicked in, which was one problem, but Pete had applied a manual override which had taken a whole amount of water from under the boards.   However, he discovered that water was under the seats on the starboard side of the boat – which makes sense.  We were on a port tack, which means that the starboard side of the boat is lower, and gravity will do the job of pulling all the water sloshing around to the lowest point on the boat.  I could see him pulling all the cushions up through the companion way, and I felt absolutely powerless.  Pete reassured me that my job was to carry on helming so that we could reach our destination.  He came up to get a bucket, and scooped out three or four filled buckets with sea water.  This was an alarming sight to me.  He reckons that there were 20-30 gallons of sea water in the bottom of Whinchat.  The question is, where did it come from?  This was the main worry on his mind.   I tried to cheer him up, making suggestions of what it might be.  I didn’t realise it was sea water, so I was musing about the shower, the sink (it doesn’t drain well), or whether there was a hole in the hull (a joke that didn’t go down well).  I also mused that the Universe had conspired to make our alarms fail so that we would head to a marina (where at least you can check things). All I got back was this steely glare, which wasn’t at me (I knew that), but it was all that my poor stressed skipper could do.  Out of the six hours on the water, I reckon I helmed somewhere between 4-5 hours, which I really enjoyed, but it was tainted by the worry of the waters.

The tidal gate, well, we were expecting to have one of those surges which would swoop us through… that didn’t happen, but it was with us.  We kind of crabbed our way through, as there were strong eddies and confused bits of sea.  We watched a boat coming the other way, and he was barely moving, so we knew at least we had what there was with us.

The sight of the marina was a great comfort to both of us, and I fully subscribe to the view that the Universe was looking out for us today.  I had booked a berth in the morning, and C28 was vacant, with a couple of people who came out to take our lines.  I love it when that happens!

I’d texted our friend Tim for some bright ideas, and he came back with a cracking list.  I knew that I was of no use to Pete, and thought if he could have someone to bounce ideas around with, it might help.  Tim and Pete spoke (thank goodness we are in a place with an adequate vodaphone signal) when I went and checked us in.  The marina has a reasonable chandlery and a good engineer, apparently.

Pete texted Craig, Rustler’s engineer, who pretty much immediately phoned back.  We were both very impressed.  Craig gave Pete a few things to check out, and thought the most likely cause was syphoning back of water – which could be fairly tricky to trace.  That task was for Friday.

We opened the bottle of Jura, it had been one of those mixed days, but the warmth from the blend was a very comforting way to end the day… 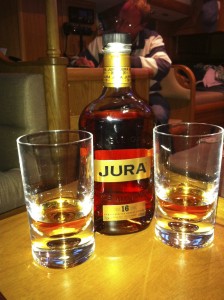