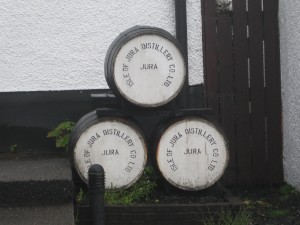 We weren’t able to get a weather forecast last night, but got one this morning (how bizarre).  Guess what?  Gale warnings in the sea areas, with strong wind warnings in the inshore areas.  We decided that it might be a good idea to play safe and look for a mooring in a sheltered place… We struck on Craighouse, on the east coast of Jura (thus offering good protection from any wind with west in it), which promised an abundance of mooring buoys, a shop, a place for lunch and a distillery!  Sounds like a good kind of place for another wet day…. and has it been wet (and cold, for a change).

We needed to catch the southerly tidal stream (it so reminds me of the turtles in Finding Nemo surfing on the currents), so our departure needed to be about 10:00.  Not too shabby!  There was very little wind, and a tidal stream to edge us off the buoy, such a contrast to our arrival the previous day!  I could have almost picked the damn thing out of the water today!  We had an idea it would be a day not to raise the sails, and the lack of wind made that totally apparent.  Pete had Doris doing auto-navigation for most of it, so there wasn’t any need for either of us to stand in the cold.  Actually, it wasn’t as cold as previously (I’m only in one fleece, as an indication, although I am wrapped in a fleece blanket as I write, and I haven’t wanted to take off my sailing boots).

The sea was much smoother than yesterday, with a slight chopping up as we came around the bottom of Jura – wind over tide giving it a dancing air about it….nothing very big, but just a bit choppy.  I’d found a copy of Simon Keeling’s “Weather for Sailors” book in the boat (I’d forgotten I’d bought it), so I was giving myself (and Pete, no choice in the matter) a weather lesson.  We had classic nimbostratus around us!  Some feathering at the bottom, showing us that rain was all around.  And of course, it caught up with us…. just as we were mooring!

The mooring wasn’t quite as disastrous as yesterday, but the rain was untimely… as was the wind that blew up from nowhere (Pete had said that the wind speed had recorded ‘0’ force at one point on the journey).  I could see what I thought to be a mooring strop, which I hooked first time.  I then didn’t attach it well to the boat (for some reason I chose to attach a line through the plastic holder, which won’t really hold 13 tonnes of boat when you stop and think about it). So, I had to quickly deploy the ‘duck’ onto the mooring ring, which I did just fine.  However, that’s not a strong line either, and Pete wanted it tighter than I had it.  As I was releasing the plastic strop in to the water, a gust of wind took us, and Pete had both ends of the rope in his hands, which he couldn’t control.  I’d tied a bowline on one end, which he’d unlooped to cleat off the other end, but the gust had run the line away from him… he was yelling out, so I had to try and haul us so that the bowline could be reattached… nearly a disaster – for no other reason than it could have hurt his hand a great deal!

We put the boat tent up in the pouring rain, and set about making the boat ready so that we could go ashore… and do all the things we wanted to (as listed above).  Lunch ashore was lovely, The Antlers, run by a very friendly couple.  We made a whisky purchase, an unpeated Jura 16 year-old single malt, Diurch’s Own, and then did a reasonable provisioning at the local store – would you believe it they stock the frozen meals range , “Cook”, based in Kent?  (Really good, if you ever come across it, cook from frozen, tastes very homemade).  The rain was lashing down, and neither of us really fancied a walk, so the afternoon has slipped by with the paper and the blog.  It’s curry night on board, with Pete as chef.  Perhaps a wee dram of the malt to end the day… it’s supposed to be good at warding off midges.  Worth a try! 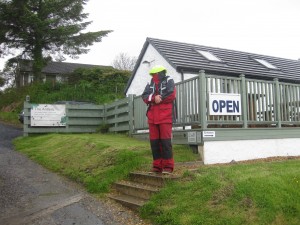