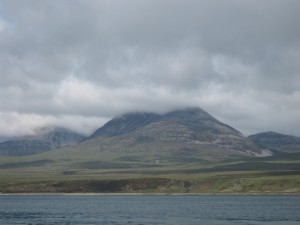 Photo shows the ‘Paps’ on Jura, taken from the mooring

The upping of the anchor was proof that it hadn’t set well.  There was little weed, but lots of gooey black mud, with most of the mud on the ‘roll bar’ of the top of the anchor.  This feature is supposed to mean that when the anchor doesn’t lie point in, then it rolls it so that it does dig in.  I reckon this anchor had ‘dug’ in on its roll bar, and that when the tide changed, it moved with it.  Not sure what we can do about that, except perhaps take better note of the ‘small print’ in the pilot book.

We were greeted by a wind which had switched direction, so yet again we were able to head downwind on the yankee… It was an interesting sail, again with us doing half hour each on the helm, as the cold wind was with us (I had two fleeces on, and my fleece hat).  We scooted out of the loch, with Pete complaining that we were messing up his tidal calculations.

Our passage today would take us back down Loch Sween, across the Sound of Jura, and into the Sound of Islay – this is a narrow channel, with very strong tidal flows and you don’t want to catch it wrong!  Pete had ‘budgeted’ on us doing 5-6 knots, and we were steaming along around 7-8 knots… would we make it to Islay too early?

Pete decided that making the tidal gateway was the most important, so when we started to slow up, he was quite relaxed about it.  He toyed with the idea of putting up some more sails, but we really didn’t need the speed… so again we were ‘lazy’ sailors, using only the yankee to sail along under.  It was not a pleasant sail, really.  The wind was so cold, it was raining quite a lot and the sea was a bit lumpy, sort of roly poly.  We would have moved through the water better with more sail, but we didn’t need the speed, so we chugged a bit across the Sound of Jura… nothing to make us queasy, but I think that’s because our sea legs are pretty good; I think a few weeks ago it would have got to me, but it didn’t.  I think the half hours helms also helped, as it gave us both time to warm up down below before doing another leg. 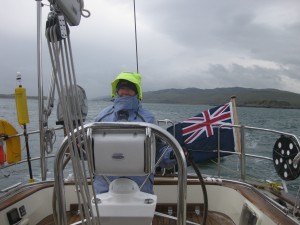 What a difference the tidal flow had when we rounded Jura!  Wow!  We were scooting along, again, at a rate of knots.  The wind had peaked for the day, blowing force 5 behind us, so our speed through the water (with the tide) was around 9 knots.  I wasn’t sure how we would be able to stop, but that’s another story!

We had been invited to use David and Caroline’s mooring, just off the Caol Distillery… we’d hoped to get there before they left Islay, but the winds were drifting ones only.  It was quite a challenging arrival… did I say ‘quite’?  Make that a ‘very’!  The buoy is bright yellow, and unmissable (as Caroline had said), which had been one of the worries.  I could see a mooring strop, so I thought it would be a straightforward pick up and loop on the cleat.  The racing tide would add a level of complication, which Pete said was swirling in all directions (presumably some back eddies off the coastline) and would you believe it, but the heavens absolutely opened, with the most ferocious downpour accompanied by screaming squally winds.  It took me five attempts to get us secured on to the buoy, each time with an increasingly louder scream of frustration, with each time Pete being unable to hold us in the wind/tide, so we’d have to go around and start again.

Firstly, I hooked the strop, only it was so tightly wound around the mooring chain, lashed by seaweed and all manner of stuff, that I couldn’t lift it.  I nearly lost the boat hook in the process.

Secondly, I then tried to jab our special mooring ‘duck’ on to the ring on the top of the buoy, but just couldn’t deploy it.

Thirdly, I tried to lasso the whole buoy, but missed – a couple of times.

Fourthly, I tried to lasso the buoy again, and succeeded to get the rope around it, only with all the seaweed, I clearly couldn’t get the rope under it, so that when I pulled the rope to cleat off, the buoy slipped past…. oh, how very loudly I screamed.

Fifthly, second attempt with the mooring ‘duck’, this time practiced on my finger… so repeating the mantra ‘push forward and release’, I bloody well did it. Oh how very loudly did I whoop with delight.  It made Pete smile!

Next, however, came the task of tying us securely on, which we did with a mooring line and then Pete was despatched in the dinghy to shackle on the mooring strop.  After what felt for hours, we were finally on…. and too late to go and visit the whisky shop!  Bah!

We decided to see if we could try and release the mooring strop, or rather, Pete tried but it’s been so tightly engulfed by sea weeds that it was impossible for us.  A massive jellyfish came along to see what he was up to, at which point, abandoning all attempts seemed like a good idea! 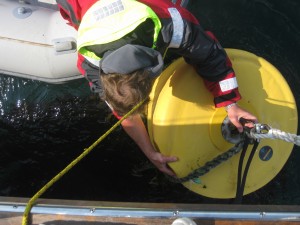 We took our first trip off the boat in a couple of days, taking the dinghy ashore and then walking up and down a hill to get to Port Ashaig – a three mile round trip, and the furthest we’ve walked in ages.  It was a lovely leg stretch, not so nice in full wet weather gear and life jacket, but the beer in the bar made it worthwhile.

At least we knew that we weren’t going anywhere that night, we were so well secured on the mooring buoy. 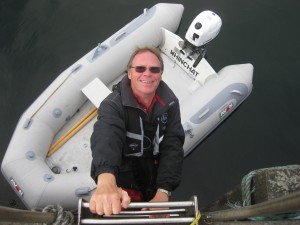 Are you sure I have to climb down there to the dinghy?