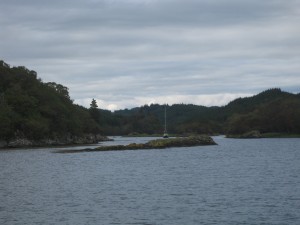 We were fairly certain that when we woke we’d moved on the anchor, not by much and fortunately not much wind.  All would be revealed when we came to leave!  We were leaving at 13:00, so we had a morning on board.  The weather had brightened, so I suggested that Pete deploy the dinghy.  He rowed off and took some pictures of Whinchat on the anchorage (featured in yesterday’s blog).  We’d decided to head for the Fairy Isles, on the Kintyre Peninsula, up a loch called Loch Sween, which meant getting the right tidal stream south.

We’d had a deck pump installed, for the purposes of washing the apparently thick Scottish mud off the anchor as you bring it up (to avoid your lovely teak deck from getting muddy).  I was on anchor duty, but as there was no wind (and we have a strong windlass) Pete came up to have a look at proceedings.  Quite a bit of seaweed, which we picked off, but as the anchor came into view we could see that we’d picked up a lobster pot!  Eeek!  Pete tried to use the boat hook to get it off, but that wasn’t working.  We had to put him in the dinghy and run him along the port side of Whinchat to the anchor, where I lowered it enough for him to be able to tip up the anchor and release the pot back into the water.  No obvious damage done, except a rather mucky dinghy and Pete!  We had to get Pete back on board before we drifted too far… As I said, thankfully not much wind or tide to give us any problems.  Of course as the anchor had lodged on said lobster pot it wasn’t that muddy, except for the very tip.  The deck wash is pretty impressive – what mud there was was blasted off with ease!

It had been a slightly more stressful departure than we’d reckoned on, but another one that we’d managed calmly and collectively.  We were pleased about that.

Our passage was south along the Sound of Jura, and ultimately back north along Loch Sween – our destination as the crow would fly was about 1.5 miles from where we started.  There was no wind to speak of, at first, and what there was came straight on the nose, so we motored down to the mouth of the loch – both of us freezing.  It was a bitterly cold day on the water, with me in two fleeces and my foulie trousers. Pete had his polar fleece on!  Pete knew the navigation was challenging around the headland to take us into Loch Sween, so I also think this was on his mind in the decision to motor – we were trying to get the tidal stream right.

Pete was getting anxious about the navigation.  We had it all plotted out on the chart plotter, but there’s no substitute for following the transits.  We were also placed about 100m out the other day on the passage to Ashraig (at the opening of the Crinnan Canal).  I went and read the pilot books, and was the eyes for the watch… finding the transition lines, and telling Pete to hold his nerve when we were approaching a little island (we had to line up the northern points of two other islands before we could turn in, in order to avoid a drying reef on the headland).  We managed it all very well, and I could sense Pete’s blood pressure falling as we had the ruined castle in view (along with a very ugly, but useful for the purposes of navigation, caravan park).  Great teamwork! Who says that women can’t navigate?

We raised the sails to head up the loch, as the wind was behind us… another drift up on the yankee.  It was a very gentle sail, although it felt cold.  The lows that are around at the moment are brining really cool weather, wet too.  I had about four layers on – t-shirt, long sleeved jumper, down gilet and full wet-weather foulies.  I was still cold!  We were doing half hour helms, so that the other person didn’t get too cold.  Not exactly the summer sailing we had envisioned. However, the landscape was spectacular, the mountains of the mainland visible in the distance… the photograph doesn’t really do it justice, but you get the sense of the magnificence. 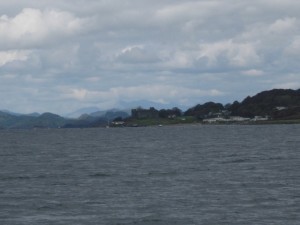 Our destination was a group of islands at the head of the loch, which was a lovely sounding anchorage.  It wasn’t until we got there that I read the ‘small print’ saying that the holding was fair.  There were a couple of boats already in, one being a Clyde Puffer (a steam ship that can go on the canal), so we tucked in right behind a small rocky island.  We deployed the anchor, which was not holding, so we had to raise it and go again.  Second time it really tightly bit in when Pete went astern, so we were both confident about it.

I took some bearings to check our position, which seemed good for the next couple of checks.  Then the tide switched, meaning we were pointing a different direction, where one of my markers disappeared.  Hmmmm.  We seemed to be more or less in the same place!

It would seem that we weren’t in the same place.  When we checked the lat/long position at bed time, we’d moved.  Not a lot, but a bit.  This was confirmed by Pete being convinced we were closer to the shore.  We decided to leave it, as it was deep water with good space.  We went to bed, Pete falling soundly asleep.  After a few broken hours worrying, I got up around 03:00, as the wind had increased.  I thought we’d probably moved some more, but decided there was enough scope, so fell fast asleep.  Pete got up at 05:00, having had the same thoughts as me… and had the same reaction.  When we got up, we checked the coordinates, and we seem to have migrated back towards the place we’d started.  So, for a second night, the anchor seems to have dragged.  Not the best start for the new wonder purchase!