We had a gentle start to the day, with Tim leaving us around 08:30 to head back to Yarmouth… We were so sad!  He’d been great company and a great person to have on a boat.  Hopefully we’ll go sailing with them in July when we leave Whinchat for a couple of weeks.  We were ready to go around 10:00, and slipped out without fuss using a combination of tide and wind.

We decided that it would be a day to drift down on the yankee, given that we weren’t in any rush and we were heading for an anchorage which wasn’t that far away.  Just down past Crinnan on the mainland.  A couple of people we met at the Rustler meet had recommended this as a place to anchor.

We didn’t move very quickly as we sailed down the Sound of Jura, perhaps around 4-5 knots.  Pete had said it was very lazy of us not to raise any more sails!  We saw quite a few other yachts on the water, more than we’d seen on any other day, which perhaps has something to do with the fact that the weather has improved… or at least, the strong winds have abated.  We took it in turns on the helm, with Doris doing most of the work because it was so cold!  When the drizzle arrived after a couple of hours, that was it, neither of us even ventured near the helm!

We were hoping to get in to the anchorage in the northern end of Carsaig Island, which is to the north of Carsaig Bay.  We could see a couple of masts, but weren’t sure if they were in the bay or tucked up behind the island… we are believers of not anchoring on top of somebody. 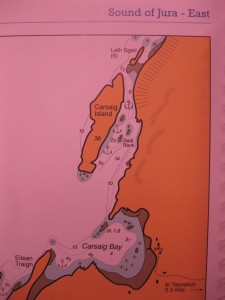 Photo of the pilot book showing our planned anchorage

The passage into the anchorage was a little tricky, quite a narrow gap with a small island (Leth Sgeir) with a long drying reef to its southern end.  Fortunately we arrived at low tide, so we could see it clearly, but it was a ‘hold your breath’ moment as we came past the northern end of Carsaig Island.  The gap between the island and the mainland is about 50 metres at its widest, with a couple of lobster pots marked out.  We deployed the new anchor and I thought we were just lying a bit too much on a narrow part of the channel… so we upped anchor and moved further in behind the island, where it’s wider.  The pilot book was right!  There is mud and a lot of seaweed, mucking up the deck a bit (when we leave, I’ll get to try out the new deckwash solution).  We motored back, and deployed again.  The anchor seemed to have set.  I took some bearings, and set about checking them every half hour or so.

The plan was to have some lunch (I’d bought some potato cakes from the shop in the morning, which were delicious), and then dinghy ashore for a walk (hopefully avoiding the newly discovered hazard of tics!  Pete had been warned about them on Friday night, but also had read a poster about them at Ardfern – gruesome, and potentially carry a nasty virus too), however the weather had other ideas… It began to pour and pour with rain – which is shown on the photograph above.  Grim.  It was one of those days at home when we wouldn’t have ventured very far, so why should we here?  I’d bought the Sunday Times in the morning, as we figured it would keep us going throughout the week.  Ha!  We just about read it all in the afternoon…  Not quite as we’d had planned. 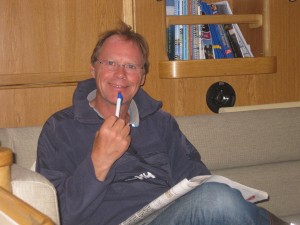 Pete tackles a deadly killer suduko (completes it in 35 mins, vs 54!)

We had a good sleep, unfussed about the anchor overnight.  We’re due to leave at about 12:30 to take the tide south towards another anchorage…

Why couldn’t we have had this weather yesterday too?

We think that we’ve moved back slightly on the anchorage, which the bearings hinted at yesterday, probably by about 60m.  It doesn’t matter here (we’ll confirm that when we come to leave) as there is enough space, but it might do more so next time.  Pete thinks he didn’t bite enough on the anchor astern… the trouble is, Tim and Pete were discussing that the new anchor sets very well, and the issue can be that it digs in too much making recovery difficult…. Nothing is ever straightforward!