We really thought that we should take Tim sailing as he’d come all that way and we hadn’t managed to raise a sail with him on board… but we never quite made it.  I was very sluggish (the effects of yet another late night!) and the lovely weather had vanished, leaving a puff of wind and a cold edge in the air.  We decided to stay in port, and between us concocted a list of jobs to be done.

Mine were to provision, catch up with the blog, go shopping in the chandlery, book flights home and do some laundry… when you throw in lunch too, that’s a decent day ashore.  Tim had asked Pete if there were any boat maintenance jobs on the list, “Not really” Pete had replied…  However, within about 10 minutes of thinking about it, they’d created a list of things to occupy them both, involving multiple trips to the chandlery.  The scratches made by the bush on the canal needed to be buffed out, and after seeing a modification on Peat Smoke (the Thompson’s 44) for the yankee furling line, Pete had commented that the angle to pull in the cockpit made it difficult at times to get purchase… so a pulley was added to the eye which secures the end of the jackstays.  I missed the latter project as I was provisioning in the local shop (very well stocked, with lovely deli meats, smoked salmon and a decent range of fresh meat), but can testify that the addition of the pulley is genius!  The yankee is much easier to pull in!

After I unpacked the shopping, I came on deck to check out what they were doing… They had readjusted all the mooring lines to bring the stern in so that they could buff the hull from the finger pontoon.  It was a hysterical sight, so I just had to dive and retrieve the camera…. 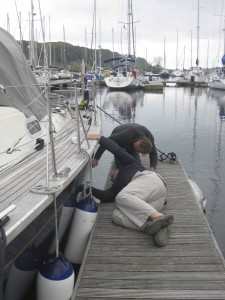 Working hard to remove the damage from the canal… 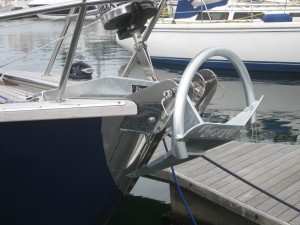 On the return from the chandlers, Pete had a repeated attack of anchor envy (I may have mentioned it when we were in Mylor), as he watched one of the new design by Rocna… Tim has one on Little Dove (his Rustler 44), weighing in at 33kg.  We have a Delta, 20kg, and Pete has often thought that it’s too light, and would prefer to have a 25kg anchor.  He established that they had them in stock (unusual for someone to carry them), so on the way to lunch he was making a proposal for capital expenditure.  I know he’d been thinking about it for ages, so I teased him only a little in asking for justification… So guess what became the project for the afternoon for the guys?  Operation Anchor!

It wasn’t straightforward, as the Delta setting has been custom fitted by Rustler, so would the Rocna fit?  They persuaded the chandlery staff to let them take it down and assess before purchasing, so they relayed it and established that it would fit with a little building up of the teak lashing stand that we have already…. 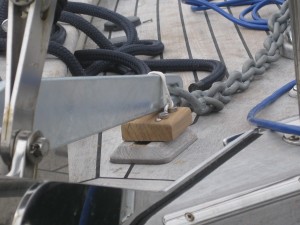 Teak block off the workshop floor, bevelled by Tim

They had a fine old time, and were very satisfied with the jobs that had been created out of a day in port.

Meanwhile, I went to go and do the laundry, in a rather ancient looking top-loading machine (which apparently doesn’t spin well).  All was going well, the washing cycle was finished, and I was using the time to blog.  When I went to push the button to release the door, the button disappeared into the housing.  I tried to push my little finger into the hole where the button had receded into, but couldn’t reach it.  I had nothing to push further, so I went into the office to report the problem.  The guy who came to look at it, was very confused, but saw the problem.  He took his car key and shoved it in the very gap where I’d tried to get my little finger into – with a loud ‘bang’ and a flash of sparks the room went dark and silent.  He was ok, but we were both a bit shocked. I had broken the washing machine! Very dead.  He was very kind and said it wasn’t my fault, but then with everything dead there was a risk that our laundry would be locked in.  An engineer had to come and try and get all the power back on (it had fused the block, including the loos).  He eventually did.  I am pleased to report that after the machine was dissected, my washing was given back to me, and with power restored I was able to dry the clothes.  I had planned on two loads, but having killed the machine, there was no chance of this happening – so I rather cheekily asked for a refund of my tokens, which they honoured.

Tim’s comment was that it was shaping up to be a very expensive day – a new anchor and potentially a bill for a new washing machine! Gulp!  The guys threatened to not let me near anything electrical that day!

Tim was a bit of a superhero for us both as we wound down for the evening.  He has a spreadsheet with data on it about the Nanni engine, which he then scaled to correspond with our engine – to help in the estimation of diesel consumption in the absence of tank gauges!  Genius.  I had also had problems with our wireless aerial receiver, I couldn’t get it to work with the mac…. but guess who fixed it?  Yep, Tim.  This was very pleasing, so hopefully it means I don’t have to balance with one leg in the cockpit anymore when there’s a wireless signal when we tie up.

We’d decided to have a night on board, a la Ramoska!  A delicious baked cheesy sausage/new potato creation.  Marvellous.  The dinner conversation somehow got around to safaris and going to the game reserve…. with Tim showing us a totally stunning collection of photographs taken from his favourite reserve on the edge of Kruger, South Africa.  Pete had eased his anchor envy, but now had a dose of big game envy.  The photographs of a family of cheetahs were just wonderful.  It made me excited about ending my upcoming trip to Uganda with a couple of nights in a game reserve… although I am confident that my photographs will not compare.