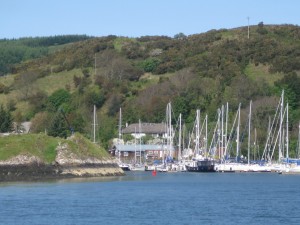 No winds, no seas and gloriously blue skies!

We woke to absolutely cobalt blue skies, the first clear sky that we’d seen in  a long time.  Perfect for finishing the cruise down the canal and then drifting up Loch Craignish towards Ardfern…. only there was no wind, so it was a motor with no hope of sailing.

We were up and ready to leave at 09:00, so that we’d make lunch to meet Nick and Adrian from Rustler.  The remaining locks were all manned, as were the bridges, so it was a less arduous day for all of us – but especially Tim!  The lower part of the canal, Crinnan end was more beautiful than the Ardraig end, so we were increasingly treated to more and more spectacular sights.  The air was so still, which made the water glassy so that the reflections were spectacular… cue more photos! 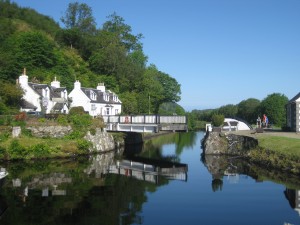 Swing bridge being opened for us… 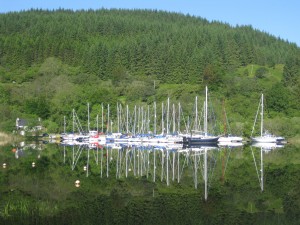 The location of Ballenoch Marina – wonderful!

The remaining passage on the canal passed without incident – more or less –   with the boys on Synergy whistling out to us as we passed their marina… clearly they’d managed to arrive and tie up safely!

I say more or less, because at one point the canal really narrowed, and we had to squeeze past a boat moored up.  The lady on the boat was sunbathing (clearly in her underwear) and was somewhat startled when we came by – very close by.  Both Tim and Pete later said they were only watching the starboard side (of course only to make sure that we didn’t brush the boat tied up….) but I was watching the port side, as we came very close to the bank – close enough to scrape an overhanging shrub.  The branches scratched Whinchat’s aft quarters, which we spotted when we got to Ardfern.  Not bad damage to sustain given all that we’d come through! 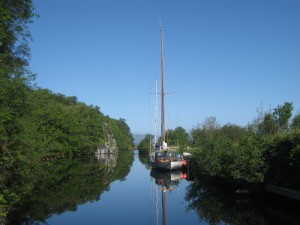 If only all passing places were this wide!

There was something of a traffic jam at the end of the canal, with two locks either side of Crinnan basin.  Two boats were ahead of us going down, and in addition boats were coming up.  We were told it would be a 45 minute wait as they cleared people through.  In the end we went through in a shorter amount of time as the lock guys (very, very friendly) were concerned about the lowering tide in that they might run out of water to get us over the cill – so we were accelerated through (I think).

The last lock was the deepest of them all, I think, and it tested our lines to the limits.  We were tucked in behind a 30ft boat, who didn’t seem to want to hang close to the front lock gates – Tim had to tell him to drive forwards at one point.  We were very close on the back, so Tim constructed a mid-ships line, but he ran out of rope.  The near disaster was that Pete’s stern line got trapped (somehow, due to the vertical drop, I think) and we were in danger of being suspended at the back end, which would have of course snapped the line at some point.  Pete was brilliant in managing to winch it free… he looked mighty relieved.

Once out of the canal, we were in the sea and able to make our way north towards Ardfern.  It was beautiful, the sea as blue as the sky.  Just gorgeous.  The landscape is one that I love, where you can see the outline topography, following the lines of the land without trees.  Tim and I travelled up marvelling at the surrounds, and for the day we had, all the stress and drama (mostly mine, I recognise!) seemed altogether worthwhile.  I would love to keep Whinchat up here for a season one year. 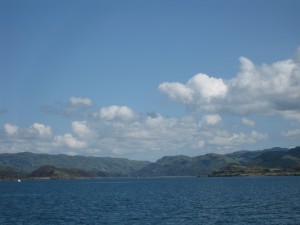 On the way to Ardfern…

Tim spotted a fish eagle, which was an amazing sight.  I followed it through the binoculars as it skimmed across the water and then lifted over the hill, disappearing out of sight.

We made Ardfern by lunch, and executed a less than perfect mooring.  We were all set for portside-to (our preferred) with both Tim and I ready to jump ashore…. Easing nicely, no wind, and then…. drifting sideways towards our neighbour on our starboard side.  Pete called Tim to fend off, the gap to the finger was too great for me to leap onto, so I tried to lasso the cleat… failing.  Fortunately someone wandered over and helped us, not saying a word.  After all the new experiences in the canal, the one thing that we messed up on was a portside mooring!  It was the tide, moving quite significantly, which had interfered with the execution.  No damage done, and we recovered well.

Lunch was at the Crafty Cafe,  highly recommended by the lock guy at Crinnan. We sat in the sun and baked!  All of us ended up with a ruddy hue at the end of the day, a little too much sun, methinks.

The afternoon passed by very easily, I’m not really sure what we did.  Tim had arranged for sponsorship of our ‘racing’ event by Harken, so the first task was to hoist their flag, raise their banner and do some shots of us on board Whinchat.  Then Nick came on board to look at a couple of things, and charge his iphone!

The main event that we’d been aiming for was the dinner of fellow Rustler owners, organised by Tim.  There were 18 of us, quite a gathering!  Remarkably, it was an evening of firsts.  The first time that all the “1” owners were together – Rustler 36-1 (Colin and Jenny), Rustler 42-1 (Pete and Lorraine) and Rustler 44-1 (Tim) What a fun evening!  We met many owners that we’d only seen their names before on Rustler Fleet (the Rustler Owners website).  Tim acted as the host for the evening, and we were asked to seat anywhere except next to your partner!  After the first course the ladies were asked to move.  Great fun, swapping stories of sailing in Scotland and hearing plans for amazing trips.  Pete and Lorraine will set off on a 5-year round the world trip later this summer (via Malta) and David and Caroline set off in August from Islay to complete the Round the World ARC.  Full credit to them! 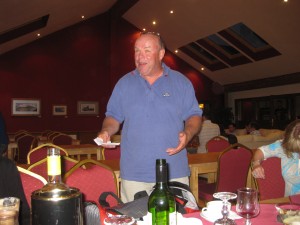 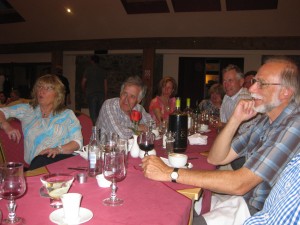 Tim shared out the Harken goodies with a plan in mind.  David and Caroline were given a windscoop (for when they get to the Caribbean).  Gordon was given some one-drop lubricant oil, which Tim had said Nick thought was the prize of the goodies!  After our trip on the canal, we were given a hull protector (a sheet that goes underneath the fenders).

Tim handing out goodies from Harken…

There was one prize left over, for which everyone’s boat name was put into a hat.  It was a neat sailing bag, with a wheelie feature.  Guess who won?  Whinchat!  I was very pleased with our stash from the evening.

I couldn’t believe it when it was 01:00 when we came back to the boat, the evening had flown by, and Pete and I were so pleased to have made it.