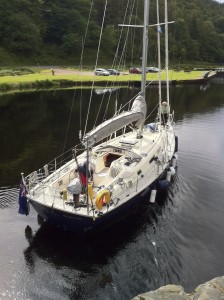 No winds, no seas and brightening skies!

Picture shows the Whinchat on the canal…

Pete put Tim ashore so that he could drive his car around to Ardrishaig (making the recover of the car on his departure easier) and Pete and I didn’t hurry packing up the dinghy and heading over to meet him.  We were set for a totally different day on the water, with 15 locks and 7 bridges along its 8-9 mile course.  The canal was built from 1793-1801, with much of the operating equipment from its time.  They say the minimum time is 5-6 hours, which having done it, would be fairly hard going.

We approached Ardrishaig to see Tim waving on the side, having arrived only a couple of minutes earlier. Quite a relief!  Here we were to go in the first lock, one that was manned.  It was quite stressful, because we didn’t know if we would be port side or starboard in the lock, and I had no real idea about what the ‘line’ etiquette would be.  Fortunately, the lady lock-keeper gave very clear and good direction – and more importantly I threw the line to her and didn’t muff it up!  The trick she told me was to hold it tight, and pull up gradually.  The first eight of the locks would be uphill, so the procedure was the same… throw up the lines (coil a fair amount, split the coil and lob it high and hard) and then hold tight, maintaining the tension as the water levels increase.  The water is eased in to begin with, by only partly opening the sluice gates, as the back eddy as the water crashes off the rear lock gates comes bouncing forwards… If you don’t have a tight hold then the boat goes bouncing wildly around (ours didn’t at all in any of the locks).  Whilst it wasn’t the most strenuous of jobs, it did carry a certain degree of responsibility.  This was my role in all of the locks, with Pete on the stern and Tim being shore boy!  He made most of the ‘running’, both between locks and also in opening and closing the gates and operating the sluices. 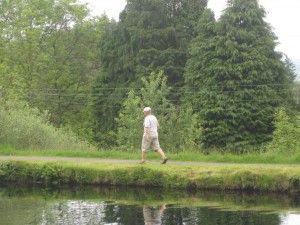 Tim strides out between the locks… 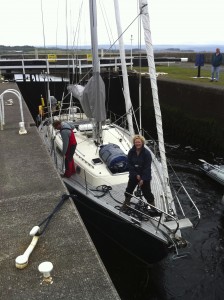 Hold tight, as the water swirls and eddies around…

Our journey through to lock 13 we did in convoy with a yacht called ‘Synergy’, who is based on the canal at Bellanoch Marina.  Two of the crew were the musicians from the Oystercatcher Pub, and admitted to having one too many ‘wee drams’.  “Come through with us,” they said, “and we’ll show you the ropes and we can help each other.”  It would prove to be a category of locking disasters – as the skipper, Roy, said, they only really needed to add man-over-board to complete the set of disasters. 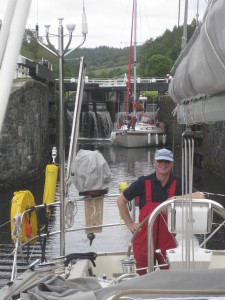 Synergy follows Whinchat into the lock, and Pete is braced for action! 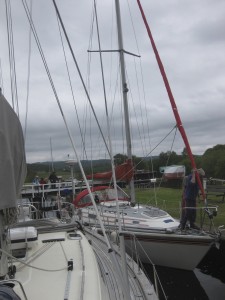 It’s a bit snug in here!

§ Drive into the lock’s wall (twice), the anchor taking a chunk of masonary

§ In throwing the bow line, throw both ends so that the entire line ended up ashore, meaning the bow was trying to mount Whinchat’s stern!

§ Nearly fill their dinghy with the water pouring over the lock gates (on the descent).

§ Less than perfect line control as the locks were filled (on the ascent) so that Synergy rocked and rolled around with the eddies, edging backwards on to us… at this point they were ahead, so we were fending off against their stern.

We couldn’t believe that we were watching this category of disasters unfold around us.  Amazingly, they did no damage to us, and no real damage to themselves other than their pride.  Roy was mortified.

At Lock 13 we left them, as we were directed to tie up for the night on the pontoon after the last lock of the downward lock-ladder.  They had really helped us, their manpower in operating the locks was invaluable, and the banter was great fun. 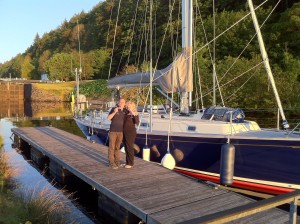 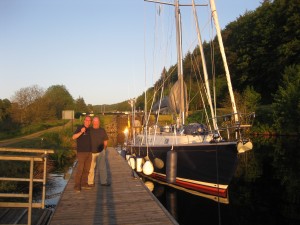 The lock shower was very welcome, and the skies had gradually cleared during the day to bring a beautiful evening for us.  It was a very magical stop… with the only thing to trouble us a small gathering of midges!(update… so many people have recommended the ultimate midge repellant, AVON Skin-so-soft (a body lotion), apparently used by the Marines.  I have sourced some and will give a report on its effectiveness) 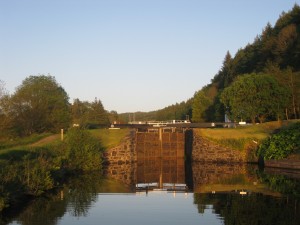 View off the stern of Whinchat…

We used the canal shower facilities and kicked back for a lovely evening.  I was queen of the Ramoska, serving up a dish of minced beef with a garlic bread crust!  Perfect.  We swapped photographs and laughed a great deal over the antics of the day….