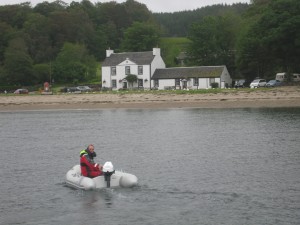 (photo shows the Oystercatcher Pub that we’re moored near, with Pete testing the new outboard).

This morning’s weather forecast was heading back into the ‘rubbish’ camp! Another low pressure system lurking somewhere off Iceland, bringing warnings of gales in our sea area (not that we’re really in it, as we’re more covered by inshore waters).  We were looking at a forecast of SW6, with mist and drizzle.  Our destination today was only 11 miles away, and not really affected by tides or tidal stream, so it didn’t really matter when we needed to set off.  The only deadline was being somewhere to receive Tim (a fellow Rustler owner, now a friend, whose coming to crew us through the Crinnan Canal tomorrow) around 18:30.  It was really gusty through the harbour this morning so we decided to see if the wind might die off (as suggested by the forecast).  We paid a visit to the chandlery – what a find!  We bought a midge mask (it’s a hood you wear, covering your face with a big net…. we are hoping not to use it, but we have to expect a midge invasion of some kind), a head-torch with a red light for night vision and I bought some new clothes… warm weather ones, so hopefully that will mean that the sun will shine.

We left port about 11:45, as the wind had died a bit but also because we were just ready to move on.  Our exit from the pontoon was just perfect!  The wind was blowing enough to take the bow to port, taking the front round as we’d planned, so I slipped the mid-ship and we were off!  It was much more satisfying than our arrival.  By noon we had the sails up, or rather just the Yankee.  We didn’t know what the wind would be like out in Loch Fyne, and we were in no rush, so we rather hoped for a gentle drift. Pete fancied another go at fishing off the back of the boat, which you need fairly low speed to achieve…. well, there was enough wind to have us travelling about 6 knots, far too fast to catch anything! 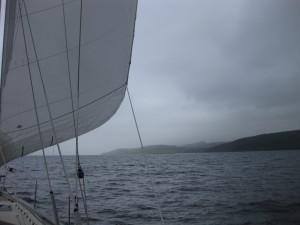 Sailing along under the Yankee, with Scottish mists swirling!

It was easy going, and lovely in a different way to yesterday’s sail… even the rain when it came. 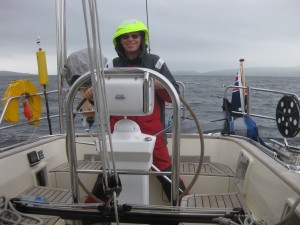 Dressed for the worst of the Scottish weather!

Our destination today is Otter Ferry, shown in the picture at the top (really, that’s all there is, a pub).  The Welcome Anchorages publication said that there were 5 mooring buoys to be had, and the navigation was set to be fairly straightforward, with one section where we’d need to be sharp.  This is through a kind of dog leg, the narrows, between rocks and a sand bar (dries out at low tide, but we were approaching at high tide so couldn’t see anything of it).  Of course, the challenge of the day would be that the visibility completely dropped so that Pete had radar on and I was forward with the binoculars trying to spot the port and starboard buoys ahead of us.  Pete did a super job of navigation, and we even managed a gibe of the Yankee to a starboard tack to get us around the narrows.

Fortunately the mist cleared a little to allow us a decent view of the mooring buoys.  Guess what?  Not 5 of them, but 16, and all of them empty!  Having too much choice is difficult – I thought we were going in to have a look, but Pete suddenly announced that we were ‘going for that one’!!!  I wasn’t a bit ready, so was a bit surprised to have to galvanise myself.  It was a bit stressy, and I kept catching the mooring strop only to drop it again.  Pete came up to the fore deck from the cockpit, and took the hook, so I shouted at him not to just take over… Oooops.  He handed the hook back to me, and this time I made it, dragging the strop to the front cleat.  Job done. 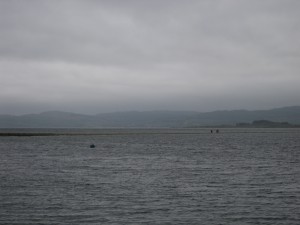 People walking on the sand bar as it dries out (halfway up the picture, 2/3 across)

Otter Ferry is a very pretty location, and it’s nice to be somewhere quiet after so many nights in marinas and harbours.  Although rather unbelievably, given there are 15 free buoys, someone has moored up on the buoy behind us?  Why?  I am tempted to switch the music to blaring out of the cockpit speakers…. But, that’s not really fair either.  Apparently there are sea otters here, we’ve seen oyster catchers (and heard them) and a swallow swooped over the water and came and sat on the guard rails.

As we’re on a mooring, we needed to inflate the dinghy, the first time this season.  It’s a bit manky having sat in it’s cover since the summer.  We’ve also got a new outboard, as some so-and-so nicked the one we had off the back of the boat in Universal Marina (our home port last year).  The new yahama has been sitting on the back of the boat for the last month (under the grey cover, to the left of Pete’s head on the photo above), and it started first time, first pull.  Brilliant.

All there is to do today is wait for Tim to arrive, and then go ashore for dinner at the pub, doubtlessly churning over ideas and strategies for the canal tomorrow….  It’s a hard life! 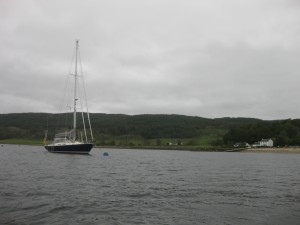 Whinchat on her mooring, Otter Ferry

The pub was one of those absolute gems. The landlord, Tony, was very welcoming of yachties, the service extended by his staff.  The food was delicious, many items from local sources.  I had ‘squat lobster’ as a starter, tiny lobsters with very sweet meat (only tackle the body).  They are fished in East Tarbert and the fisherman usually chuck them back.  I was talking to the chef, who said he’d only cooked them for the first time a couple of weeks ago.  The highlight was an impromptu gig by a few guys from a passing yacht… A guitar, mandolin (or perhaps a banjo) and a guy on the penny whistle.  The pub filled up as the locals came to hear the guys playing.  A couple of hours later, we lurched at the dinghy and went back to Whinchat.  Three rather drunken sailors back on the boat… 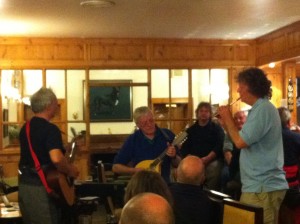 The musicians in the bar….