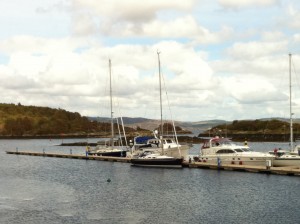 (photo shows us tied up in Tarbert Harbour, we’re the blue boat on the long pontoon, right at the end)

The weather forecast this morning showed a hint of a gale in the air, in the Malin sea area, but hopefully some way off the other side of the Mull of Kintyre.  It also said that rain would come later.  I cheerily reported this to our neighbour, and about 5 minutes later the most almighty downpour occurred… he was most impressed!

We wanted to set off around 09:30, which we managed very tidily.  The guy in the ketch next to us (whom I’d given the weather report to) is very accomplished (he bought his boat in the US, and sailed it back, as you do!) and we left without incident, just slipping off the back of the pontoon.  Johnny had told us that Campbeltown was his least favourite place, but it had been OK.  We knew not to use the public loos or showers… in fact, I nearly didn’t get off the boat at all, so perhaps Johnny was right.  We really used it as a place to rest up.

We were sailing by 09:45, and if ever there was a day when it was wonderful to be on the water, then today was it.  Our passage would take us north, sailing between the mainland and the Isle of Arran, Kilmannan Sound, before reaching the open water of Inchmarnock Water and then heading up Lower Loch Fyne (on that matter, I am hoping for some fine smoked salmon later!) to turn into East Tarbet.  The scenery was just gorgeous, so different from the flat coastline of Northern Island.  Everything was just as we’d hoped today of our cruising in Scotland… the wonderful landscapes, calm seas (well, we can but hope), great sailing winds and blue in the sky.  Today we had all of this!  We even had a boat to race… a charter boat, Bavaria 44, with French guys on it left about 30 minutes before we did, and at 11:40 I reported that we had overtaken them!

(Aside: This is totally up there with our stereotypes, but the French boat was seen turning to port in Arran, I said for lunch.  When Pete and I were walking in Tarbert, we saw a boat mooring on the finger pontoon by simply driving into it – I had seen one crew member casually toss one fender over the side, but the action of driving the boat at the pontoon stopped it, where the crew then stopped off and tied up… Pete says that this is reputedly a very French way of mooring.  Well, it was the same said French crew… so, in this case, our stereotypes have been fully lived up to).

The combination of all the marvellous elements working for us meant that it has been a fabulous day.  We were able to evenly share the helm, and sometimes the wind did fluke around a bit, but we held a port tack for nearly all of the 30 miles we travelled today.   The conditions were so lovely, that I took a few snaps of us sailing along… 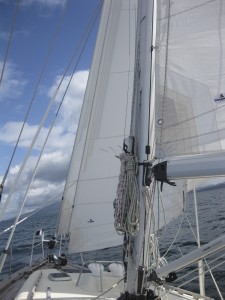 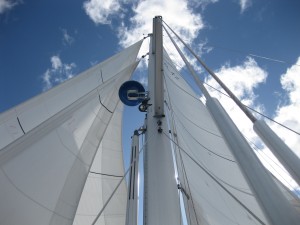 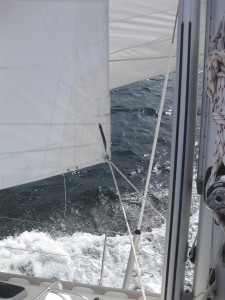 Standing midship and looking down as Whinchat is heeling, kicking up a decent bow wave… 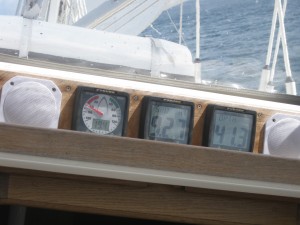 Look!  The evidence of a great wind and cracking speed…

At one point when I was helming, and the wind had faded a bit… we were still going about 5 knots, but Pete emerged with his fishing line…. 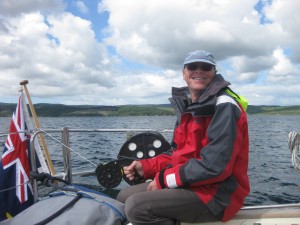 I fancy mackerel sushi for lunch….

I’m happy to report that Pete soon declared that I was sailing far too fast for mackerel to be caught, so he reeled in.  I was intent on beating the French guys at this point, so there was no easing up.  I’m sure there will be other days to catch a fish!

Pete has admitted to me that he’s indicated to some family and friends that I “may exaggerate” the drama of the sea in my blog.  I say two things.  Firstly, it’s my experience, that’s all I can write from.  Secondly, I asked Pete today what the wind speed was.  “Force 3-4, I reckon, but check on the instruments”.  What did they tell me?  Force 5!  Hmmmm.. Exaggerate eh?!

On the final leg of journey today, we were sailing close to the wind to take us up towards the mouth of East Tarbert.  The wind was building and building.  I thought that it was just a gust, but suddenly Whinchat was becoming harder to handle, not wildly, but a bit more uncomfortably.  We reefed twice, taking the staysail away and then reefing the main (the repair that Pete had done was also tested and worked perfectly).  Just bizarre…

Our mooring this afternoon wasn’t our best.  I guess this is the ‘yang’ to the great sail that we’d had.  We were asked to moor on the long east pontoon, as shown in the picture right at the top, behind a large motorboat.  Starboard to… not our favourite to begin with, but Pete got confused by a line of buoys, so cut in, and then he said got worried that we might run into the motorboat, so we didn’t get close enough in to the pontoon for me to jump off…. I managed to lasso the cleat on the dock, but then I got my foot caught in my mooring line on the boat, so I couldn’t tie us off… so we were sort of attached, but not tightly.  The stern was a bit out of control, and I heard the squeaking of gelcoat on wood (and also on the electricity supply box, giving it a look of the leaning tower of Pisa about it).  Pete had to jump off with the stern line (as he was almost on the pontoon anyway) and we had to sweat her in.  All very dramatic for a couple of minutes, but no real damage done.  Whinchat is unscathed, Pete has screwed the bolts tight on the electricity box.  I have a slight bicep strain from trying to sweat us alongside – but shifting 13 tonnes of boat takes some power.

We have wandered ashore, and can understand why the RUYC favour here to Campbeltown.  It is a very pretty fishing port, in a lovely setting. We will dine ashore tonight and try and give full attention to its potential.