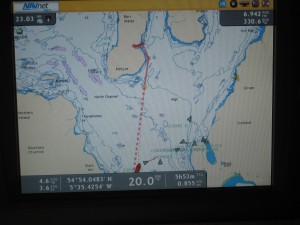 Winds  WSW 3-4 then flitting around NW and dying off!

Despite everything Johnny was doing to persuade us not to head for Campbeltown, we had this as a convenient way on our passage.  We know that there are no showers, the public loos are grim and there’s no food to write home about….  It would only be a resting stop (the weather has turned a corner so no danger of being weathered in)!

Anyway.  I woke up feeling dreadful.  All that wine was such a bad idea!  Great as it was at the time, I felt pretty grim when I surfaced, and only got through the morning on Sprite!  We provisioned in Asda and then only had to wait for 11:00 when the tides were favourable.

I was really pleased to see that Nigel, Joy and Johnny came to see us; we hoped they would!  We made promises to come back on the return, but I’m not really sure we can expect such a royal welcome!

We were leaving Bangor with one of the most favourable weather reports… no strong wind warnings but for a WSW 3-4 which would see us nicely across the open water to Scotland.  We had about 12 knots, Force 3, as we left, exactly on course.  We raised the sails just about as soon as we’d broken port, and I sailed us out of Bangor.  It was a wonderful sail, with the seas so calm, almost smooth… and that’s something we haven’t had since we left Cornwall!  The sun was shining, and I was sailing in a fleece!  No waterproofs!  Another first of the trip.

I was helming to get back the good feelings about sailing.  It was a perfect sail, particularly when the wind picked up to around 16-18 knots and we were flying along on a broad reach. I helmed through to about 13:00, just catching a total downpour (rapid deployment of waterproofs) before handing over to Pete for his turn.  What did he do to offend the wind?  It all but died.  The picture above shows the chartplotter when Pete was helming, his speed was 3-4 knots (bottom left) which showed me that we would have 6 hours to complete to the next waypoint.  No way!  He decided then he’d go fishing, and set the mackerel line running…. which made the wind die even more, so that we were making a knot or two.  Reminders of drifting in the Greek Islands!  Needless to say we switched to engine, meaning we had to furl the two front sails.  And that was us set for the day…. motoring all the way as the winds flipped around, shifting direction but never amounting much more than about 6 knots…. Still, the bonus of this was a completely smooth sea.  Perfect for my delicate state!   It must have been calm, because I made lunch without any adverse effect.  The afternoon passed by unlike any sailing day we’d had…. 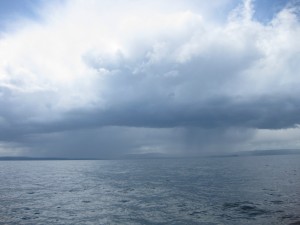 Watching clouds and deciding if we’d get wet or not… 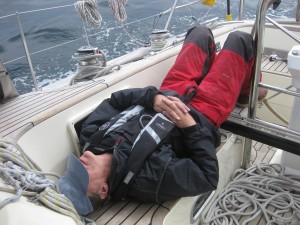 Catching up after a disturbed night’s sleep…. 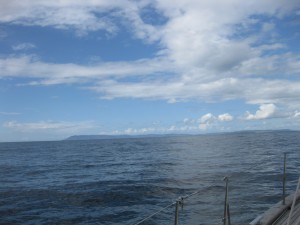 Spotting Scotland (in the sunshine!)

Yes, one of those sailing days when time slips by, and everything is very chilled and calm.  We were reaching Scotland!  It felt like a real landmark to me, after setting off from home at the beginning of May with this mission in mind.  At times I thought we’d never make it here, but that we’d turn south and head for Brittany… However, we’re here, in Scottish waters.  The landscape was already dramatic.  Ailsa Cragg, from distant Geography days memory, is a volcanic plug.  The Mull of Kintyre, a bleak headland, and on the other side, the Isle of Arran…. Sanda Island, where you can anchor in settled weather, looked lovely.  One for another day. 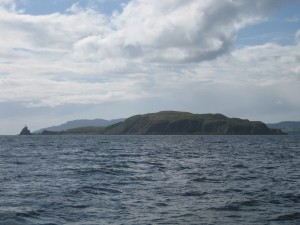 Sanda Island, with the Mull of Kintyre in the background

The wind picked up a little as we came towards Campbeltown, but too late for us to raise our sails.  It was time to think about coming in.  Pete had a minor incident with the mainsail, not really sure what it was, but he was dashing back and forwards swearing a lot…. I don’t think it was to do with the damaged reefing line, but he resolved it OK.

Campbeltown has a visitor’s pontoon, tucked in the far corner of the bay.  We took one of the last places on the pontoon, arriving about 19:00, which was earlier than we had both expected.  That’s a nice change.  The couple from the next boat came to take our lines, which I always appreciate.  Someone has rafted against us (a boat I raced out of Bangor), so it’s not as quiet as I imagined it would be.  No matter, as I don’t think there’s very much that will deter me from a restful sleep this evening! 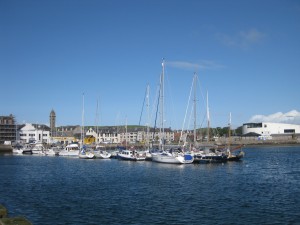 Whinchat on the starboard end of the pontoon (inside the ketch)