We decided that in view of being bounced around so much on Saturday, that we’d reward ourselves a day ashore.  Dull things like provisioning and laundry could be done!

When I was walking back to Whinchat (along the miles of pontoon between the main facilities and the berth, apparently there are 5 miles of wood in the marina), I was stopped by a friendly guy who was wanting to know about our boat, and he suggested to me that we should pay a visit to the RUYC (Royal Ulster Yacht Club) along the sea front.  They had jazz on!  I reported this to Pete, and we decided we’d go for lunch and then go shopping….  The man, Tony as it turned out, said that I would have to change out of my jeans, but otherwise would be fine.

We walked along the sea front, and it was a wild old day, a bit like we’d seen on Saturday and I was very happy not to be dealing with the elements…it was bad enough having boat hair! 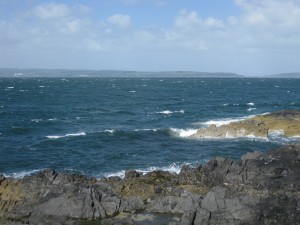 We arrived at RUYC, and couldn’t get anyone to buzz us in.  We were rescued by a lovely couple, Nigel and Joy who signed us in and brought us through to the bar.  We were very warmly welcomed, despite looking like a couple of dishevelled boaties (everyone was very glamorous, and I felt very underdressed, and don’t even go there on my hair, which Pete described merely as ‘big’).  The Rear Commodore, Steve, bought us drinks and took us for a tour of the club.  It has a wonderful history, with a strong connection to the America’s Cup, the J-class races.  There is memorabilia over the walls, and I could have poured over everything for ages.  The club was purpose built, and from the sea (we saw on Monday) it dominates the Bangor’s front. 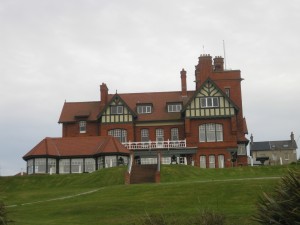 Steve said that he would help us find a table for lunch, but sneakily he was arranging to have his party extended to take us too.  It was a fabulous afternoon, much laughter, sharing of stories and sooooo much wine.  To Steve and Carol, for inviting us in, we are very grateful.  Also to their friends who made the whole afternoon fly by.  Pete and I had arrived about 01:30, and we left around 20:00.  Somewhere in the afternoon there was jazz, and Johnny was dancing!  We came away with a list of places to go (and those to avoid) and a hope that Nigel, Joy and Johnny would come to see Whinchat before we left.

The remains of Sunday are a hazy blur, and I knew that Monday’s alarm would feel particularly cruel.