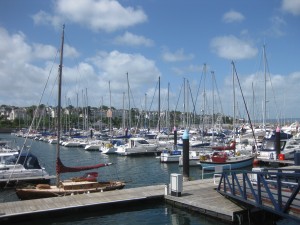 Today was one of those days where sailing turns from being fun to something of endurance.  I’m not sure Mum you should reach much further, perhaps go to the bottom where you read that we are safely tied up, no damage… well, except Pete’s badly bruised wrist.

In view of the long day on Friday, we’d planned for a shorter hop, about 30 NM, which should have seen us tied up about 15:00 – time enough to re-provision and then make something for dinner, almost put our feet up for a couple of hours.  It was none of that.  The exit from the quiet marina wasn’t exactly as planned.  We slipped off, but a gust came from nowhere, meaning that Pete couldn’t steer Whinchat through the wind, so we ended up reversing through the marina and before being able to get her stern to the wind.  It wasn’t dramatic, just not as planned.  Outside of the marina, we hit the most unexpected swell!  Whinchat was being bounced around as we rolled through these waves!  I had to abandon my duties of stowing the fenders and mooring lines as I was in danger of making myself seasick (and it was a day when we’re not being sponsored by Stugeron, as I reckoned my sea legs were good enough, and the weather forecast wasn’t so bad, only a mention of a Force 6… yes, we’re still in strong wind warnings, but the forecast was for the W to back SW and decrease…. reckon they got that wrong)!  It seemed the roly-poly was worse in the bay, but it didn’t really let up.  Moderate you might say, but we were being chased down by waves of 1-2 metres.

We managed to raise the sails (Doris wouldn’t steer into the wind because of the roly seas, so I had to helm us as Pete sweated up the mainsail).  Of course the wind was behind us on this leg of the course, which stresses me (see yesterday’s blog for reasons why).  Pete did accidentally gibe at one point, so the boom came crashing across, but fortunately the wind wasn’t blowing too strongly, and nothing got damaged.  Perhaps Pete’s pride, a little.

We swung more west in our course, so we had a glorious sail for an hour or so.  The wind was across the beam, giving us a beam reach.  Yes the sea was a little bumpy, but with 16-20 knots, Whinchat was able to slice through the waves, so it didn’t seem too bad.  I had more layers of clothing on, including my foulie trousers, so I was warm.  After the unpleasant roll out of Ardglass, the sailing day was shaping up well.  Suddenly the wind seemed to just die off.  We were sailing, but our speed had fallen to around 4 knots, at times less.  It was odd.  Pete then went to make a cuppasoup – it must have been around 12:30.  He was down below for all of five minutes, when wooooosh… the wind came back, with a strength that startled me.  The sails were filled, and we were steaming along like a train.  7-8-9 knots… The teak decks on the starboard side were running under the water.  Pete was using the loo at this time and he said later it was the first time he’d seen water rushing by.  It was a bit of a battle for me on the helm, but nothing that felt out of control.  Accompanying the wind was an approaching squally rain shower…. I got completely soaked in a matter of minutes.  My hot soup was very well timed, with Pete taking over as the rain stopped.

The wind just seemed to accelerate, with a shift towards the nose.  This made it more hairy, because of the point of sail.  I said that we should reef the main.  I managed that as Pete stayed on the helm.  The wind wasn’t for quitting and shortly after we reefed again.  We then needed to swap the yankee for the staysail, to balance out the sails.  I couldn’t furl the yankee, so it took two of us to sweat it in, with Doris struggling to steer our course.  This is where things get scary, when the sheets (lines) for the yankee were slapping and flailing in the wind.  Pete thought something was jammed, so we decided that the reefed yankee would have to do, so the next job was to tighten in the sheets…. They had caught on the guard rails, and were flapping around wildly.  Pete had to go forward to free them, and in return got slapped on the wrist, taking his watch off.  He said it was like being hit by an iron bar!  I wasn’t quick enough on the winch, Pete shouted at me and then took over, madly winding for all he was worth.  It was a horrid moment, with the wind up around Force 6-7 (30 knots) gusting 8 (35+ or gale force).  With the badly reefed yankee, Whinchat wouldn’t point very well, so we were making a rubbish course.

To add to the drama, two tugs were pulling a massive gas rig across the water ahead of us, and Pete was worried that we couldn’t steer us, so we heaved-to in the middle of this turbulent sea with the wind howling around us.  We had stopped dead, giving us a chance to catch our breath.  We plugged on, Pete having taken us on a course change.  There is a passage through Copeland Sound, which we’d planned on taking, but the pilot books give all sorts of cautionary tales about it.  In view of the conditions, we were on a course around the island, meaning we’d go across the bay and have to tack back in.  However, because Whinchat’s sails were not well set, we were basically tacking back and forward across the bay, inching inwards.  It was really rough here too, apparently a classic wind over tide scenario (as we learned later).  I watched the Stranraer Ferry come out of port, and about the point where the sea went very lumpy, he turned around and headed back.  I reckon he just didn’t fancy it, but Pete’s not so convinced.

The matter of the tank gauges meant that we didn’t exactly know how much fuel was in the tanks, so Pete had to estimate what we thought we had.  He reckoned we had two hours of fuel.  The chart plotter was suggesting we had about 75 minutes to run, which looked ok!  The sea was heavy, and I think we were against the tide so we crept up towards Bangor, with the seas only easing as we got close in.

We couldn’t raise the marina team on the radio, so arriving was stressful.  We needed fuel, but had no idea where the fuel pontoon was.  The wind was still high, and although there was some shelter, it wasn’t an easy arrival.  Pete spotted the fuel berth, so I had to do a rapid laying of fenders and lines…. I only managed to get the mid-ships done, and the two marina guys must’ve thought we were pretty hopeless.  We filled the tanks, only taking on board 140 litres (we have a 325 capacity tank) so we had way more than we thought.

Anyway.  F-15 was our designated space for the night.  It was tucked right up in the marina, giving good shelter.  We passed it on the way in, so Pete had to execute a complicated manoeuvre, which brought a motorboat owner scrambling to the deck, I think he was worried that we were going to come in next to him.  For the first time, Pete hadn’t got me close enough to the pontoon, I couldn’t jump the gap… so I executed a new trick, lassoing the cleat. It worked.  It was a very satisfactory feeling, and it was such a relief to be tied up.

What a day.  There are many different kinds of sailing days, and today was one of those which was endurance.  Not much enjoyment for me, and I don’t think so for Pete either really.